Dragonette and Major Lazer performed a concert that featured Diplo in a hamster ball, shirtlessness, and no babies (18+ only). 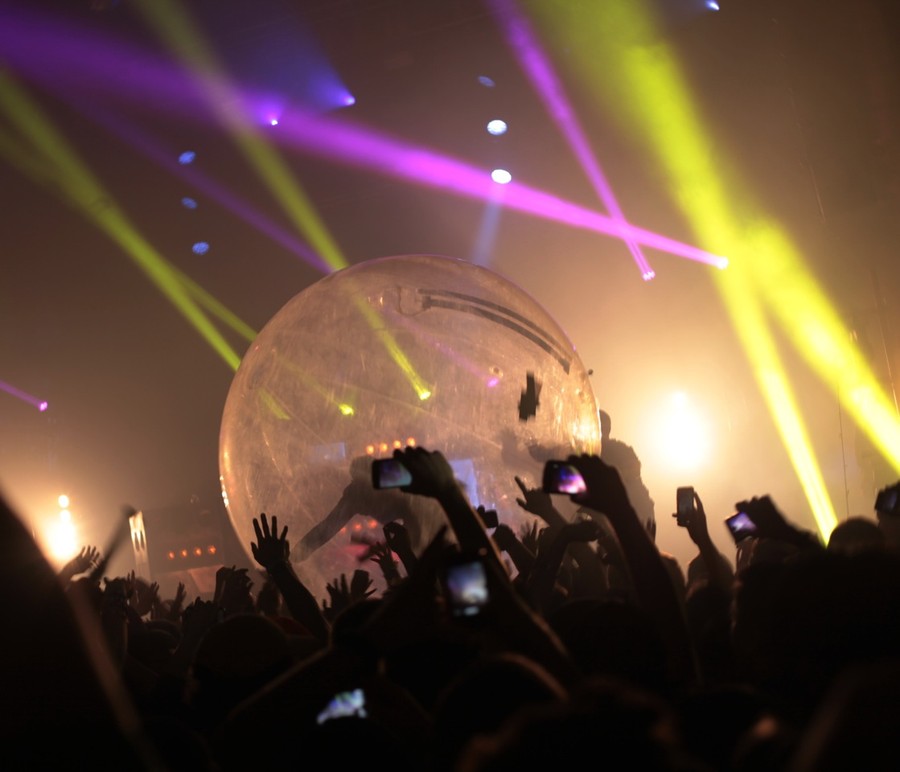 A diverse and young crowd gathered last Saturday in the Congress Theater to see Major Lazer perform. However, ‘young’ doesn’t mean too young. No entrance was granted to those without 18+ IDs. The audience was varied; some members clearly came to rave and were dressed in neon clothes that barely covered decent amounts of their bodies, others patiently sweated through their very hip sweaters.

There were also many readily apparent advantages to having a dance concert in Congress Theater. The lower deck of the theater isn’t seated, and thus audience members have 20,000 square feet of space in which to dance and nod their heads to the beat. Overall, the theater holds 3,500 people for live music concerts, making the ambience of the place during shows particularly lively.

The main opening act was Dragonette, who was extremely popular in Europe two years ago due to its hit song with famous D.J. Martin Solveig, “Hello”, which reached number one on the Hot Dance Club Songs chart in the United States in February 2011 and was numbered in the Top 10 of 10 different countries.

Although doors opened at 7 p.m., Dragonette came out around 9 p.m. The mood was excited but not adrenalized until more people had time to arrive, just in time for Major Lazer to come out. A screen, which had shielded part of the stage during the opening acts, lit up with an image of Major Lazer’s band symbol—the Jamaican commando who lost his arm in the secret Zombie War. The volume increased and the screen fell, revealing Diplo, the Canadian D.J. and the most famous band member, as well as the two new members of the band, Jamillionaire and Walshy Fire, who both performed admiringly alongside him.

Although Major Lazer started out between Diplo and another house D.J., Switch, they parted ways in 2011 having released only one album, Guns Don’t Kill People…Lazers Do. Now with the new permanent members Jamillionaire and Walshy Fire, the band is getting ready to release its latest album Free the Universe.

Musically, the show was a great example of the band’s varied body of work. Its song choices were never limited to a specific genre; it would always shift between hip hop, dancehall, and electronic dance, and the performance finished with its top hit, “Get Free”. These organizational choices left the audience engaged for the entire two-hour performance.

Major Lazer kept the audience entertained and busy throughout the entire show. About 15 minutes into its set, it brought out huge hamster balls. Moments later Diplo and Walshy Fire were rolling around on top of the audience in these gigantic balls. Needless to say, the audience was ecstatic.

However, the audience participation in the action on stage was not limited to the hamster balls.  The show was extremely interactive, and when the recent hit “Harlem Shake” came on, Major Lazer restarted because it was unsatisfied with the audience’s ability to freeze before the bass came on. At one point in the performance, Diplo urged audience members to take off their shirts, and the majority listened to him without hesitation. Following a few minutes of waist-up nudity, the band suggested that everyone throw their shirts up in the air, and many listened, resulting in lost clothing and a euphoric audience.