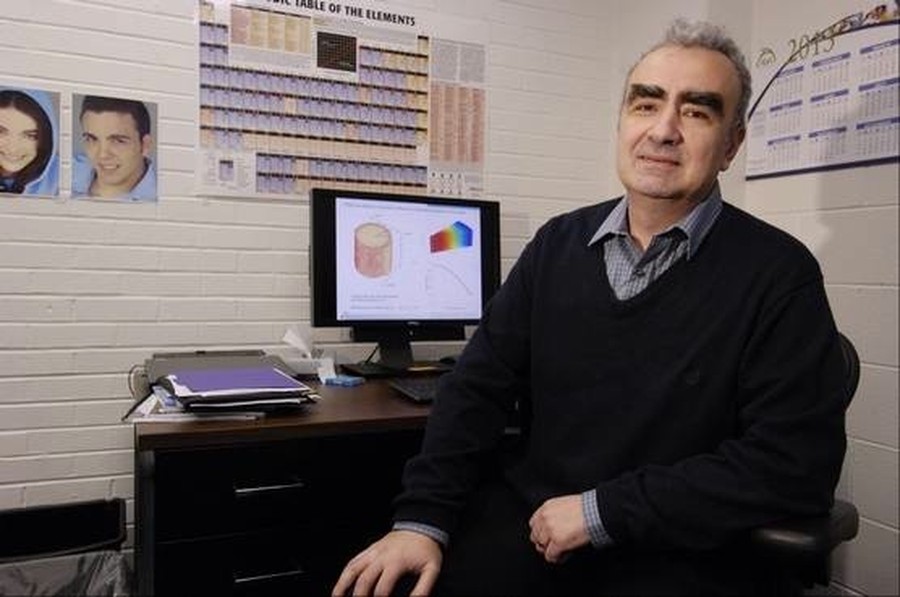 Landing both an IMDB profile and a Ph.D. in chemistry, Marius Stan, a scientist at the Argonne National Laboratory and the University of Chicago, is in limited company. When he’s not in a lab coat, Stan plays Bogdan Wolynetz, a recurring character on the hit TV series Breaking Bad.

The nuclear engineer stumbled into the world of acting by chance. While Stan was living in New Mexico with his family and working at the Los Alamos National Laboratory, his children discovered that the pilot of Breaking Bad was being filmed in nearby Albuquerque in 2007. They wanted to audition for background roles, so he and his wife accompanied them to the set.

Stan went with no intention to act, so he was surprised when the director asked him to read a line. “I said sure, though I wasn’t convinced I should do this, but it was all the excitement at the time,” Stan said.

Thus, the character of Bogdan Wolynetz was born.

Wolynetz, fittingly nicknamed “Eyebrows” in reference to Stan’s prominent brows, was the owner of the local car wash where Walter White, the lead character played by Bryan Cranston, worked part-time in the show’s first season. He was marked by a thick Romanian accent and expletive language use during violent interactions with White.

What was intended to be a one-time appearance snowballed into a larger acting deal for the scientist. After appearing in the pilot, Stan’s character returned in the fourth season with a more consistent role in the series. So far, he has appeared in five episodes of the show and was recently set up as one of the likely antagonists to kill Walter White.

“It’s quite interesting how it evolved. I didn’t think that this would go any further, but then I got called back maybe once a year for small scenes. I never thought it was going to become this popular,” Stan said.

Though there is a Facebook page devoted to his character, Stan has tried to keep a low profile. When he moved to Chicago in 2010, no one from his work life knew about his acting career, and for a while it remained a secret.

“I do not advertise the fact that I acted in this series, but people found out somehow. Some of my colleagues discovered this more than a year after I joined the Argonne National Laboratory and the University of Chicago,” he said.

Strangers, too, sometimes identify Stan in his day-to-day life. “Occasionally, a few times a month, I’ll be recognized on the street, in a coffee shop, or in all kinds of weird places by people who never remember my name,” said Stan, who laughed while recounting some of his more awkward encounters. “Some people actually recognize me but don’t say anything. I just sense that they figured out who I am, but they are too shy to say anything and they just take pictures from a distance.”

Nonetheless, Stan prefers to keep his acting as a private hobby. “I don’t like to label myself and I don’t tend to label people by profession. I do many things,” he said. “I’m a scientist, occasionally an actor, I’m also a father and a soccer player. It’s hard to pick which one is better. I like them in different ways, and I’m happy with the way things are.”

In the future, he plans to continue his career as a scientist first and foremost while pursuing only occasional acting roles.

“I think that I’d like to, for the time being, keep this rather light,” Stan said. “Of course, I cannot predict what’ll happen in the future, but I would enjoy doing more of this in the years to come, and Chicago’s a great place for doing that.”