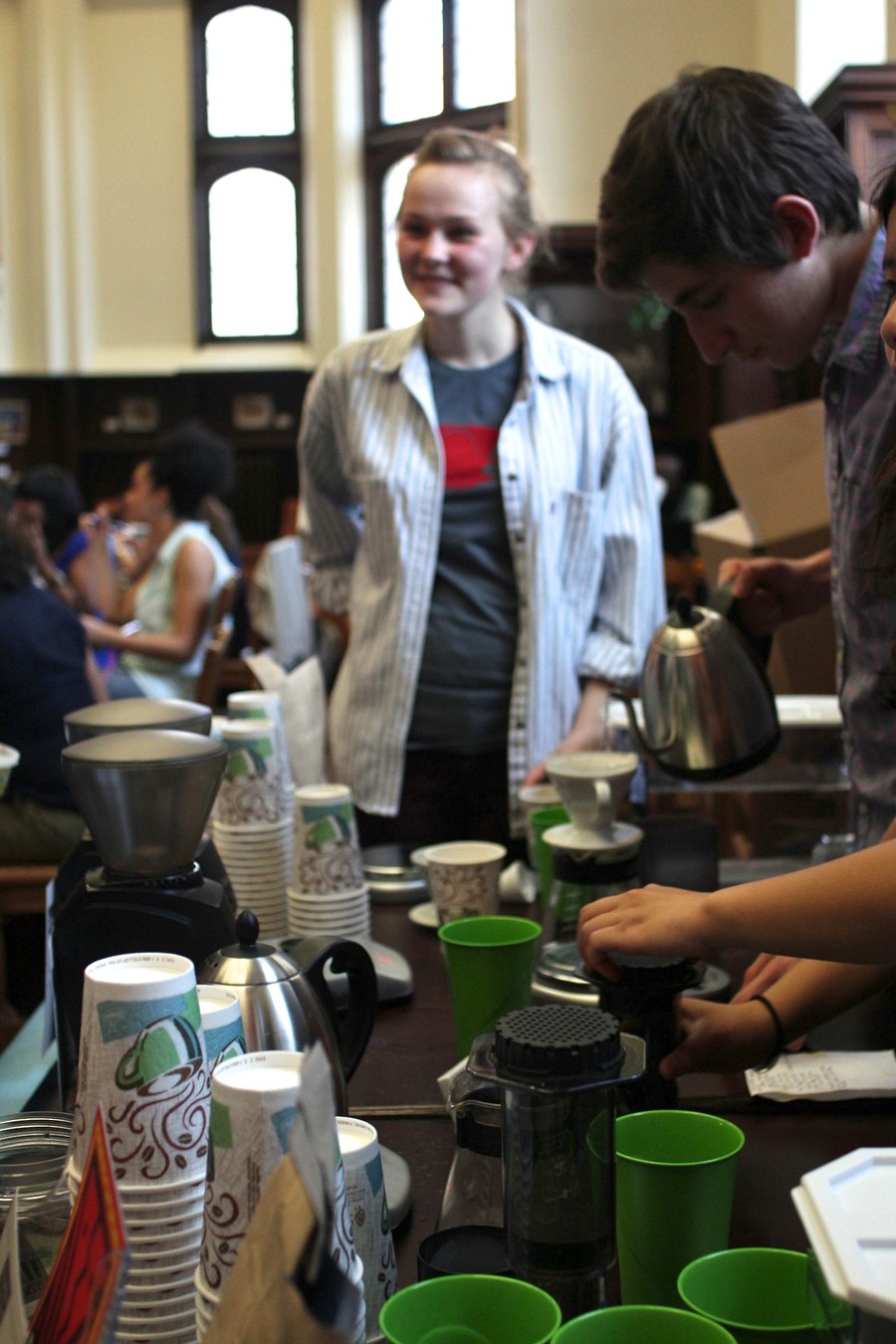 Courtesy of the DotCross Coffee Project

]As temperatures soared above 80 degrees for the first time this year, students lined up in Common Knowledge Café in Harper to sample piping hot specialty coffee at the dotCross Coffee Project’s first pourover bar. Winners of the 2013 Uncommon Fund, the members of dotCross have pledged to change the way the UChicago community thinks about coffee. The team consists of five members who advocate consuming coffee as a pleasurable experience rather than simply as liquid fuel, as they demonstrated on Tuesday with a plethora of facts and figures about the art of coffee brewing.

What makes their coffee so different? According to second-year Aaron Goh, one of the original brains behind dotCross, it is the group’s commitment to preparing coffee using the most sophisticated methods. A “cup by cup” brewing system means the coffee beans are ground on the spot for the individual coffee drinker, lending a vibrant freshness to each brew. Their coffee-making process calls for an exact ratio of coffee to water (1 gram of coffee to 15 grams of water), and the use of burr grinders as opposed to blade grinders to crush the coffee beans fully, releasing more oils and hence more flavors from the beans. They don’t add milk or sugar.

“When coffee is really good, you can taste the nuances of the black coffee on its own... it’s like tasting wine,” Goh explained. Coffee, according to Goh, has even more flavor compounds than wine.

The first coffee I tried was the “Tairora Project,” made from beans from Papua New Guinea. As someone who avoids drinking coffee black at all costs, my initial reaction was that it needed milk and sugar. However, as I slowly kept drinking the coffee I began to pull out individual tastes, and there was a smoothness to the brew, instead of the usual bitter and overly-acidic qualities of black coffee. I personally couldn’t discern the “berry” notes advertised by the dotCross team, but, by the end of the cup, I had noticed a rich, complex taste.

The other coffee at the bar was the “Nueva Llusta” from Bolivia. I liked this one less, because it had a thinner taste, though the team said this may have been due to the pourover technique rather than the infusion method that they were using for this particular coffee. Goh used the word “earthy” to describe the taste, and second-year dotCross member Kirsten Gindler said the team had intentionally used two contrasting coffees to help people build their coffee palate.

“Drinking coffee like this requires a different mindset. You have to look for qualities in it as you’re drinking it,” Gindler said.

In order to make the pourover bar possible, dotCross has relied on various forms of support. The Uncommon Fund has financed their equipment, but Counter Culture Coffee, a coffee company specializing in sustainability and fair trade, has provided the group with free coffee beans and barista training sessions. DotCross also travels downtown weekly to attend free coffee-cupping sessions at Intelligentsia, which are elaborate, sommelier-style coffee tastings. With this support, dotCross can currently provide high-end coffees to students for free, with suggested donations to the Seed Fund, which helps local social change start-ups.

DotCross plans to open its pourover bar twice more this quarter, and three times in the fall. With goals of working with iced coffee, bringing Counter Culture Coffee to the Logan Café, and eventually becoming an RSO, their agenda is busy as they seek to introduce their gourmet coffee approach on a campus where coffee is abundant, but taste is mediocre. Sustainability, quality, and accessibility—they’re all part of the meaningful pursuit of caffeine.