A night with the HP Knights 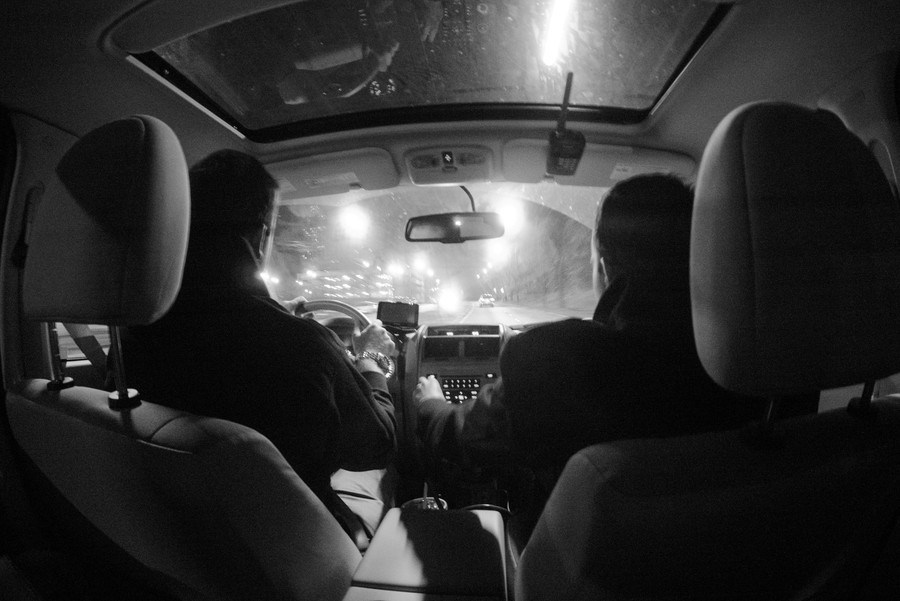 Editor’s Note: Names have been changed to protect the safety of the sources.

Something about the way a man is pacing along East 52nd Street doesn’t look right to Alex. He thinks that the man is looking into cars for something worth stealing. Not wanting to give himself away, Alex tells Ben, who is driving the car that they are both inside, to circle the block. He says that if he sees the man looking into car windows again, he is going to call the suspicious activity in to the police.

“We might even catch a criminal tonight, guys,” Alex says.

Alex and Ben, students in the College, experience moments like these regularly. They run the Twitter handle @hpknights and the Facebook page UChicago Crime Feed, where they send out snippets of what they hear happening locally on Chicago Police Department (CPD) and University of Chicago Police Department (UCPD) radio frequencies. They drive to the scene of crimes that they think are notable in the UCPD patrol zone, which extends from East 39th Street to East 64th Street and from Cottage Grove Avenue to Lake Shore Drive and South Stony Island Avenue. Armed with their smartphones, two police radios, personal cars, and no formal law enforcement training, they have over 1,300 followers on Twitter, nearly 2,000 on Facebook, and have become one of the most consistent, real-time, public sources of crime information in Hyde Park.

It was Alex’s own curiosity about crime happening around him that led him and two friends to start listening to a police scanner that he inherited from a student as an underclassman. Once he started listening, he was struck by the kinds of calls that UCPD received on a regular basis.

“They weren’t bullshit calls,” he said, adding that he listened to police responding to “dangerous situations” such as domestic disturbances and batteries in progress that often had nothing to do with students or the University. Figuring that there might be other people interested in what he was hearing, he began tweeting.

At first, few people followed the Feed, but gradually, the tweets began to gain traction. As the number of followers grew, the Crime Feed expanded from Twitter to Facebook, reaching an even broader audience. After a while, only Alex ran the Crime Feed, and he began to drive to the scene of the crime as officers responded, sending out real-time updates–including pictures–of what he heard and saw. Alex recruited Ben and one other person this academic year to help him and to take over the Crime Feed when he graduates.

Alex said he considers the Crime Feed an unfiltered “form of journalism,” which provides the public with a more holistic picture of area crime.

“I’m certainly not gonna affect people’s opinions about incidents, but at least I can let them know that these incidents happened,” he said. “Once students become more aware of where these events happen, when they happen, how they happen, maybe students will take greater steps to protect themselves.”

The Feed’s short, direct dispatches offer followers a glimpse of how police respond to crimes in real time, providing a service that UCPD and CPD do not. UCPD posts daily incident reports at least 24 hours after incidents are reported, and CPD publishes crimes a week after they occur.

Alex is quick to note that the Crime Feed is not a substitute for law enforcement.

“I’m not a vigilante, I’m not a cop. The best tool I have is my phone. Or my Twitter account,” he said.

But sometimes the Crime Feed and law enforcement intersect. In November of last year, Alex said he was on the scene of a burglary where police were able to catch two of the three men involved. Listening to the radio in his car, Alex saw a man turn the corner who fit the description of the third man. He quickly flagged down a nearby police car and pointed out the man, who was then arrested. Recently, followers have also started to submit tips to the Crime Feed, but Alex says that he refers them to police detectives.

“I don’t think we can be of much help there. We’re not a detective agency,” he said.

Alex says that he has seen prostitution and drug dealing and has been on the scene of shootings, murders, burglaries, assaults, and numerous other crimes while reporting for the Crime Feed. Even though he says that there is an “adrenaline rush” and a sense of danger that he feels going to a crime in progress, ultimately what sticks with him is the impact of a crime on the victim.

“Once you really see a few of these happening, you realize that these are people’s lives. This is not a show, it’s not a movie,” Alex said. “For the victim this was terrible, and will likely stay with them for the rest of their lives depending on what happened.”

On that frigid November night when Alex spotted the man walking along East 52nd Street, the UCPD radio, hooked up to the speakers in Ben’s car, was quiet.  In just over an hour of driving around, most of the calls that came out over the radio were officers calling in traffic stops. Only one incident came over the radio that Alex was interested in responding to: a residential burglar alarm going off. As Ben drove to the scene, Alex tweeted: “1322 E 50th St: Burglar alarm activated. Kitchen entry door.” After watching police arrive on scene, Alex and Ben waited until a dispatcher radioed that the situation was clear.

Alex carries the radio with him throughout the day and will often plug in his headphones to listen while doing homework at the Reg. He and Ben take their personal car to any incident unfolding that catches their attention. Alex prioritizes his work for the Crime Feed over schoolwork, when necessary.

Given his time commitment to the Crime Feed, it has been difficult for Alex to hide involvement with the Crime Feed from friends. Out of safety concerns, however, he generally prefers to remain anonymous.

“It’s not something where if I’m at a party and a stranger is talking about it I’ll be like ‘Hey, that’s me,’” Alex said. “I didn’t want [Alex] associated with locking up this burglar two weeks ago. And also, I didn’t want someone to think of me when they read the Crime Feed.” While he frequently arrives on scene with police officers, he says that there has not been an opportunity where he needed to introduce himself to them.

Anonymity can have its downsides. Alex says that he has met people who think that the Crime Feed is a parody, and has overheard others who think it’s a UCPD account even though the feed clearly states that it is unaffiliated with the University.

After Alex and Ben circle East 52nd Street three times, the man that Alex found suspicious is gone. The lack of activity on the radio doesn’t seem to bother either of them, and both say that a quiet night for them is a good thing.

Asked whether he might consider pursuing a career in law enforcement, Alex says he is unsure. He does, however, admit that he has long been fascinated by police work.

“Everyone when they were a little kid was enamored with the police, wanted to be a cop,” he said. “I just never lost it.”