British songstress Lily Allen sticks it to the man with Sheezus 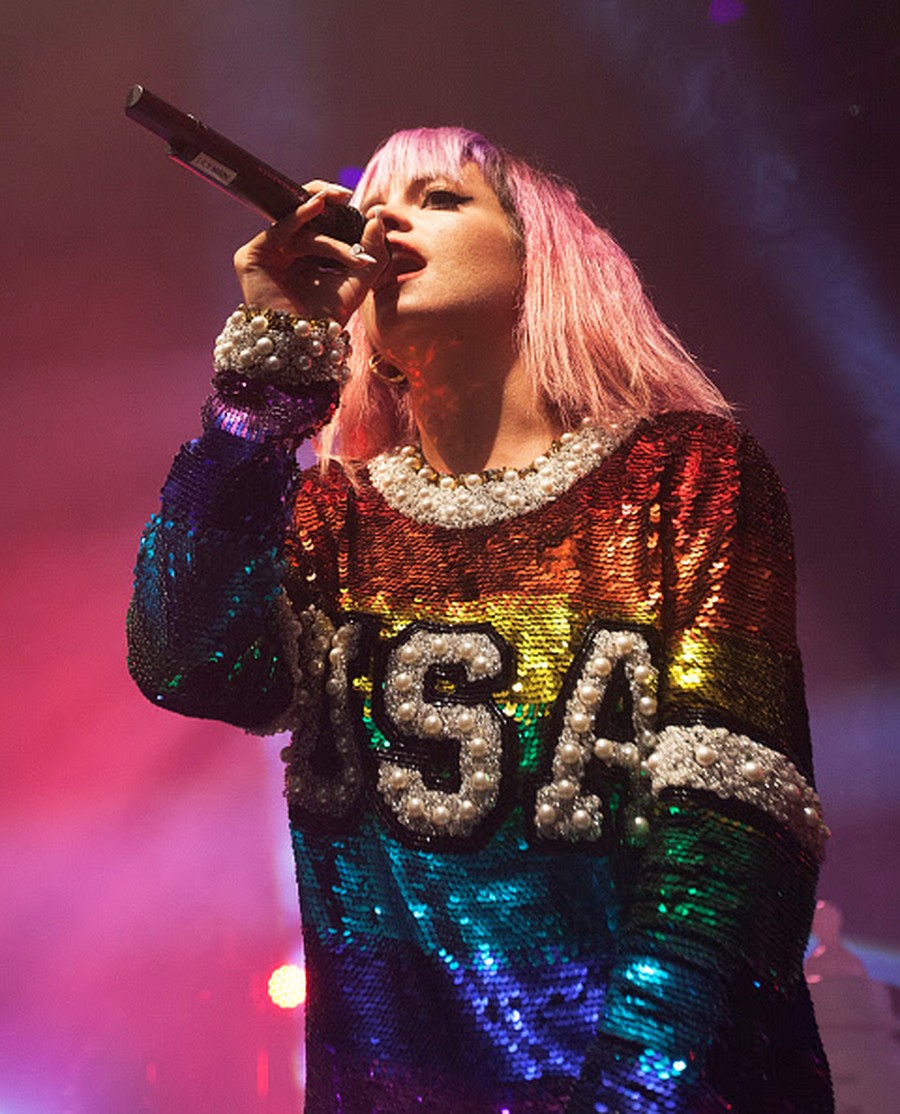 Tuesday night of first week, I found myself enraptured before all the outrageousness that is British pop star Lily Allen, my hands in the air, singing along to each and every song. When she giggled, I giggled. When she stroked one of the giant light-up baby bottles on the set (she’s gotten married and had two kids since her last tour), I gasped. These are the hallmarks of a true diva. After taking five years off recording and performing to start a family, Allen’s new album Sheezus proves she’s still got it.

I never thought my relationship with pop music would come to this. Going into the concert and buying my ticket, I swore Allen’s act had to be just that, an act, and that my job as a skeptical concertgoer was to laugh at her derisive lyrics and ridiculous outfits (a sequined dress with a jersey reading “Lily” and a bottom with pink frills and baby bottles), and join her in the game of making fun of what pop music has become. But after enjoying myself, I’m not so sure. To pull from Allen’s “22,” “[He’s] thinking how did I get here, and wondering why.”

When I was first introduced to Allen in 2011, it was through her music videos, which accentuated the persistent wit and social commentary of her lyrics; she actually seemed to be saying something while the rest of the pop-diva heap seemed stuck on senseless repeat. Now I’m starting to think I am her ideal target, precisely because I haven’t sworn loyalty to any American divas, and I haven’t been seduced into their exclusive cults and Twitter wars. In that sense, I was a blank slate for Allen’s own flavor of pop to impress upon.

Still, I’ve always thought of my relationship with Allen as ironic. I would share her videos mostly to provoke laughter at their outrageous excess and superficiality, as typified by her 2009 “The Fear”: “I want to be rich and I want lots of money; I don’t care about clever, I don’t care about funny/ I want loads of clothes and fuck-loads of diamonds; I heard people die while they’re trying to find them./ I’ll take my clothes off and it will be shameless, ‘cause everyone knows that’s how you get famous.” By taking such pop clichés to their limits, Allen simultaneously parodies her competition and beats them at their own game.

When you hear Allen’s interviews, it’s clear that this song isn’t just a façade. She does want to be famous and says she’ll do basically anything to achieve that, including releasing some pretty tasteless songs and videos—see 2009’s “Not Fair,” about women stuck with impotent men, set to an outright silly country-western tune. Then of course there’s “Fuck You,” written about George W. Bush, which has become a catchy liberal anthem. “You think it’s not OK to be gay, well I think you’re just evil” is followed by choruses of the title. Even if her songs are satire, there’s something intoxicating about how well done they are, not only in the catchiness of her lyrics but also in the sharp cultural criticism they pack.

A 21-year-old Allen’s first album Alright, Still (2006) cemented her public image in Britain as a charming and refreshing London girl with its easy-listening light pop hits “Smile” (a No. 1 hit in the UK), “LDN,” and “Little Things.” Performing “Smile” on Ellen in 2009, Allen sported a cute white dress, always wore a smile, and had an old-style, three-piece horn section playing behind her. This was the pop genre from which she soon deviated.

Her 2009 It’s Not Me, It’s You (which opened at No. 1 in the UK) begins with pop interventions and goes into numerous social issues. The opening track “Everyone’s At It” cries out, “Why can’t we all just be honest/ admit to ourselves that everyone’s on it/ from old politicians to young adolescents/ prescribing themselves anti-depressants.” From her very first album, she’s especially focused on feminist issues—“If I buy those jeans, I can look like Kate Moss”—but sharpened her criticism in “22”: “When she was 22 the future looked bright/ she’s nearly 30 now and she’s out every night…/ It’s sad but it’s true how society says her life is already over.”

For her Sheezus tour, Allen ditched her cute white dress for obnoxious sequined jerseys and her three-piece horn section’s stepping and swaying for a troupe of female backup dancers. In the show’s finale “Hard Out Here for a Bitch,” an in-your-face feminist bash of Robin Thicke’s “Blurred Lines,” her dancers put on rubber dog masks and shimmied and twerked exhaustingly until you got the picture: “Forget your balls and grow a pair of tits/ it’s hard out here for a bitch.”

Her new album’s title song “Sheezus” is even more contentious and proves Allen isn’t afraid of making enemies. “RiRi isn’t scared of Katy Perry’s roaring/ Queen B's going back to the drawing/ Lorde smells blood, yeah, she’s about to slay you/ Kid ain’t one to fuck with when she’s only on her debut,” begins the chorus. Allen makes a feminist parody of Kanye West’s Yeezus by presenting the world of pop as a wrestling match to the death. “Give me that crown, bitch./ I wanna be Sheezus,” Allen swears, calling comparisons of her to other divas “dumb” and “embarrassing.” She evidently wins the match, turning into a Christ figure: “Be nice to me, I’ll make you one of my disciples.”

But Allen makes clear in “Sheezus” that comparing her with these divas is futile. Right in the middle of her seamlessly executed “Sheezus,” she drops a loaded bomb: “It makes me angry—I’m serious/ but then again, I’m just about to get my period./ Periods, we all get periods/ every month, yo, that’s what the theory is.” Critics found these lines tasteless and confusing, and indeed they seem to serve no purpose besides breaking a pop taboo. Yet when asked to explain the lyrics on Twitter, Allen downplayed her feminist intentions and flatly claimed, “My intention was to write a song.”

Her irreverence soars to new heights in her video to “Hard Out Here” when we see her dancing around giant silver balloons spelling out, “Lily Allen has a Baggy Pussy.” Whether this is ironic or genuine attention grabbing is pointless to speculate. The message Allen proclaims with “Sheezus” is that she is her own animal, and she’s staying that way.

Lily Allen just finished a tour across the U.S. and performed at Chicago’s Riviera Theatre in Uptown on September 30.