Cannibals blend right in on new season of The Walking Dead 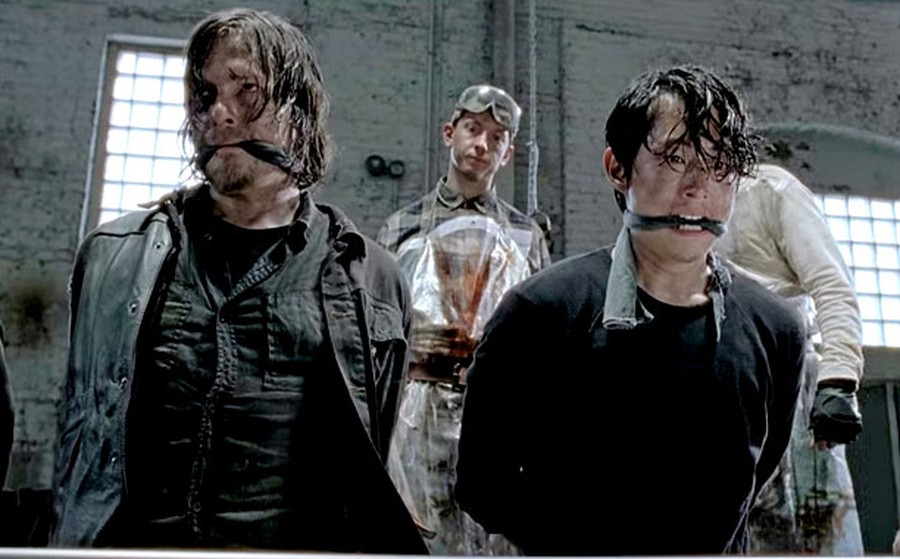 Sometimes it is easy to forget that AMC’s The Walking Dead is meant to be a horror show. That’s partly because the genre is so rare on television, FX’s American Horror Story notwithstanding. It’s also because of how overt the show is in its scares. Classical cinematic horror relies on hiding and deception, whereas The Walking Dead earns its keep from buckets of blood and gore, matched in quantity only by the show’s camp. The show seems to fall in the action genre more often than not, featuring more thrills than chills.

Soon to be the last remnant of AMC’s once-formidable crop of excellent dramas, The Walking Dead was and remains the most inconsistent of those shows. The first season was a revelation for fast-paced, high-production-value thrillers on cable, while the second opted to slow down and develop a cast the writers had previously shown little interest in. The third season was a master class in building tension, but bungled its finale so badly that half of the fourth season was dedicated to trying to fix it.

We start out the fifth season with our survivors in the captivity of the cannibals who run the supposed safe haven of Terminus. They manage to escape and torch the place, but are then hunted by the surviving and still hungry Terminians. In the course of running away, they meet a reclusive priest played by Seth Gilliam, who joins Lawrence Gilliard Jr. and Chad Coleman in the show’s ongoing quest to reassemble the supporting cast of HBO’s The Wire. Rick (Andrew Lincoln) and friends are immediately distrustful of the pastor, and with good reason.  From zombies in the barn to the Governor to Terminus, the show has made such a habit of setting traps within facades of safety that by now betrayal seems more like a matter of course than a real question. “Not everyone can be bad,” argues Rick’s son Carl (Chandler Riggs), but if he truly believes that then he does not follow The Walking Dead very closely.

And that’s just it: The thing we sometimes forget about The Walking Dead is that the zombies from which the show draws its premise are often not the source of its actual horror. It’s the people, or more specifically what people are capable of doing to each other, that cools the blood. The first two episodes of the fifth season seem intent on reminding the viewer of just how bad we can be, and they could not be better for it. Our heroes don’t get offed right away by the cannibals, but we see several unknowns disposed of in truly brutal fashion, even by the increasingly violent standards of cable television. Zombies tearing the living flesh from the bones of screaming victims somehow fail to match the horror of the clinical throat slitting that is the preferred method of slaughter by the denizens of Terminus. Despite their temporary reprieve from this, it only takes until the end of the second episode for one of the leads to suffer a fate the cruelty of which could only be devised by TV writers.

There’s an inevitability to that fate inherent in The Walking Dead and other kill-’em-all shows like HBO’s Game of Thrones. There’s a pact between viewer and creator that we’ll get our fill of all the violence and mayhem we crave, but in exchange we have to bear the trauma of watching these characters suffer. These scenes seem to question our perversions as viewers while at the same time encouraging us to bask in them. The action scenes are less complicated in their construction. There is no guilt and little horror, only a well-shot and well-choreographed mix of hand-to-hand and gun-based combat with humans and zombies alike. Unlike in some of the more personal and visceral moments, here the living and dead blur together, the only important distinction being killed or yet-to-be-killed.