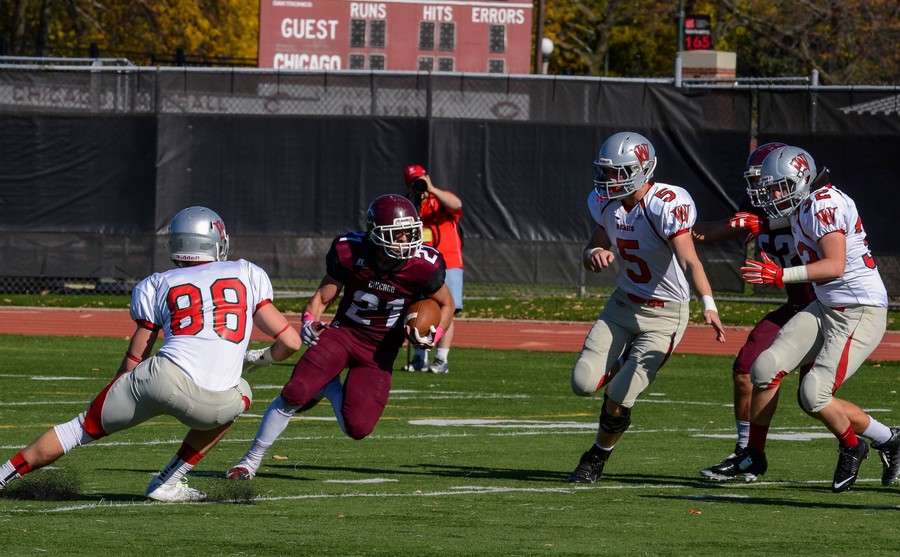 After eluding Chicago for the past three years, the prize has been found.

Over Homecoming weekend, the Maroons (6–1) beat UAA rival Wash U (2–5) for the first time since 2010, by a score of 44–23. In the victory, Chicago captured what the Bears owned during that period: the Founders Cup.

Wash U opened the game with a field goal, but the Maroons came surging back, scoring 30 unanswered points between the first and third quarters, putting them ahead of the Bears 30–3.

Fourth-year running back Zak Ross-Nash led the charge, with 100 yards rushing and three touchdowns in the victory, but hugely credits his blockers.

“[T]he big guys did an awesome job of opening up holes all over the field, which allowed me to have the success that I did,” Ross-Nash said. “Yesterday was the epitome of a team effort.”

The defense played a large role in the effort as well, causing the Bears to turn over the ball four times on three forced fumbles and an interception.

“When we were able to hold Wash U to a field goal, we got a little bit of momentum to swing to our side, and the offense was able to capitalize on that momentum,” said second-year linebacker Jackson Garrey. “They played well all game, and we were able to help them do that by getting them the ball back.”

Garrey forced two fumbles during the afternoon and collected the Maroons’ only sack.

Third-year receiver Sam Coleman, who led the Chicago receivers with three catches for 76 yards and a touchdown, also gave the defense praise for giving the offense all the opportunities it had.

“[G]ive credit to the defense,” Coleman said. “[T]hey gave us great field possession and opportunities to score on short fields.”

Coleman also felt that Chicago’s early attack with the running game threw off the Bears’ defense.

“We were able to be successful passing the ball because of our ability to run the ball early,” Coleman said. “They were forced to focus more on the run, which allowed us to exploit different holes in their defense.”

Although the fourth-years were especially proud to finally defeat Wash U in their final season, the team knows that there’s still plenty of work to be done.

“It was a great feeling coming off the field on the winning end yesterday. However, we know the season is far from over,” Ross-Nash said. “Our goal is to compete competitively every day—no matter who the opponent is—win UAA, and earn a playoff bid. We are going to do everything in our power to accomplish that goal.”

Garrey emphasized the need to  focus only on forces within Chicago’s power.

“If we continue to play at a high level, we’ll put ourselves in a great position to win our last two games,” said Garrey. “All we can do is control the controllable, take care of these next two games, and then see what happens.”

The Maroons take a weekend off next Saturday and play against Carnegie Mellon at Stagg Field on November 8, which will be Senior Day. Kickoff is at 12 p.m.