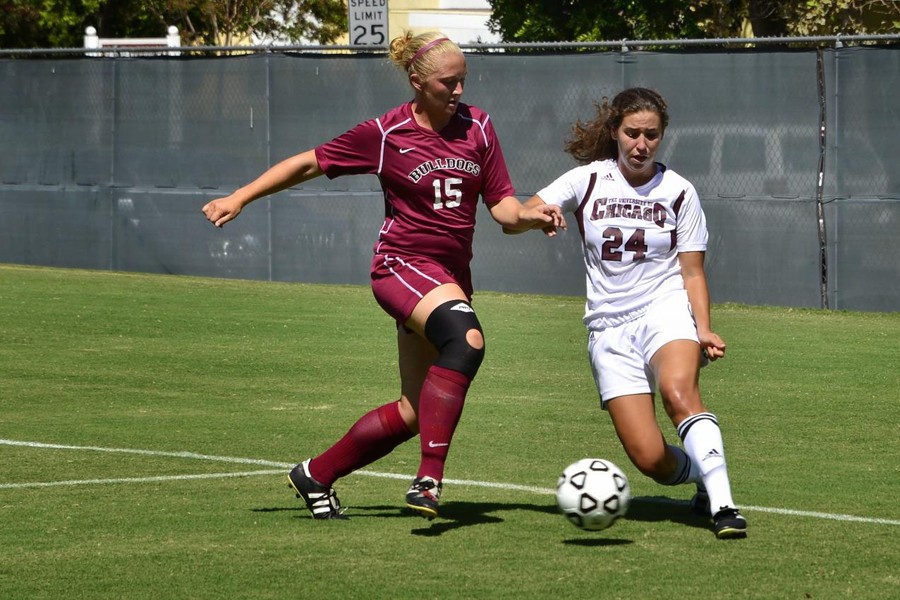 The No. 16 Maroons kicked off their national championship run at Stagg Field this past weekend. The winner of their regional tournament would stay alive in the national tournament, while the other three teams would head home and wish for better fortunes next year. As such, it was with a sense of urgency that the Gorloks of Webster University faced the Maroons in the tournament’s opening match.

However, the pressure of elimination also comes with a certain bit of nervousness. It was with a very reserved nature that each side started the match on a balmy Saturday morning. Each squad adopted a very defensive mindset for its opening match of the tournament, and it showed in the relatively passive attacks in the first half. Further, each side was plagued with ball-handling errors as a combination of nerves and high winds made good touches elusive.

It was in this sloppy manner that the first half seemed destined to conclude.  However, in the 41st minute, after a great through ball, third-year striker Mary Bittner was able to put a good shot on goal. Goalkeeper Jessica Davis was able to make the initial save, but the ball lingered in the penalty area. A veritable rugby scrum formed around the ball. Amid the pile, third-year striker Julia Ozello was able to land a clean foot on the ball and guide it into the back of the net, giving the Maroons a 1–0 lead.

The Gorloks seemed frazzled. They had yet to register a single shot on goal and were clearly in need of changes after the first half. However, the Maroons stayed on the attack, and should have doubled the lead when first-year center back Kaitlin Price won a free header at the edge of the six-yard box. The put was just wide though, and a minute later the Gorloks headed to the warmth of the Ratner locker room to make halftime adjustments.

It didn’t help. The Maroon defense shut them down. Throughout the match, Webster was able to muster only four shots, and not a single one of them was on frame. The Maroons were only slightly more probing, putting only two shots on goal, but once the first struck the netting, the rest did not matter.

As such, it was with relative comfort that the Maroons moved through to the regional final against the winner of the match between Augsburg and UW–Oshkosh, set to begin shortly after their victory over the Gorloks.

After an Augsburg victory in overtime, the bracket was set, and the Maroons prepared to take on the Auggies the following afternoon.

The Maroons came out strong, winning two early corners.  However, the home side was unable to capitalize. With pressuring play in the first half, the Maroons trapped the Auggies in their defensive third. The Augsburg back line, helmed by goalkeeper Marissa Guillou, was up to the task and was able to hold the Maroons scoreless until the halftime whistle.  However, if they wanted to win in regulation, the Auggies would first need to muster up a shot against fourth-year goalkeeper Jacinda Reid, who, through 45 minutes, had yet to be tested.

The second half progressed similarly, as the Maroons seemed to continuously apply pressure to the Augsburg back four.  Finally, in the 71st minute, the Maroons broke through. Fourth-year midfielder and team captain Sara Kwan threaded a through ball between the Augsburg center backs and found a streaking Ozello. She cleanly slotted the ball past the Augsburg goaltender, giving the Maroons a 1–0 lead.

It was then that the floodgates opened. 12 minutes later, a searching ball from goalscorer Ozello found fourth-year forward Meghan Derken, who was able to double the lead with a well-placed header.

“It was pretty cool,” Derken said. “It was nice to know we had nailed the coffin on the game.”

The Auggies appeared drained, and their defeat was imminent as only a minute later the Ozello-to-Derken combination culminated in a sublime header into the top-left corner of the net.  The Maroons took a dominating 3–0 lead and held onto it until the final whistle.

“As a senior, I’m happy that everything is coming together this season, and I’m excited to continue playing with this great team,” said fourth-year defender and team captain Katie Shivanandan.

On the back of this victory, the Maroons advance to the Sweet 16 of the DIII NCAA Tournament. They will take on Illinois Wesleyan (16–6–1) Saturday, at noon, on Stagg Field.

“[We’re] really excited for next weekend,” Derken said. “This time around we are going to be more focused. There is more at stake this time.”