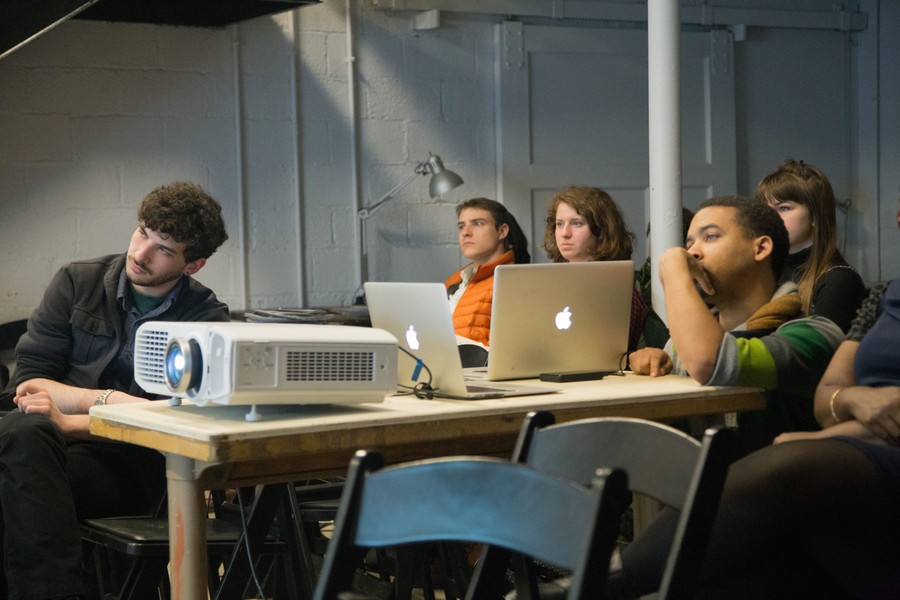 In time for Valentine’s Day, South Side Stories premiered its first set of digital stories at the Gray Center Lab in Midway Studios Thursday night, with videos created by local youth that centered fittingly on the emotions that come with first love and relationships.

As part of the Center for Interdisciplinary Inquiry & Innovation in Sexual and Reproductive Health (Ci3), the South Side Stories project is run by a cross-disciplinary collection of graduate students, scholars, doctors, and artists who plan to study the creation of narratives produced by students of different genders, ages, and neighborhoods to supplement statistical public health research. The first in a series of local presentations, the premiere drew around 20 audience members.

“It’s a unique medium,” Ci3 Communications Manager Lauren Whalen said. “It’s really a way to encompass all the different facets of storytelling. All the voiceovers in the South Side Stories are the students’ own voices telling their stories, which we thought was extremely important because it’s them giving voice to their own experiences, and there is a lot of power in that.”

Ci3’s founder and director Melissa Gilliam said that she sees the film project as supplemental to the organization’s quantitative research on teen reproductive health and relationships.

“We decided to bring the people we study into the picture,” she said as she introduced the stories. “Using narrative is so different from what you get with a clinical study. There is a lot going on with this project, but tonight we highlight these voices.”

The Chicago Black Gay Men’s Caucus, Global Girls, and the YMCA connected participants with the project, which resulted in the production of 50 short films. While one aim is to share these stories, the program also provides students with free training in photography, video, and editing skills.

Digital Storytelling Manager Steven “Seed” Lynn has been working with students in weekend workshops at the Logan Center since last summer, collaborating with participants aged 13 to 24. Lynn led discussion among the audience Thursday night following the presentation of each story,  in which he explained the group process of crafting effective narrative and visual components.

“It still shocks me how much you can get a story pulling on your heartstrings in two minutes with just voices, images, and text,” he said. “We are really a listening project. We provide tools for storytelling, but also we help give proper tools for listening.”