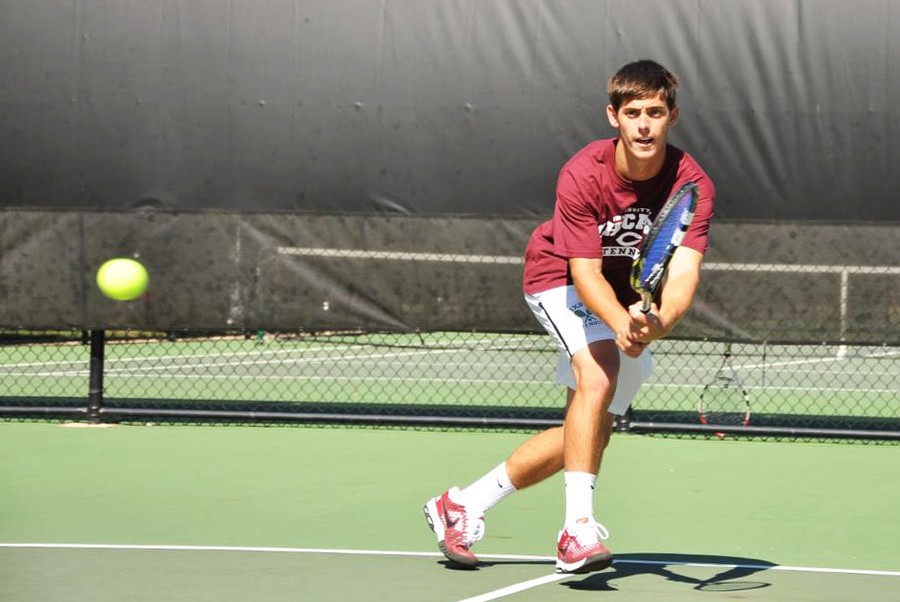 Chicago Maroon: When did you start playing tennis?

CM: Isn’t that a little late to get to the game?

PM: Yeah, I’d say, comparatively, it’s late. But I’d played other sports up until then, like hockey, soccer, and lacrosse, so I had the athletic side of things, and I just had to learn how to play tennis at that point.

CM: How did tennis become the sport that you focused on?

PM: One summer my coach said to me something like, “You have some talent, but if you want to go further, you should drop your other sports and really devote your time to tennis.” And I remember I laughed at him, but eventually, I found it to be true that tennis was the one I had the passion for and that I liked the best. So I made the decision to drop [the others]—hockey and soccer were the toughest to drop.

CM: Those seem like pretty different sports, hockey and tennis. How does hockey translate to tennis?

PM: I’d say, objective-wise, for sure. But, athletic-wise, they translate pretty well. The muscles for lateral movement in tennis and skating in hockey are actually the same. And they say they’re actually two of the best cross-training sports to have. But that was definitely not my intention when I was playing the two of them.

CM: So when did you know you would play in college? Were you recruited, or trying to be?

PM: I was definitely trying to be recruited…. It’s kind of a crazy story. I wanted to play in college, but during the recruitment process I was actually willing to give it up. I was choosing between Hamilton and Bates, and I actually verbally committed to the Hamilton tennis coach on the accepted students orientation day. Then I got off the wait list at Washington & Lee…And all the while I had been on the wait list at UChicago. The past tennis coach told me she could get me in, and she got me onto the wait list. I found out from UChicago that I could get in after a gap year. But, long story short, I didn’t get recruited to play here, but I e-mailed the coach and got a walk-on spot, more or less.

CM: What are the differences between high school–level and college-level tennis?

PM: I’d say the biggest thing is that people don’t give up. Playing tournaments throughout high school, you could almost win the match in the first game; if you dominated somewhere early in the match, they would give up. You’d see a lot of scores like 7–5, 6–0...In college, you’ll see a lot more three-set matches. You’ll see someone get crushed in the first set 0–6 and then battle back and win the next set in a tiebreaker…I’d say skill-wise, there are bigger serves, bigger from the baseline, and less unforced errors.

CM: Do you follow professional tennis? Who’s your favorite player?

CM: Are there any sort of little guys you like?

PM: In terms of little guys, Wawrinka, the guy who just won the Australian [Open]. I was actually at the Australian last year when he lost to Djokovic...I was at that match, and it was heartbreaking to see that. But to see him win it this year was incredible. I love that tattoo on his arm. He has a tattoo on his forearm that says something like, “fail, fail again, fail better.” It’s awesome.

CM: How do you feel about American tennis in general? My father’s always talking about how it used to be so much better; he’s a huge Pete Sampras fan. And you know, now there are just so many fewer people with that name recognition doing well.

PM: The thing with American athletes is we’re just spread too thin. We have basketball, football, soccer—hardly even soccer, hockey. All the best athletes aren’t going to tennis. I wish I could say I see a trend in the other direction, but it’s one of those things where the start-up cost is too much for something to take fast action. For example, by that logic, I see lacrosse becoming a growing sport because it costs basically nothing for it to start up. That’s why, in the rest of the world, soccer is a huge thing, because the start-up cost is basically nothing. And then you have countries like Spain, where their main sports are soccer and tennis. But in America, we just have so many sports that tennis in America, unfortunately, I don’t see a huge increase. But that said, I think people like Ryan Harrison have potential. People like John Isner. We’ll see what happens. There’s definitely some players. It’s just not a huge pool.