Vignettes and Hyperlinks: The view from down here 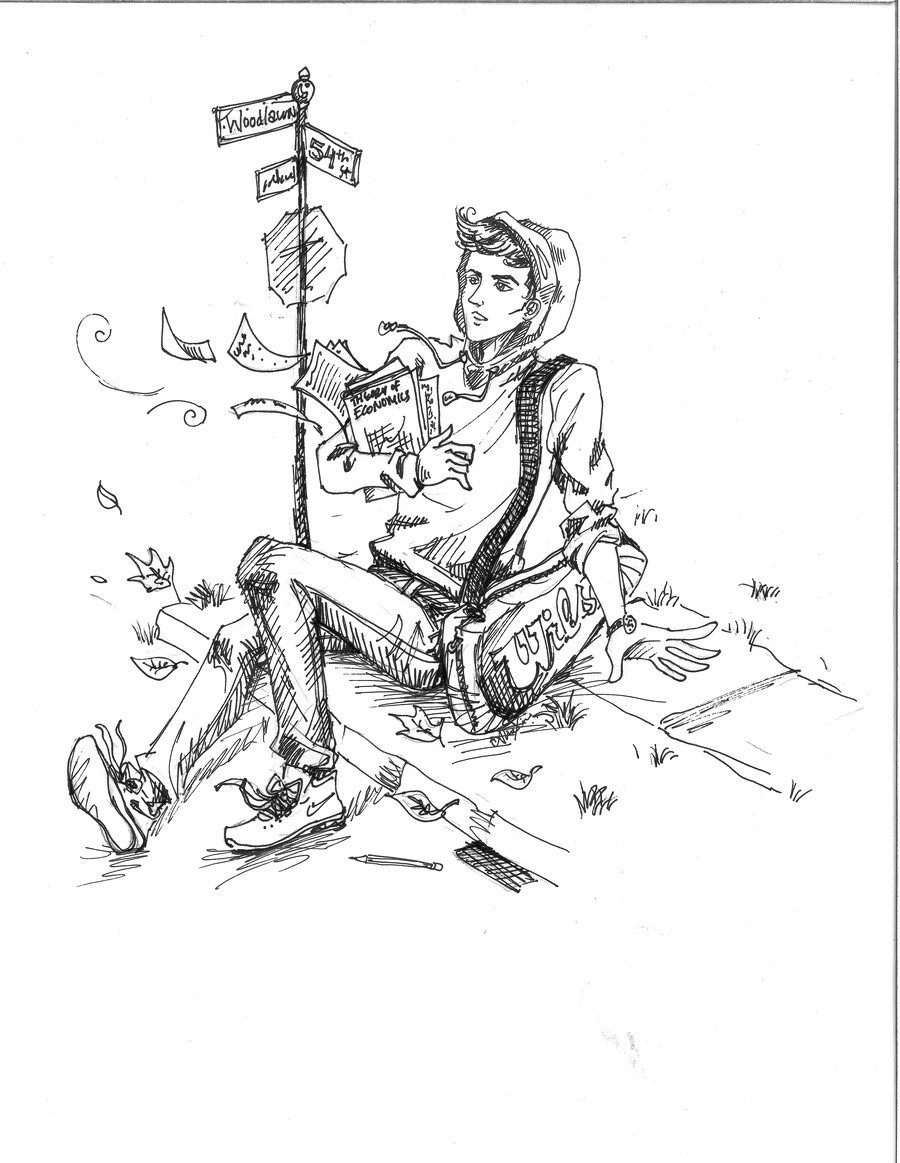 I’d like to say that I started my third decade auspiciously—that I emerged from my teens resilient and collected, in a state of controlled calm. But dude, shit was hitting the fan.

The midnight hour found me at my kitchen table, trying to remember what in the name of the Trix rabbit the kernel of a matrix was. I guess “remember” isn’t really the right verb, as its use supposes that I knew at one point, which I didn’t. No, I was actually just reading the solutions manual so that I could finish my homework and go to bed. It’s not something of which I’m proud, mortgaging knowledge and morality for a few more hours of sleep. I’m still not really sure which is more valuable.

Anyway, whatever the means, I finished (mostly) and went to sleep. Three hours later I woke up, rushed frantically around my apartment to compensate for the extra 20 minutes I’d accidentally slept, and ran down the stairs and out the front door. I thought I was late for the team van to practice (I wasn’t), so in my haste I jumped the last foot from my doorstep to the sidewalk. I was born around 6 a.m., so as it happened I turned from 19 and vertical to 20 and horizontal.

I landed on my ass, looked up, and saw the world for the first time as a 20-year-old. And the damn thing didn’t look any different.

It’s apparently become a Viewpoints tradition to write about turning 20, and I thought that was kind of stupid until it happened to me. But there’s something about the age of 20 that the Liams of yesteryear viewed as responsible, grown-up, and important. But this Liam doesn’t really see the difference, hear the change, or smell the transition. He’s just trying to get a few more hours of sleep.

There’s something weird about realizing that all the people I thought of as mature when I was little probably felt the same as I do now, and really as I did then: small. I don’t mean small in a necessarily bad way, or in a whiny, petty way. I rather mean small in the way that we all feel unimportant, insignificant, made so by the sense that no matter how we search for meaning—low and high, far and wide, undulatingly and flatulently—we’ll still look like we lost our keys.

My upstairs neighbors have arbitrarily taken to playing music very loudly the past few days, and MAC has taken to slightly less arbitrarily turning off our water the past few weeks. As I write we’ll be sans water in T minus seven hours and 50 minutes, and my neighbors are listening to “Teenage Dream.” It’s a rough life (see, as long as I self-deprecate about my problems in order to implicitly acknowledge that I come from a solidly middle-class family and attend an elite private university and have running water [mostly {Is this like math? Can I have nested parentheticals?}] and have things paid for by loving parents, you won’t think I’m an asshole. Although I probably killed that with this parenthetical [and the whole nesting thing]). Kind of funny that they’re playing “Teenage Dream” though, right? Seeing as I’m just now no longer a teenager? You get it?

I ran out of toothpaste, and I keep forgetting to buy more, so I’ve been using my roommate’s. Sorry, Brendan. (Or am I using Gus’s? Which one of you uses Colgate Total Advanced with Whitening?)

All right, this post is reaching “But what the fuck, you know?” territory, so let’s bring it back around. I didn’t actually finish my math homework before I went to bed. I left a little to do in econ the next day. Then my teacher caught me doing it, and he was just like, “Doing a little linear algebra?” And Bobby and I just started laughing because, well, yeah, I was. And he said, “That’s OK,” and he laughed too. Bobby and I laughed it off, and Sebastien Gay laughed with us.

I find myself laughing it off a lot. I laugh off my Kramer-like entrance into my third decade, I laugh off the holes that are in my tennis shoes, and now my socks, and probably my toe soon. I laugh off all the jackwagons that comment on columns in our newspaper and everywhere else on the Internet and tell people to stop writing, shut up, or transfer.

There are a multitude of places this post could now go. I can tell you that I’m an idiot for laughing, and that I should stop trivializing my problems and realize that they’re not a laughing matter; that I ought to take my issues seriously and seek to correct them, and that you should do the same. Or I can tell you that we all need to relax about our problems and gain some perspective, to stop sweating the small stuff and just try to enjoy ourselves. Either of those would make for a nice, clear moral with which to walk away, both for me and for you.

Or I could leave it right here, tell you that I don’t give two falafel what conclusion you draw or what you take away from any of this, or what you take away from anything I think. Hear what you want to hear, believe what you want to believe, I really don’t care what you do. Not just because I don’t know you, not just because you probably go to UChicago and I therefore no longer possess any interest in your thoughts and opinions, and not just because directly addressing the reader is a dramatic way to end an article. But because I have no idea what’s going on, and, more importantly, I’m all out of falafel.

But my sister texted me after reading my last post and asked if I could make the next one happy. I told her I’d try, so we’re gonna go with the happy ending here.

I fall on my ass a lot. Sometimes literally, but more often figuratively. And I fell on my ass a lot in the first hours of my third decade. Actually, it was more like I just spent the entire day on my ass, trying to get up to no avail. No matter how I tried, pushed, pulled, and squirmed around—when all was said and done I think I set a one-day record for most butt scoots—I couldn’t separate my bottom from the ground. But you know the thing about the world from down here, from a toddler’s height? (There I go, addressing the reader again [what a douche bag {I know, right?}]) The damn thing doesn’t really look any different.

Liam Leddy is the blogger behind Vignettes and Hyperlinks. He is a second-year in the college majoring in economics.