A bold new retrospective at the Museum of Contemporary Art. 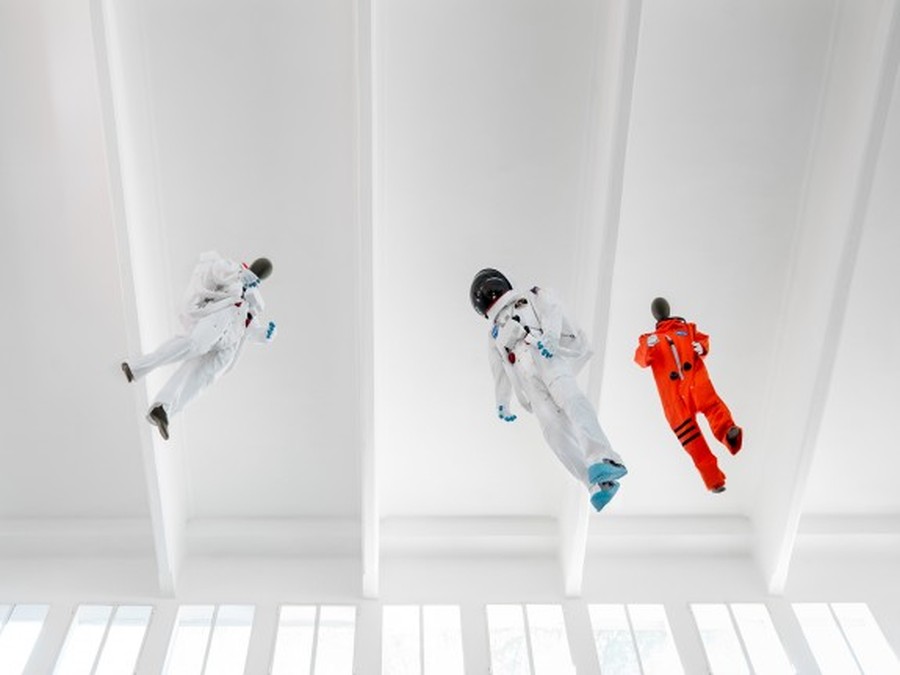 Courtesy of the Museum of Contempory Art

It’s 10 a.m. on a sunny Friday morning, and I’m on the fourth floor of the Museum of Contemporary Art (MCA) downtown, standing among a crowd of older news reporters and a bunch of mannequins dressed in what looks like the regurgitation of Tumblr’s wild night out. Razor scooters and Hula-Hoops, park ranger uniforms and knock-off Burberry blazers, and plastic Easter eggs and sheets of synthetic hair coat these otherwise naked plastic models, who are scattered in clusters along the entryway of the soon-to-open Isa Genzken retrospective. They seem to be sort of engaging in half-baked, awkward conversation with one another, floundering around in their own self-conscious appearances. I take another look around at the heap of press representatives and notice the same thing.

Michael Darling, the MCA’s chief curator and number-one proponent of this whole exhibition, arrives dressed impeccably in an oxblood corduroy blazer. He excitedly taps on his microphone, and we all gravitate around him as he starts to describe the 200-piece, 40-year-long body of work that comprises Genzken’s first show in the United States since her installation at The Renaissance Society in 1992. Without further ado, we veer into the first gallery on our right and try our best to disperse throughout its small space.

Five colorful and sleek woodworks hover just off the ground on a subtle plinth, pointing perpendicular to the straight path between the room’s entrance and exit. Using a neat, gridlike thrust, these objects effortlessly disrupt the space of a room otherwise too easy to slip through. The sculptures thrust out, parading in a flurry of desert hues and neat cuts of expert craftsmanship that complicate their generally elliptical shape. Despite their sharpness and size, the group doesn’t quite register as a threat, nor are they exactly human. By some shared association, I suddenly want to lie down among them: maybe to narrow the gap, or an effort to dilate my body like theirs. It’s somehow more relieving than surprising when Darling reveals an anecdote of Genzken’s studio practice: in her own efforts to warp space in ways that real human bodies just can’t, she was known to lie on her studio floor for hours at a time.

For every smooth contour and polished surface the first room offers, there’s a raw imbalance to counter it in the next. The warmth and clarity of her ellipses vanishes under a series of sculptures started in the mid 1980s, made with welded metal, dyed resin, and cast concrete—it feels like a bunch of skeletons bumping elbows. But the chaos isn’t all there is, and once you begin to navigate the loops of movements created by their positioning, the structures all start to stitch together. What is at first suggestive of abandoned architectural models and scraps of debris soon evolves into cities, bodies, and homes. Indeed, as her practice rounds the bend of the ’80s and enters the next decade, Genzken’s “Pile of Rubbish” morphs into “Diana” and other named subjects. As her technical skills improve, her cast concrete works flesh themselves out and expand to gain an unprecedented stability: The growth is as formal as it is symbolic.

The room splits off into smaller functions that offer up a variety of material: A photographic series, a short film, and even a light-based installation feel like little whispers of an artistic practice growing outwards, not just along. Framing sculptures near the back of the gallery is “Basic Research”: a series of large mounted paintings, unanimously earth-toned and somber, that look vaguely like fossils and very much like carefully rendered topographical illustrations. I’m shocked to learn that they’re all mucky byproducts of Genzken’s studio work: As she lined the floor with canvas, debris from her welding and casting activities fell, solidified, and was then stamped onto separate canvases by a phototransfer technique. Genzken washed over each image with thick but transparent paint, and the end result offers all sorts of gorgeous textures and contours that project from the wall yet maintain an air of muted contemplation.

I enter into the next room and awaiting me there is her take on the 9/11 tragedy: “Empire/Vampire—Who kills death?” (2001–2004), composed of six motley sculptures, kitsch abound, and—get this—four scraps of airplane window frames mounted side-by-side, the last one drenched in a spasm of synthetic polymer paint. Making my way around the fake wall at the next room’s center, I’m met face-to-beak with a chrome spray-painted Donald Duck figurine: Clenching a fistful of money, hot-pink eyes ablaze, he looks like the spitting image of the villainous Corporate Boss.

I turn around to see what, for me, is the most successful and simultaneously inexplicable installation in the show: Oil XI (2007), a piece all about control in the post-9/11 world immersed in the War on Terror, which is so fantastic because the work isn’t. Over a dozen tagged suitcases covered in laminated images of domestic animals, most housing a fake plastic owl, are scattered beneath three full-scale fabric-and-plastic space suits that hover like gods. The abandoned suitcases are spooky, no doubt channeling some graveyard vibes, but I sense with a bit of embarrassment my own relief in the absence of people: the noise of screeching babies and sticky, tearful goodbyes; and all other elements of the general chaos of a bustling airport.

The final room is a come-down for me and I couldn’t be more grateful, or impressed: The panoptic astronauts and horrific middle school flashbacks generated by pictures of kittens and Daschunds (I can’t be the only tween to have cleaned out entire stocks of Office Depot Prrs and Grrs notebooks in one swoop) pulled the exhibit to a fever pitch. The works here in many ways return and add bulk to the motifs that Genzken experimented with in earlier decades: From architectural sculptures made from pricy and stable furniture to a video surveillance piece of Ground Zero, she harkens back but isn’t going in circles so much as spiraling upward. The work seems comfortably settled in its predictable unpredictability.

I leave the gallery feeling more engaged than burdened, on a buzz from newfound appreciation for Genzken’s work, and mixed with awe. Her “Actors” (2013) are still lined up along the outside, looking like her number-one fans, and again—like so many other works in the show—I find myself drawn into their world. The exhibit is immaculately staged: Darling and Co. have crafted a perfect performance, one that can be seen again and again.

“Why is it that black American culture has never put itself forward as a currency, as having value?"