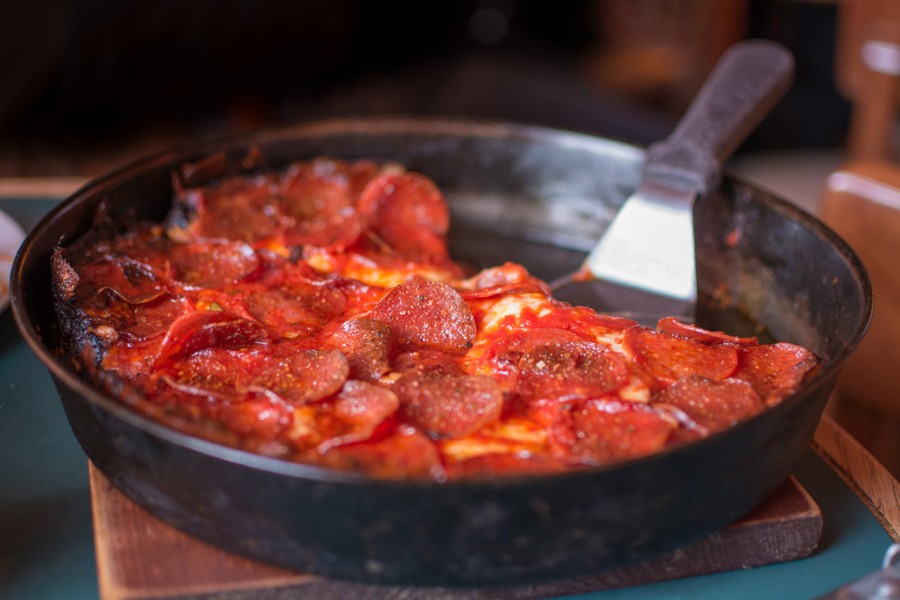 There are some decisive advantages to living in a big city over a small town, and I’d like to think the quality of food is one of them. Chicago isn’t a university-centric community, but it does have quite a few college and graduate students (over 600,000 actually) and there is no disputing its status as a food city. Sometimes the two even intertwine.

A solid restaurant for the low-budget college student is an elusive feat that few restaurateurs succeed in producing. Fortunately for us, Chicago has had several successful attempts. Unfortunately for us, UChicago students don’t always know about them.

Pequod’s Pizza at 2207 North Clybourn Avenue in Lincoln Park is one such place. Well known to students at DePaul and Loyola, it isn’t exactly the top UChicago hot spot. But the pedigree is good, and there is plenty of evidence to substantiate.

Pequod’s has been serving a collegiate audience for more than 30 years. Founded by the legendary pizza chef Burt Katz, Pequod’s has its own degree of national reputation. It’s been featured on the cover of Saveur and on an episode of Anthony Bourdain’s show No Reservations. Even still, it took me a few years before I made my first visit. The first time around I went because it was aligned with one of my classes—a survey of Melville.

So what makes Pequod’s such a collegiate pizzeria, beyond the nod to literary whaling? Two things—it cares about the food it serves, and it does so unpretentiously. The restaurant is rowdy and a bit of a dive. There are Blackhawks jerseys hanging near the bar, and it gets so loud on the weekends that you have to yell to get your order across. All of this is Pequod’s. It’s the dingy location and the roaring crowds.

It’s also the pizza; the pie deserves all the attention at Pequod’s. It’s my firm opinion that almost all Chicago pan pizzas are about the same. The difference between Gino’s East and Uno doesn’t strike me as all that significant. But then there’s Pequod’s pan pizza, which has done pretty much the impossible and made something unique out of an already highly specific food.

At Pequod’s the claim to fame is the caramelized crust. Unlike most pies that have a ring of dough surrounding the tomato sauce and cheese, the crust designed by Katz is a sweet, caramelized wall the color of black tar. Each pizza is ringed with cheese before it’s baked all the way. The black halo completely encloses the pie and extends down the pizza’s back, making flaky ends that are burnt to a crisp.

The caramelized crust is famous, but it doesn’t look like much when you first see it. In fact, even through the first few bites, there isn’t much to talk about. What you get from the initial nibbles are the fresh ingredients and the competitive taste. It’s thinner than the deep dish you’ll find downtown—you might want to call it a “medium dish” pizza—and the crust underneath the pie is nice and thick.

But the real magic comes toward the back end. Each bite becomes progressively sweeter and more blackened. The entire pizza changes before your eyes—or in this case, taste buds—taking something otherwise salty, starchy, and filling into a supercharged meld of sweet and salty flavors.

Every bite of crust is worth it. If they somehow could sell just the crust of the pie, I would probably walk around campus eating strips as midday snacks. The crust is also what leads you to take the next slice of pizza from the pan. Unfortunately, you can’t really start with the crust; it is the backbone of the pie, after all, and you do want it to stay together. That’s the downside to Pequod’s: There’s disappointment in realizing that you still have to eat the pizza, that the crust has to work with something to make its flavors sing. I took a swig of my beer to make the pain go away.

Eating at Pequod’s can be a bipolar experience your first time. Was the pizza really good, or was the crust just that amazing? What exactly did I step into? It was only a few days after my trip there that I realized I wanted to go back. I remembered the pizza, which itself stood as a solid example of Chicago-style goodness, and then the crust that blew my mind, but that was all expected. Really what I enjoyed most was the idea that every which way you look at Pequod’s, people are having a crazy fun time. There’s no other way to describe it. Even if not everyone at this North Side location is a college student—and many of them are—the cacophony of drinks and emotionally charged eating is certainly collegiate enough for me.