The Composer is Dead 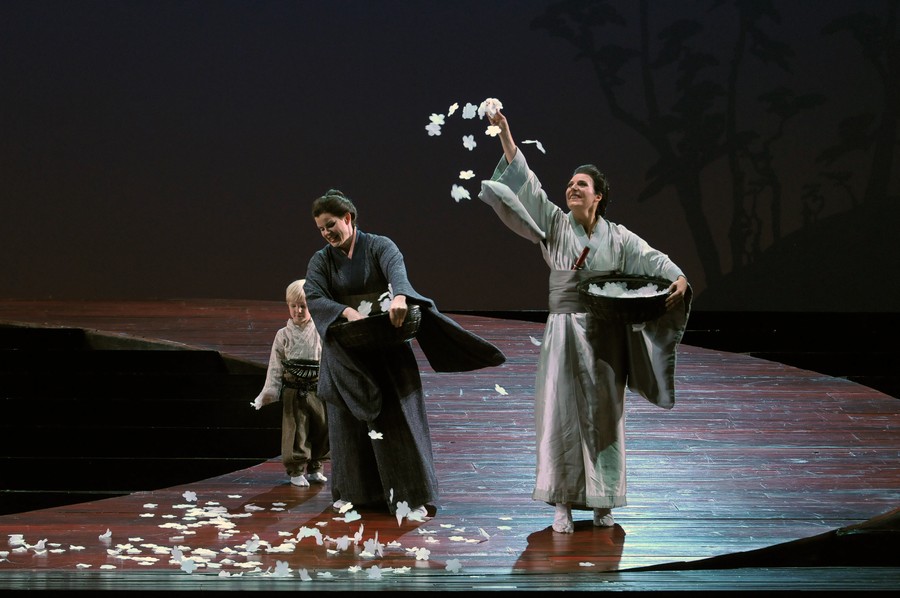 The magic of grand opera is difficult to describe. It draws the eye, charms the ear, and ensnares the heart all at once: Sight and sound combine to create a spectacle greater than the sum of its parts. I first fell under its spell when I was 14, at a Cineplex. I remember Richard Strauss’s Capriccio, broadcasting live from the Metropolitan Opera; I remember that first thrill of discovery and bliss that continues to draw me to Chicago’s Lyric Opera. And there’s been no shortage of operatic magic this season, from the charm of Il barbiere di Siviglia to the stark beauty of Rusalka. Reader, you might know something—or nothing—of what I’m talking about. But whatever you know, I know that I know a little bit more: I was recently granted a behind-the-scenes tour of the Lyric’s production process, and I now know where the magic of grand opera comes from. Shall we sneak a peek behind the velvet curtain?

The operatic story begins and ends with the production. This is the universe of the opera: sets, costumes, staging, vision, lighting, everything. I like to think of the production as a process that connects composer to audience, transforming mere notation into a tangible artistic message. There was a time when a production was two or three canvas backdrops and a few pieces of set dressing. Singers supplied their own costumes—a soprano owned a separate dress for each role in her repertoire (or doubled up if she was cheap). Modern productions have advanced enormously since then, both in complexity and expense. Price tags break the millions; see, for instance, the virtual forest of Rusalka or the lush party scenes in La traviata. They’ve become so hefty that productions now travel like Broadway shows to recoup costs; Strauss’s Capriccio comes to us next season all the way from the Met.

A fair amount of production work still happens in-house at the Lyric, from costume adjustments to prop design. This is especially true for “new Lyric productions,” or operas commissioned directly by the company. Shows have extremely long lifetimes, often revived decades after their supposed retirement. For instance, Lyric’s Ariadne auf Naxos back in 2011 was originally produced in 1998, 13 years previously. Last season’s Turandot at the Met could pass for a grad student, at 23 years old. This longevity calls for especially durable costumes that are able to handle decades of frequent use. Heavy cloth is a must-have to minimize wear and tear. Dresses are designed piecewise for adaptability and ease of replacement. Interchangeable parts make it possible to clothe singers of all shapes and sizes (believe me, they come in all shapes and sizes). Finally, a ground rule: “We never, ever use Velcro,” said one of the company tailors. “It could snap off and make a horrific noise onstage. Can you imagine, Butterfly singing ‘Un bel di’ and then RRRRRRIIIIPPPP! Disastrous.”

As for props, the Lyric has two entire storerooms (and a warehouse) full of just about anything you could imagine. There’s standard theater fare like tableware and vases and sofas, from Rococo to Art Deco, and then some really wacky stuff—giant bull-skeleton puppets, for example. And then there are the weapons. The Lyric has a warehouse chock-full of them—so full they actually call it “the armory”.

No doubt you find this arms cache to be overkill. To that I respond with the three Ls of grand opera: love, lust, and lots of stabbings. These are its Holy Trinity. Next season’s Il trovatore promises to be a bloody treat, with a body count of four dead and two traumatized. I can’t wait.

Props exist to make the universe of grand opera more believable. After all, opera exists in a universe where everyone sings everything and somehow people still can’t hear one another and rooms have only three walls, so it needs all the realism it can get. Hence the lavish productions, the high price tags of the costumes and props—everything to make the universe more immersive.

As my music teacher once told me, “Opera is an illusion.” It’s fascinating how, despite being neither real nor rational, grand opera can move so powerfully. Puccini’s Madama Butterfly is a great example of this—all of his music, really (Puccini is my weakness). I know it so well, yet it seems new to me each time I listen: The music feels as fresh and the story as poignant as it did that first day in October. The illusion is a potent one–it’s almost like magic.