Al Gore talks climate change, the role of money in politics at the IOP 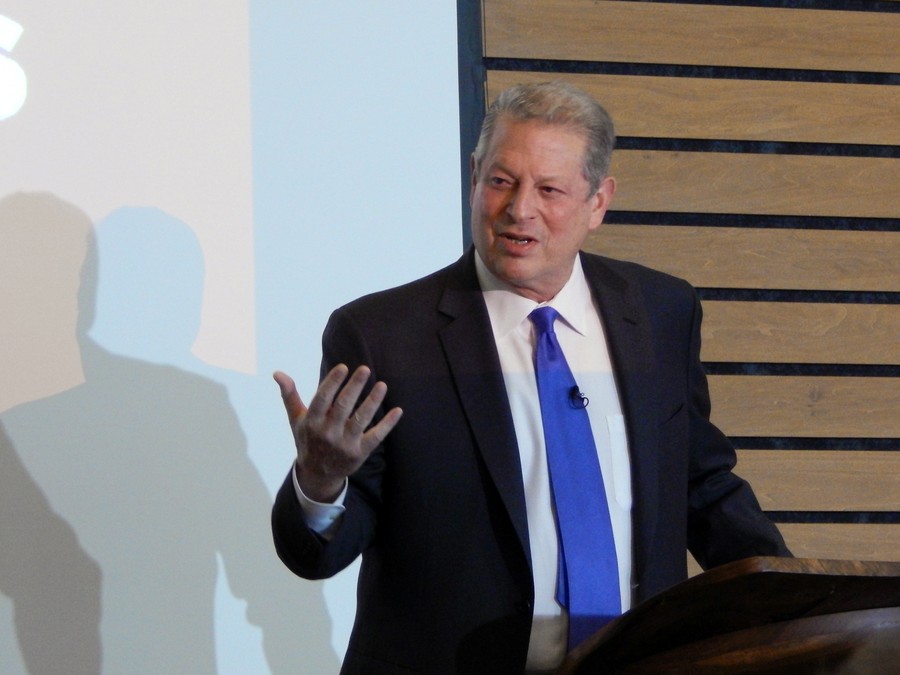 Former U.S. Vice President and environmental activist Al Gore spoke on topics ranging from Common Sense to Citizens United on Monday evening at a talk sponsored by the Institute of Politics (IOP) and hosted by the Chicago Theological Seminary.

The event took place in the Seminary chapel. The LEED (Leadership in Energy and Environmental Design) gold-certified environmentally friendly building was a fitting location for Gore’s message calling for citizens to join the fight against the money tainting politics and the fight against climate change. The event started with a speech by Gore and ended with a Q&A session led by IOP Executive Director David Axelrod (A.B. ’76), who read from preselected questions posed by people on Twitter.

With the stained glass of the chapel windows in view, at times Gore’s voice took on the tone of a preacher, warning against the perils of global warming, but more so about the consequences that may come if nothing is done to prevent it.

“If…you were somehow magically able to consult with 10,000 leading heart specialists in the world and 9,999 of them said, ‘Oh my god, you’ve got to take this medicine, change your diet, get some exercise, and make these other changes,’ but out of the 10,000 of them you found one that said, ‘Well I don’t know yet, the jury’s still out—what would you do?” Gore asked. “That is what some people are doing on climate now.”

He pointed to recent events in the weather as evidence for these findings, including Hurricane Sandy that hit the East Coast in 2012. “The waters over which [Sandy] passed were nine degrees Fahrenheit warmer than normal. That’s where the energy came from,” he said. “The single most criticized passage in [An Inconvenient Truth] was an animation about how the World Trade Center memorial site would be invaded by ocean water….But it happened with Sandy, ahead of schedule.”

Though the main focus of his talk was climate change, Gore highlighted the political climate as a roadblock to confronting change in the environmental climate. He criticized the Citizens United decision of the Supreme Court—“with whose decisions I don’t always agree,” he noted—as an “obscene” transgression against the United States’s democracy.

Gore said that money in politics can prevent ordinary people from impacting democracy as the founding fathers intended. “If Thomas Paine walked out his front door in Philadelphia today and went down to the nearest TV station…and said ‘I’ve got this 90-minute video called Common Sense, it’s going to change history, when do I go on the air?’ [he would be told] ‘You don’t go on the air,’” Gore said to laughter from the audience. “You get very wealthy people who can pay the gatekeepers  – who can pay the rent to get access to the public discourse.”

Though he listed statistics about the drastic ways in which climate change is already affecting life on Earth, Gore maintained optimism. “I don’t want to sound cynical—I’m not cynical, I’m hopeful, I think we have an opportunity to change this,” he said. “When the future is at risk to the extent we are now placing it, our politics must come to the rescue, must empower us to make intelligent, forceful decisions to protect the public interest, and we’re not doing it. I don’t want to talk to you…I want to recruit you. I want to ask you to get involved.”

Gore pointed out several solutions on the local and national level, including steps the Environmental Protection Agency is taking in its coal policy and the decision by Stanford University to divest from its investments in coal.

He encouraged young people in particular to get involved in the fight against climate change. “I hope that those experiencing [a renewed, more efficient Earth] will look back at us and ask, ‘How did you find the courage to make the changes that were necessary?’ Well, part of the answer will be young people who believe in the political system and were willing to do what’s necessary to make it work for the public interest…. Political will is, in that sense, a renewable resource.”