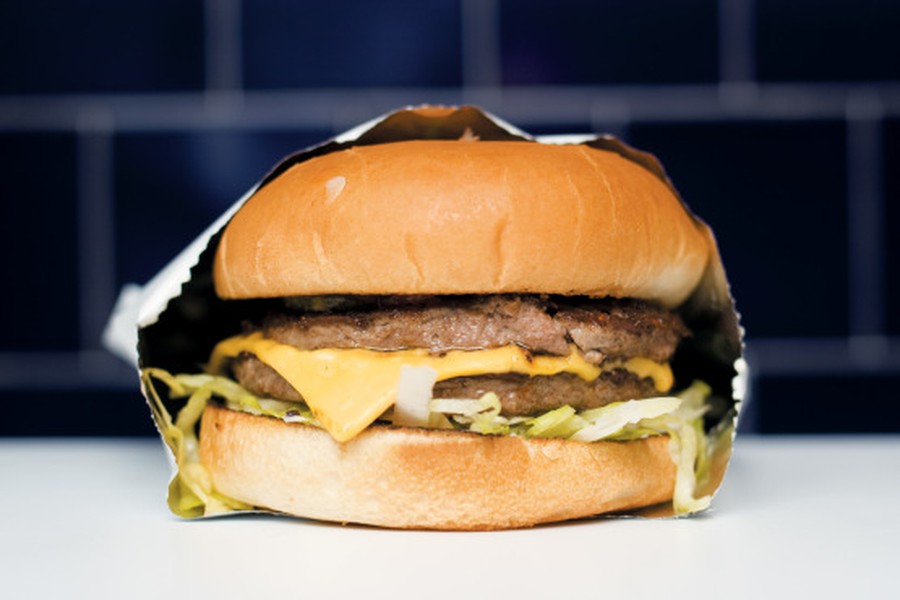 Like any self-respecting American city, Chicago has an unhealthy obsession with its burgers. There are innumerable restaurants with treasured buns to call their own, and new hierarchies evolve every two weeks or so in the elite world of burger rankings. When I look at Chicago’s burger scene, I see the food equivalent of the stock market, with foodies buying allegiance in Acadia’s upscale burger one day and doubling down on Kuma’s shady creations the next.

It’s a topsy-turvy world for the burger aficionado, where the must-try place changes so frequently. That might be why I’ve eaten at such a long list of Chicago burger joints—forty-plus and counting—and I still can’t find a stable pulse to talk about. But if making a list of top burgers is a futile enterprise, then maybe highlighting three radically divergent burgers isn’t. After all, it seems that the best part of a chaotic burger metropolis is just how crazy-different they all are. I’ll start with the classic.

A long sign juts out onto a Beverly thoroughfare with the word “Beefburger” written out vertically in large bold letters, and the words “Top Notch” written horizontally atop in narrow Comic Sans. We pass through the entrance to a sterile, beige-tinted interior that dulls the eyes and heightens the smell of beef on the grill. I didn’t really notice when we sat down at the table; I was still trying to recover from the sensory overload.

I want to say Top Notch Beefburgers serves a classic American burger, but that isn’t totally fair. Top Notch has cranked out burgers on the South Side in one form or another since 1942, which is to say, they invented the classic burger. Their beef is ground on-site, formed into patties, and thrown on the grill. You have options for raw or grilled onions, or you can upgrade to a Super King Size 3/4 pounder. There are a variety of cheeses to choose from, including cheddar and American, which is what I prefer here.

If there were a Platonic form for a cheeseburger, the idea we all think of when we think of what a cheeseburger is, it would be the beefburger. Each bite is meaty and fatty, with bold and sharp flavors layered on top of each other like, well, a burger. The burger also fills you up, to an almost absurd degree, but it’s nothing their homemade Oreo shakes won’t fix.

Pl-zeň is an underground restaurant/bar that specializes in another category of burger. Situated in a dimly lit basement of sorts, Pl-zeň specializes in fusion foods, and serves dishes like mussels with tomatillo cream sauce and black tagliatelle pasta with jalapeño pesto. But what is more memorable is the beer selection—a quirky selection on tap with alcohol contents that average nine percent and up—and their dressed-up burger.

Dressed-up burgers are the divas of the burger world, dazzling and alluring to the eye, sometimes with disappointing results. Fortunately, the taste of Pl-zeň’s burgers fits its image. A bison patty on brioche buns covered in a melted cheddar fondue forms the basis of their standard burger. A pillow of crispy onions sits atop the meat, and slices of bacon balance precariously atop the onion pile.

It looks excessive but delicate and, like a bird with colorful plumage, screams for your attention when it hits the table. The burger is surrounded by a mound of fries, which only adds to the look of decadence and excess. Fortunately, there is no explosion of salty flavors or unmanageable bites. The brioche flattens out in your hands, scrunches everything together, and produces a mild balance of tastes that plays on the gaminess of the bison. Not quite what I expected, but that’s probably a good thing.

Last June, I sat for my first standardized test since the SAT. Scared shitless, I took the bus to Michigan Avenue a few hours early and did the only thing I could think of to prepare myself. I ate at M Burger. And when it was all over, I did the only sensible thing and celebrated with more M Burger.

The original location of this fast-food burger joint is literally carved out of the kitchen space of the ultra-high-end restaurant Tru. There are only a few seats available, with most people ordering their meals to go, or eating on the benches right outside, but the fact that there are still lines for dinner is telling.

M Burger might just be a glorified Big Mac, as one friend recently lamented, but that is exactly what’s so charming about it. The burger has few frills, amounting largely to the secret sauce they add with the bacon and cheese. Their buns are particularly soft and fluffy, and the meat is tender and cooked adequately into the center. But there is an aspect of love to their recipe, of thoughtfulness to the quality of their ingredients, which makes it worth going to again. And again.

M Burger stands as a living example of how great it is to live in a city that can’t make up its mind about which beef and bun it likes best. Out of the chaos rise the little guys that stand out from the crowd and make eating 40+ burgers not just an enjoyable experience, but an unpredictable one at that.