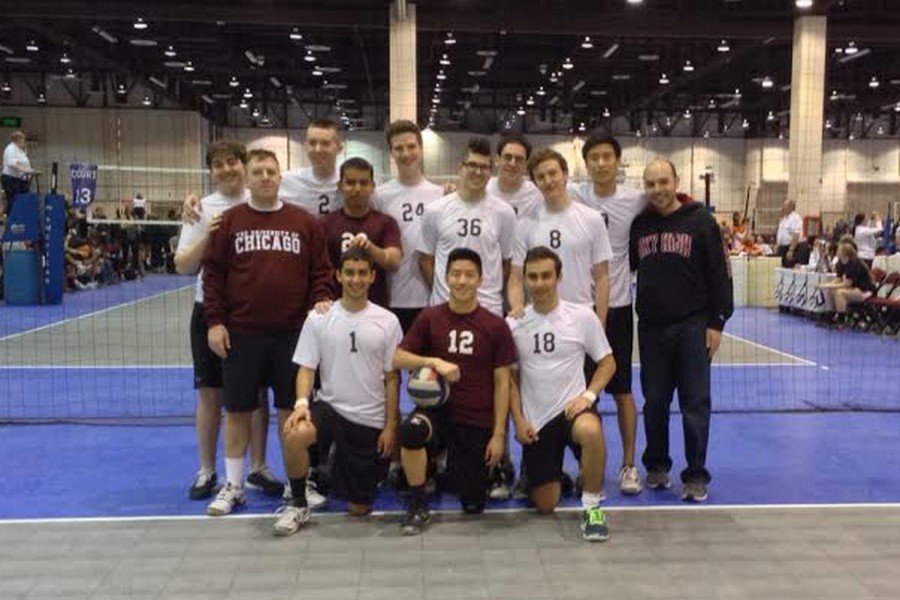 Men’s volleyball is one of UChicago’s fastest-growing club sports. In 2012, the club only had seven players on hand at the National Collegiate Club Volleyball Championships, the minimum needed to field a team. Now, it has 30 to 40 players come out to every practice, team president Thomas Schankler said.

“It’s too much to have for one court of playing,” Schankler, a fourth-year, said. “It’s a good problem to have. We’re at a much more comfortable placing in terms of looking into the future.”

The turn came two years ago, when Schankler and his teammates made a conscious effort to open the club up to newcomers. “We had a really good coach who was super intense,” Schankler said. “The methodology was like, ‘We need the best players only practicing,’ and it turned away a lot of people from the club who weren’t used to that coaching mentality.”

While that mentality worked well at times—that seven-man team finished tied for fifth at Nationals, its best performance ever—it put the club in danger of folding, so it opened its doors.

This season, with a roster full of newcomers and some untimely injuries, Nationals (April 3–5 in Reno) didn’t go quite as well—Schankler would only say they did “very poorly”—but he is optimistic about the future of the club.

“We work all year for Nationals, and we want to show it, because we definitely have the talent,” Schankler said. “A graduate student on the team said he was sad to be graduating, because he wasn’t going to see this team when they’re playing at their full potential, and they know it.”

The men’s volleyball club at UChicago has been around since at least 1994. The club was initially composed mostly of graduate students who had competed in varsity or club volleyball as undergraduates, but now most of the regular players are first- and second-years, many of whom had only played volleyball in high school P.E. and came out on a lark.

“The Monday night of O-Week, I met this random guy named Adonia, and we started talking,” said first-year player Ron Yehoshua, who went out for volleyball in middle school on his mother's urging and has stuck with it every year since then. “He said, ‘Hey, you should come out to club volleyball.’ I never would have known, so it’s very fortunate I met this guy.”

The club makes it a point to be relaxed and welcoming, both on and off the court. “The first couple of times I came to the open gyms, I was really intimidated,” Yehoshua said. “I came into college just thinking about cliques and how you can’t really be friends with the older players, and then when they started inviting me to things, I was surprised. But I went, and I had a lot of fun.”

Volleyball is one of the few American sports more popular among women than men. Only 50 of the 351 Division I colleges field varsity men’s volleyball teams; under Title IX, college athletics programs are required to fund the same number of men’s and women’s teams, and men’s volleyball often gets the axe for football, Schankler said.

In the Midwest, the West Coast, and Europe, though, men’s volleyball is wildly popular.

“If you watch men’s volleyball at the Olympics, it’s ridiculously impressive,” Schankler said. “They jump real high and hit the ball real hard—you would not want to get hit by that. It would hurt.”

Volleyball’s not just about athleticism, though; communication between teammates is paramount.

“Every play, a ball’s hit really hard between two players,” Yehoshua said. “You need to communicate to figure out who’s going to hit it. In basketball, you can have a standout guy; LeBron James can carry a team. But in volleyball, you literally need to use your whole team, because you can’t touch the ball twice.”

With Nationals three weeks in its rearview mirror, the club’s season is mostly over; it spends fall and winter practicing and participating in Midwest tournaments to prepare. Schankler said the rest of the year will serve to give new players time on the court and help more experienced players keep their skills up.

“We just want to keep building,” Yehoshua said. “As a group of guys, we have fun together and want to make sure we keep an open, fun atmosphere in the club.”