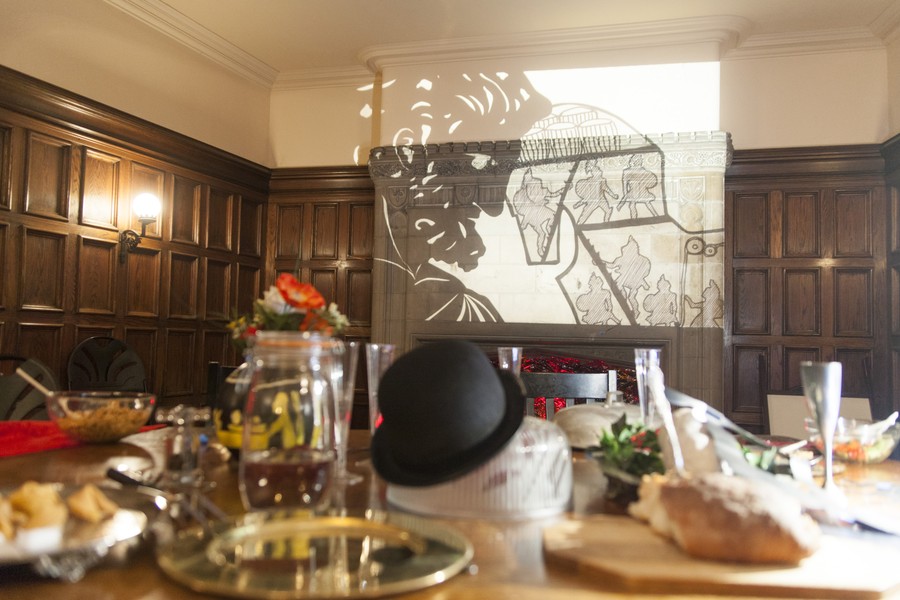 Walking into the dress rehearsal and soon-to-be main stage of Iron Bridal Feast, I found an air of excitement and mild pandemonium. The spring production for the Classical Entertainment Society (CES) is a dinner show complete with revenge cycles, bloodbaths, and puppets. Iron Bridal Feast is a new play written and adapted by fourth-year Robert Eric Shoemaker and second-year Rebecca Segall opening this weekend. Shoemaker, after the success of his musical Plath/Hughes, is fitting in one more masterpiece before he graduates this spring. He wrote Iron Bridal Feast with his good friend and co-director Segall, who will take over CES as Artistic Director next year.

The tale is set around a tragic cycle of classical violence. It traces the arc of the House of Tantalus through generations. His miserable line is seated at a dinner party in hell, summoned by the surly and self-aware chorus, including Homer, Hesiod, and Herodotus, and celebrity guests such as Agamemnon, Clytemnestra, and Orestes. Murder and intrigue ensue as their fates are told, deaths are avenged, and children are cooked. The tale of Atreus and the Trojan War is portrayed through live-action acting and shadow puppetry.

In the words of Shoemaker, “The play is inspired by classical tragedies, which, in true CES fashion, we molded together into a new adaptation using both modern and ancient themes. All in all, there’s Aeschylus, Sophocles, Euripides, Seneca, and Chuck Mee (a modern playwright who loves classical texts, and with whom I’ve been in touch). We started out wanting to adapt Thyestes by Seneca, and it grew into an amalgam of our favorite plays—we read a bunch in one night and concocted a narrative.” Shoemaker found this work to be his most avant-garde, and perhaps his own personal revenge cycle as well: It’s the piece he’s wanted to expand on the most, and the piece on which he has struggled the most as well.

If the title sounds distant from its ancient Greek origins, that’s because it is. When asked about its namesake, Segall reveals that the title was an accident. “The script has undergone so many life cycles, three or four, that the title doesn’t really directly apply anymore. I was pretty confident that a better title would come along…but Eric maintains that he needs a title first, and this was the first title on the Word document. In the end, nothing better came along.”

When asked about why CES is unique, Segall discussed the different goals and qualities that the theater troupe comprises. “I think our project as a group is to find out how to make classically-based texts relevant and interesting, and really just entertaining to a modern audience. There’s a lot in Thyestes that is universally a good thing to pay for and watch; it’s horrifying and funny.” The biggest challenge the troupe members seem to face is a language barrier: Though their productions are staged in modern English, these plays are steeped in antiquity, a fact that audiences are forced to internalize before the show even begins.

Segall says that “this is overcome by the magic of theater and creativity, especially new media. As for the TV portion, I haven’t seen that done here before. We even have a shadow puppet show, narrating the Trojan War. Whether you know about or care about the subject, it’s entertaining. That’s the spectacle of it.” In addition to using modern technology, CES goes about making old-fashioned plots accessible to their audience through brutal self-awareness and teasing anachronisms, including using Sophocles’s words in fortune cookies. She goes on to say, “It’s challenging and charming, just making it surprising, but the actual content and material really is all there.”

Another challenge CES faces regularly is the lack of conventional theater policy. “Sometimes it’s frustrating that CES doesn’t have access to traditional theater space, but at the same time I think that’s what makes our shows so unique. It forces us to use unconventional spaces, our designers have to adapt…it’s the magic of theater. Homespun is definitely our buzzword. Our motto basically is, ‘If you don’t know how to do something, we learn how.’ That’s how I learned how to stain wood, to sew, to dumpster dive…. It’s just part of our process,” Segall said.

As for other technological advances, Iron Bridal Feast boasts intense light displays that add modern flair to a play set in antiquity. Tiffany Wang, a newcomer to CES, was lighting director for the show. “I’m starting to constantly ask questions—that makes CES an interesting challenge. When you don’t have a board, you make a board. We’ve even made a dimmer. No electrocutions yet, and no electrical fires either…knock on wood.”

While asking Segall about the intended audience, I heard an accordion strikes up in the background. “Well, it’s dinner theater, it’s part of the aesthetic,” she said of the musical interlude. She was keen to spread the word that CES is quite serious about the "Feast" aspect of this production. “We’re serving food! It’s a real dinner show—it’s catered by Cedar’s, serving our ancient Mediterranean vibe. The chorus will be serving you falafel!”

Despite its lofty subject matter and involved production, ultimately the only audience requirement for Iron Bridal Feast is an openness to an enjoyable night of theater and falafel. “On the one hand, it’ll be gratifying for classicists, as we present characters from canon in a new way, but it’s really just entertaining for anybody,” she said. “You don’t really have to believe in the tension of Clytemnestra killing her husband—the jokes definitely won’t be ‘all Greek to you’.”

Iron Bridal Feast will be playing in Ida Noyes from Thursday through Saturday at 8 p.m., with a Saturday matinee at 2 p.m. Tickets are sold online and at the door, $6 for students.