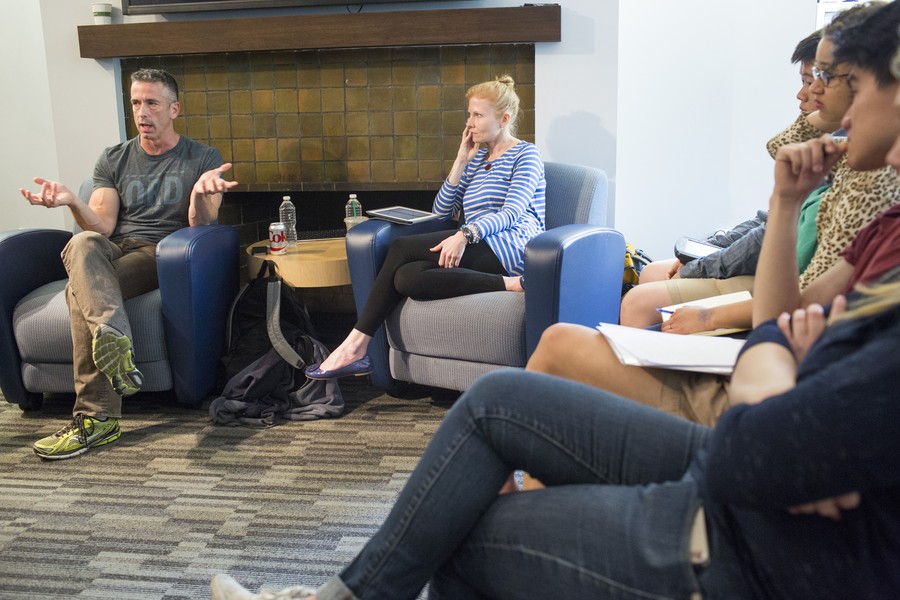 After a terse exchange about the use of a transphobic slur between a guest speaker and student at an Institute of Politics (IOP) event last week, students in the LGBTQ community have started circulating a petition calling for a formal apology from the IOP. At press time, the petition had more than 1,100 signatures.

The event was an off-the-record Fellows seminar held by Ana Marie Cox, a political columnist on U.S. politics for The Guardian. It featured Dan Savage, a relationship and sex advice columnist and founder of the It Gets Better project, as a guest speaker.

The incident occurred when, according to several sources, Savage and Cox began discussing his personal history as a gay man. According to a first-year student and member of the LGBTQ community who asked to be identified as Hex, Savage used the slur t----- as an example in an anecdote about reclaiming words. Cox then added, “I used to make jokes about t----ies,” audience members recounted.

“That was one of the most hurtful parts,” Hex said, explaining the perceived insult was that Cox used the slur to refer to the group of people she joked about. “In that context, it was like being applied to all transgender people,” it said. (“It” is Hex’s chosen pronoun.)

In a statement, the IOP said, “A guest used language that provoked a spirited debate. The speaker was discussing how hurtful words can be repurposed and used to empower; at no point did he direct any slurs at anyone.”

Hex asked Savage and Cox to use the term “T-slur” instead of the actual word. According to second-year Sara Rubinstein, an executive director of QUIP (Queers United in Power), and Hex, Savage then named other slurs, asking if they were suitable to use instead. “Obviously [he attempted] to threaten me and make me feel uncomfortable in that space, which was pretty successful,” Hex said.

A dialogue about the usage of the slur between Cox, Savage, and Hex ensued, creating a tense atmosphere in the room, according to several audience members. Hex ultimately apologized to Savage for misdirecting the conversation, but was further upset when Cox started talking about gender identification and left the room in tears. Following Hex’s exit, members of the staff and the dean on call, who had been asked to attend as a precaution due to Savage’s controversial history, quickly left to comfort it, according to Hex and a staff member.

IOP Executive Director Steve Edwards, who attended the seminar, would not provide specific details of the event, citing the off-the-record policy for Fellows seminars, but provided more context in an interview.

“Fundamentally what the conversation was about was language. One argument is that language and certain terms can be so hurtful that no matter the context, no matter the person using them, they should not be invoked, period,” he said. “The other argument was that language can be reappropriated—hurtful language can be re-appropriated by groups that are directly affected by the language—and used to empower and that there’s a tradition of that.”

Some students from QUIP had prepared questions for Savage to confront some of his past writing. Rubinstein acknowledged that she went “basically to raise criticism. It was not really things related to the slurs. It was more about philosophical differences with queer politics.”

The day after the seminar, Rubinstein, Hex, second-yearKris Rosentel, and first-year Alex DiLalla—a student who is heavily involved in the IOP and attended the event—met with Edwards and Dillan Siegler (MBA ’00), the director of partnerships and engagement at the IOP to discuss the incident and planned a follow-up meeting for Tuesday.

“We listened openly and sympathetically to the concerns about language and about the dehumanizing effects of language and expressed our desire not to be a place where dehumanizing language is used,” Edwards said. “At no time did we characterize the language from the event itself.” They also praised the students for standing up against what they perceived as an issue.

On Thursday evening after the seminar, Rubinstein and Rosentel had started drafting what would later become their petition on Change.org, calling for a formal apology from the IOP and “a commitment to preventing the use of slurs and hate speech in the future,” the petition reads. They released the petition after Rubinstein and Hex saw the IOP’s statement during Tuesday’s follow-up meeting and were disappointed, saying that the statement didn’t accurately represent what happened at the event.

The statement, authored by the IOP staff, reads in part: “By definition, views will be expressed on occasion with which some will strongly disagree or even find deeply offensive. But we cannot remain true to our mission and be in the business of filtering guests or policing their statements to ensure they will always meet with broad agreement and approval and will not offend.”

Cox, the moderator, said the IOP statement represented her views and reaffirmed her support for Savage. “I am proud to have brought Dan Savage, one of the most important gay rights activists in the past twenty years, to the University of Chicago,” she wrote in a statement. “His candidness and willingness to engage in taboo topics are among the reasons he has been able to make such a difference in so many lives.”

Despite the petition, an apology from the IOP does not appear likely. “What we are defending is the right for all of those individuals—including the other students in the room, some of whom felt very, very differently about what went on—to be able to express themselves in this forum. That’s what we’re weighing here,” Edwards said. “By not apologizing to these students, we are not at all saying that we condone or endorse the specific views.”

The students behind the petition disagree. “What I hope we can get is an acknowledgement that this happened, a commitment knowing that kids and students involved at the IOP aren’t going to have to face hate speech,” Hex said. “They’re going to know that they can feel comfortable.”

Edwards said the IOP is working with the Office of Lesbian, Gay, Bisexual, Transgender and Queer Student Life to develop future training for staff and the board.