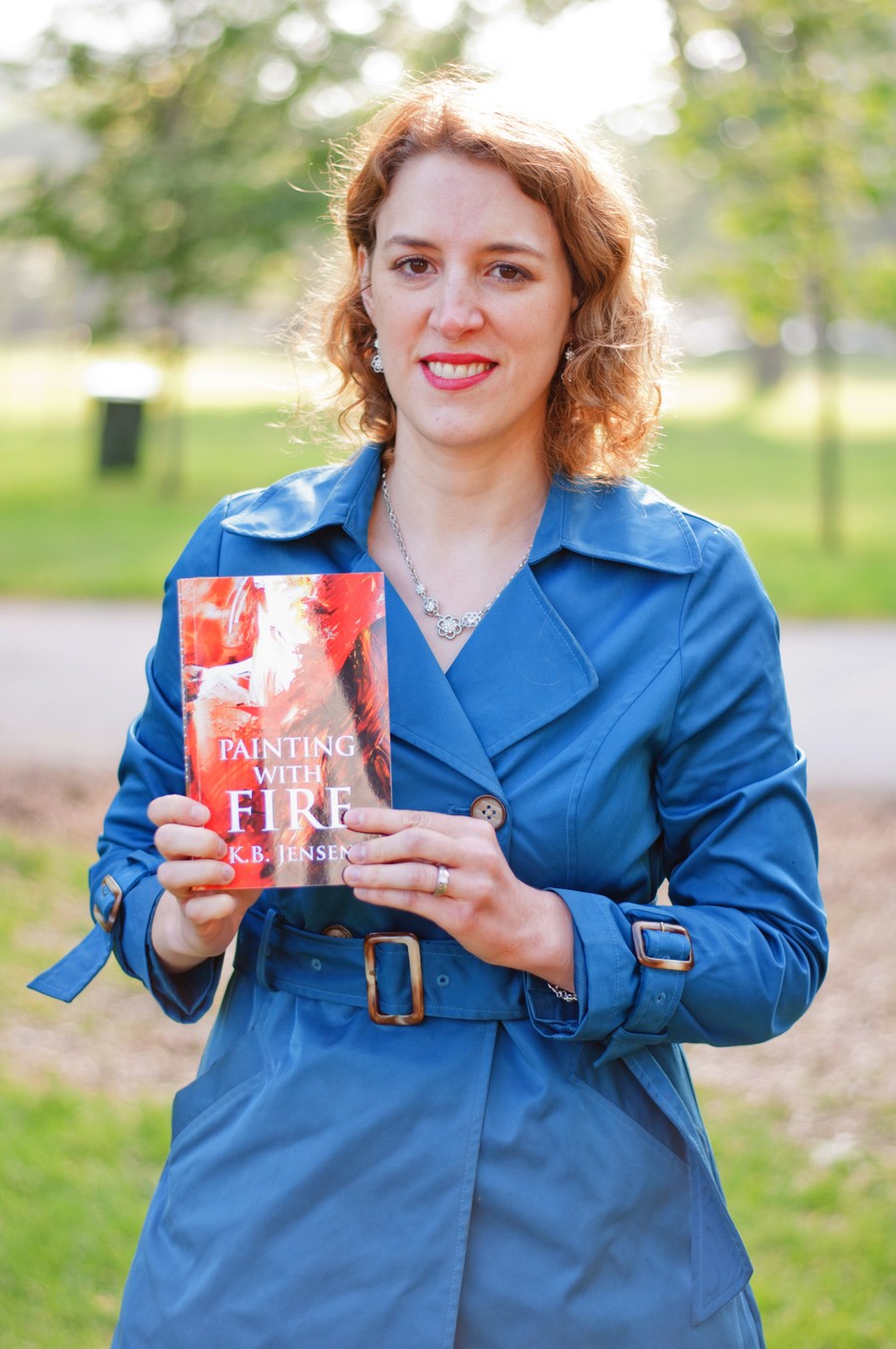 Kirsten Jensen is a freelance writer and Hyde Park resident who recently published her debut novel, a murder mystery called Painting With Fire that takes place in an alternate version of Hyde Park, Chicago. Prior to her freelance writing career, Jensen was a journalist at The Times of Northwest Indiana. She sat down to talk with the Maroon about her novel, Hyde Park, and her experiences in self-publishing.

Chicago Maroon: Can you give us some background on the plot of your story?

Kirsten Jensen: It’s a gritty urban mystery. Basically, it’s Claudia and Tom. They live in this three-story walk-up on the South Side of Chicago. One day they discover a body outside their front door and it changes their lives, basically. Claudia becomes very suspicious of their roommate. He’s an artist, he doesn’t talk about his past…he’s kind of moody. [Laugh] Fun character. So she starts to wonder what he wasn’t telling her—or isn’t telling her—and basically can’t let it go. She becomes very obsessed with the murder and she has a little too much time on her hands since she’s unemployed. She starts asking her neighbors what’s going on, so that’s pretty much the start of it. I don’t want to give away too much. It’s hard to talk about a mystery because there [are] twists and turns and you don’t want to reveal [it] all.

CM: So your story takes place in Hyde Park. Can you talk a little more about the setting?

KJ: I say yes and no [to the idea that] it takes place in Hyde Park. The reason I say yes and no is because I want people to be able to distinguish between fiction and reality. I don’t want to cast our neighborhood in a negative way, and the setting of a murder mystery is going to be a dark and dangerous place. So it’s kind of funny: When I picture these characters walking down the street, I picture them in Hyde Park. But at the same time I realize that this isn’t Hyde Park, and we don’t have the body count that a murder mystery novel setting has, and we shouldn’t have the body count that a murder mystery novel setting has. It’s important to distinguish that while it’s inspired by our neighborhood and it certainly has the vibe of our neighborhood, it’s not actually our neighborhood. Our neighborhood is not this dark terrible place where people are found dead on the corner all the time. This is an awesome vibrant community. I definitely take…for example the church of 57th and Blackstone set fire to my imagination…I take liberties. It’s a different kind of neighborhood surrounding the church, but it’s recognizable.

CM: How did you decide to set your story in Hyde Park as opposed to a fictional neighborhood or somewhere else in Chicago?

KJ: I didn’t really consciously make the decision. I think it’s a funny thing when you’re drawing inspiration from a novel…it just comes to you, just subconsciously filters in, the things around you and the things you experience filter in, so it wasn’t necessary a conscious decision…. It’s more like H.P. inspired me while I was writing it.

CM: What was it like writing your first novel, and why mystery?

KJ: If I had known how much work it was to write a mystery novel in the beginning, I probably would have just quit because [laugh] I did not consciously decide to write a mystery. I actually started out writing a poem about the radiators in my apartment; it’s in Chapter One, and it morphed into a short story and that morphed into a bigger story and it just kept going and going. It was like arranging a puzzle, definitely bringing all these different puzzle pieces together; it’s very complex. Writing a murder mystery for a first novel is definitely a challenge, but it was fun. It took me about four years to do it; it was not an easy task.

CM: What about your main character, Claudia? Did you base her off of yourself at all?

KJ: She’s a new character; obviously you draw from yourself in some ways. She’s very paranoid. She really takes it to heart when she discovers this body. She actually touches the man; she reaches down and touches his hand. She really is a sensitive person and doesn’t want to let it go, and is very stubborn about that. Everyone else has sort of forgotten as the months go by, but she just keeps questioning it. She’s that kind of a person.

CM: What’s the time span for this story?

KJ: It takes place over a few seasons. I think it starts in the wintertime and ends the next fall. I did that on purpose. I tried not to write the formulaic mystery novel where it’s all wrapped up in a snap. I wanted it to be more authentic in that it takes time, especially in Cook County, for a murder to be resolved.

CM: So you worked as a journalist, and now you’re a freelance writer. What was it like to switch from writing journalistic reports to writing a novel?

KJ: It was actually kind of challenging in that I had to stop being so hung up on the truth. Sometimes you have to take liberties to tell the story…. I had to let go of the truth and suspend that a little bit. I had to be like, “Well, maybe not everything is realistic because it can’t always be realistic.” But I really wanted to have an element of realism in the story, even in a fictional work.

CM: Do you think your experience as a journalist helped you or influenced you in the writing process?

KJ: My time as a newspaper reporter definitely influenced my writing of the book. The way that people talk and the way that people react to the tragedy are definitely realistic. If you look at Chapter Two, it says, “So the family gathers outside where the body was found…. Outside the children tied paper hearts on the bushes with the words ‘Goodbye, Uncle Steve. We’ll miss you, rest in peace’…. One of the paper hearts had already been ripped apart by the winter wind. That’s the kind of stuff I would see as a reporter. I would go to the scene and I would talk to people and I would see the ways that they paid tribute to the people they’d lost and I’d sympathize [with] them and feel a little bit of what they were feeling—not as much, obviously. Little things like that are sprinkled in the book.

CM: Do you plan on writing more in the same universe?

KJ: Right now I’m working on my second book. It’s a collection of short stories. It’s not a mystery but there are definitely elements…. Well, I don’t want to go into that too much. I haven’t ruled out writing another mystery; a lot of people have been pestering me to write a sequel, and I’m trying to think about it very carefully. I may actually try to write a prequel because I feel like there’s a lot of stuff about Tom, the artist, that I don’t reveal yet about this book that might be intriguing for another book. I probably—hopefully—will write another mystery because it’s a fun genre to write.

CM: Can you talk a bit about the publishing process you went through?

KJ: Basically, there’s kind of a revolution going on in the publishing industry right now. Indie publishing is really taking off and I went…I don’t need an agent. [It takes] years to get an agent. You go to an agent, they’ll have 10,000 queries a year, and they’ll accept maybe one of those queries, and when you start playing the odds, you start thinking, “Is that really a good use of my time?” I could just self-publish and then have time to write my next book, and I get to keep a lot more of the royalties. So it made a lot more sense for me to do it on my own. And plus, it gave me a lot of freedom. I don’t have to write the formulaic mystery novel or the detective series and promise them 10 more books that are exactly the same. I can write what I want to write and I can oversee the editing and oversee the cover design. I actually started up my own publishing company, Crimson Clad LLC, to do it. I don’t know if I’ll publish other titles in the future, we’ll see.

CM: Where does the cover art come from?

KJ: Moscow. I had a design contest on 99 Designs, which is awesome, and I had 279 design entries from all over the world. People submitted their cover ideas and a lot of them were illegal stock images [laugh] but I had some really brilliant ones. It was a really hard process to whittle it down and give feedback. It’s a self-portrait of the designer, actually. She goes by Zoe Shturm.

CM: What does making your own publishing company entail?

CM: How did you go about marketing?

KJ: There are definitely some promotional tools that Kindle direct publishing has. Like, they have five free days where you can give away your book for free for five days if you’re exclusive with Amazon for the first three months. I did that and gave away a lot of books, which was a big part of my marketing platform: being active on social media, obviously talking to reporters. Just spreading the word. I’m a very modest person so I have trouble [doing] self-promotion. It’s important to get the word out, because what’s the point of creating art if you don’t share it with anybody?

CM: How has the reception been so far in Hyde Park and elsewhere?

KJ: It’s been pretty positive. I’ve gotten a lot of good reviews on Amazon and it’s been really fun being able to share [my] daydreams with other people. I don’t usually get to do that, put them inside my crazy little world of imagination and see what they think.