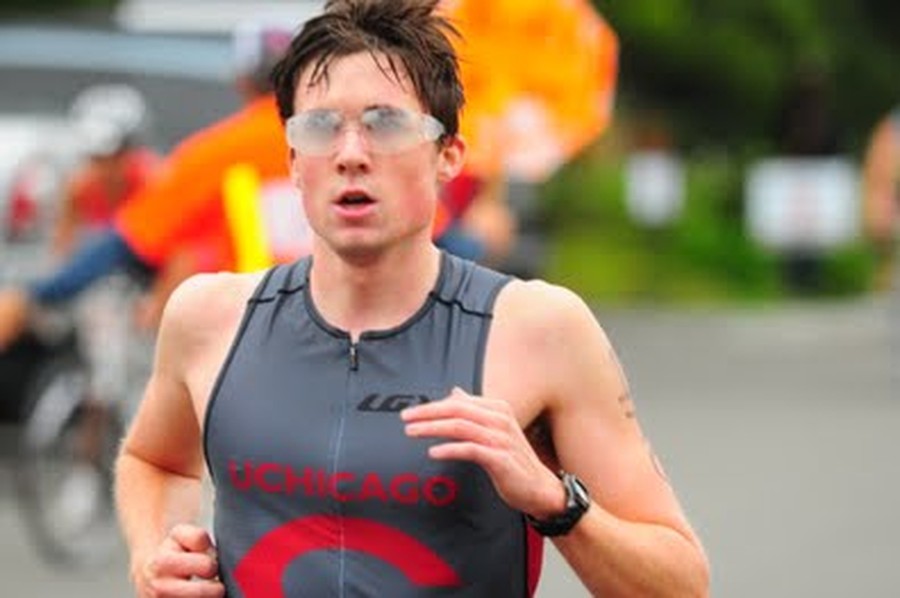 Courtesy of the UChicago Triathlon Club

Every April, a few of the nation’s most “athletic” colleges gather in Tempe, Arizona, for the USA Triathlon Collegiate National Championship, schools such as Colorado, UCLA, Navy, and Air Force. And, starting this year, UChicago.

Fourth-year Alex Murray resurrected the Triathlon Club at UChicago in 2012, after a previous iteration headed by Booth students disbanded in 2010. Murray, who swam in high school, built the club from what he said was originally mostly a loose group that met for swim practices to a dedicated core of 15 athletes, male and female, who train together almost every day.

“I had looked into the Midwest Triathlon Conference, and that seemed like a pretty solid network of schools competing together,” Murray said. “I wanted the university to be a part of that and have more of a team atmosphere for people to compete and come together.”

In the collegiate triathlon circuit, athletes compete in Olympic triathlons: a one-mile swim, 25-mile bike ride, and 6.2-mile run. The diversity is part of the appeal, said club president Kevin O’Connor, a second-year. “I can decide if I feel like biking today, or if I feel like swimming.” And on race day, “You can have a terrible day in the water, say, and make up for it with an awesome day on the bike,” he said.

As with marathons, just finishing a triathlon is something of a feat.

“Towards the end, you’ve been on the move for an hour and a half, two hours,” O’Connor said. “You’re just digging as deep as you can to finish strong, even though your body’s telling you you need to stop.”

There’s no skill prerequisite to compete; according to Murray, it just takes guts. Team members come from all sorts of backgrounds—runners, bikers, and high-school swimmers. The team doesn’t have a coach, so athletes chip in with advice in their areas of expertise. Several members of the triathlon club joined having never completed a triathlon. Once they’re veterans, though, the goal is improvement.

“It’s hard to gauge performance in a triathlon because every course is different,” said O’Connor. “But at Nationals, all five of us had PRs [personal records]. That’s really what we’re looking for, everyone to go out there and give it their all, and show that all the work over the winter is paying off.”

Chicago isn’t the best place for triathlon training, but the club makes do. They meet for two swim practices a week in Ratner, a Thursday track workout, and a Saturday long run. Biking happens sporadically, said O’Connor, on one of Hyde Park’s handful of bike trails or on the exercise bikes in Crown or Ratner.

Triathlons may be individual competitions, but having training partners is important, said O’Connor, whose mother is a triathlete. “It’s so easy, if you’re out on an hour run by yourself, to say ‘I’m going to take it easy for a while.’ But when you have other people who aren’t thinking that, that never comes to mind.”

The club suffers through training together, but they also make it a point to refuel together. The team has a tradition of eating at Valois after long runs, and one weekend, the team ran a 7.5-mile loop to the Taco Bell on 79th and Stony Island to treat themselves to Waffle Tacos.

“The breakfasts at Valois were a foundation for our team growth,” said Murray.

This academic year is the first year the triathlon club has been an official sports club, meaning they get subsidies from the University to help them travel, pay registration fees, and acquire equipment like exercise bikes and uniforms. The team qualified for Nationals by participating in a Midwest race; Murray called representing the University at Nationals “the peak of the club’s existence so far.”

“It’s a source of pride,” said Murray. “We’re out racing, people know who we are. At the Nationals in Arizona, people were like, oh, UChicago has a triathlon team! Yes, we do.”