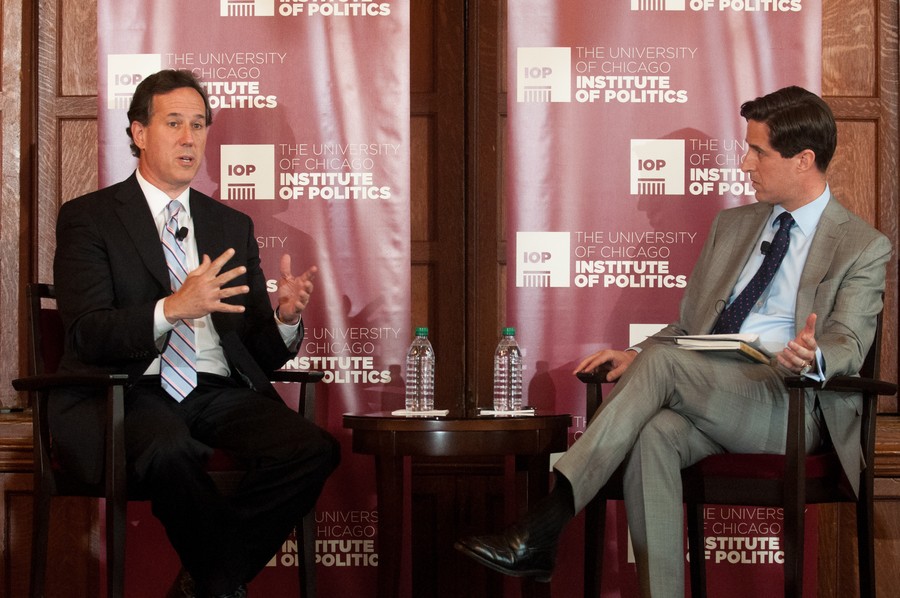 Rick Santorum, former U.S. Senator and 2012 Republican presidential candidate, discussed the state of the Republican Party and the minimum wage in a talk at the Quadrangle Club on Wednesday afternoon, hosted by the University of Chicago Institute of Politics. Santorum also attacked the Supreme Court for infringing on public debate and defended his conservative positions on gay marriage in response to student questions.

Santorum said that he believes the Republican Party needs to broaden its base to be more inclusive of lower and working classes. Republicans, he said, talk too much about macroeconomics and not enough about people. “Republicans tend to talk big picture, economic. It’s not an effective tool for communication,” he said. “So we have to orient ourselves differently to connect to the individuals, large groups of people, who are really falling behind. I’m for pro-growth economics, but we need pro-growth, pro-worker economics.”

One of Santorum’s propositions involves bringing more manufacturing jobs to the United States. Regarding jobs and education, he proposed implementing training programs for non-academic careers, as approximately 70 percent of Americans do not have a college degree.

“Not everyone should be on an academic track,” Santorum said. “There are a lot of great jobs out there that don’t require a college education. That’s not to say people shouldn’t aspire to college, but there are tremendous opportunities not going that route, and we have to honor people not going that route.”

Santorum said that America’s success lies in the idea that Americans can voice their opinions publicly, and criticized the Supreme Court for cutting down this public debate. “A lot of the division in this country is from the fact that we are less and less having these big discussions about important issues in a public forum. They’re now being taken out and said, ‘No, you can’t believe this anymore because this is the law, and no, we’re not going to allow you to debate this in a legislative form,’” he said.

He stressed the importance of family and affirmed his belief that children deserve both a mother and a father. “Bringing men and women together overall is the best situation and one that society should encourage,” Santorum said. He added that people with opposing beliefs could initiate discussion in the public forum.

In response to an audience question regarding same-sex marriage, Santorum emphasized his Catholic background and said, “Religion has every right to come into the public square with any moral issue.”

As to whether he will run for president again in 2016, he said he was considering it and that there are many different factors influencing his decision: “First and foremost, family.”