South Siders on Obama library: "bring it on home" 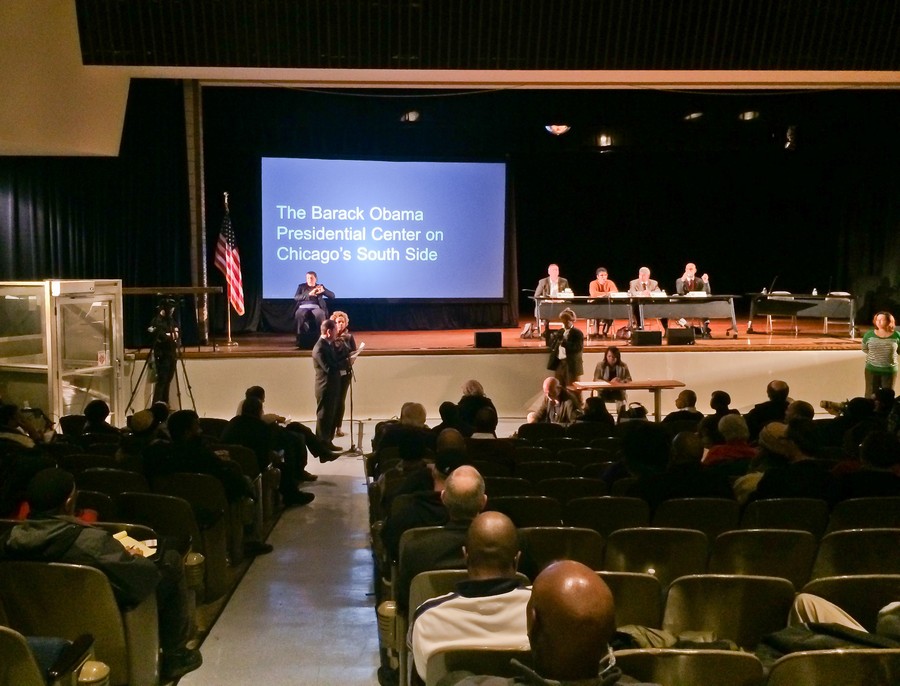 Community members packed into two fiery meetings on Tuesday and Wednesday to discuss the potential construction of the Obama Presidential Library on park land. The meetings, hosted by the Chicago Park District, were each attended by hundreds of people from the University, the advisory board, and community members from across the South Side.

Last month the Barack Obama Foundation expressed concern that neither the University nor the City of Chicago owns the land proposed by the University for the library in Washington Park and Jackson Park. In response, the Park District has begun considering the transfer of the proposed sites to the City, which would then make the land available to the foundation if the South Side were to be selected to the library.

The Chicago Park District is a special jurisdictional district with its own institutional powers and authority, separate from the City’s authority. The University and the City are concerned that if the park land is not brought under City control as the foundation seems to desire, the University of Chicago’s bid will not be successful. Columbia University, whom many consider the University’s chief rival for the library, owns all of the land it has proposed as the site for its library.

At Wednesday’s meeting, Avis LaVelle, vice president of the Chicago Park District Board of Commissioners, said that the issue of transferring the land would “potentially come before the board” and that the board would not immediately take action on the matter. She did add, though, that she hoped City leaders could “help tilt the decision in favor of Chicago.” However, she did not specify if the board would decide before late March, when the foundation is expected to announce its final decision.

Derek Douglas, the University’s Vice President for Civic Engagement, said in a prepared statement that community feedback led the University to selecting the two sites. “Community members told us the Presidential Center should go where it can bring the most economic benefit. That led us away from University-owned property in Hyde Park,” he said. “We also heard from the community that it was important that current residents not be displaced by the library and that they should benefit from it. While there are vacant lots in Woodlawn and Washington Park, there is not a sufficient parcel of contiguous land for the Presidential Center campus.”

However, several attendees said that there were ways to bring the library to the South Side without using public park land. “These parks were designed by one of the most visionary landscape architects, Frederick Law Olmsted,” Friends of the Park chair Lauren Moltz said. “They’re neither the City of Chicago’s, the Chicago Park District’s, or the University of Chicago’s to carve up and hand it away.”

Friends of the Park and other groups opposed to using park land prefer that the library be constructed on the 11 acres of vacant land that the University currently owns at East 55th Street and King Drive, just west of Washington Park. They questioned whether the proposed 20–25 acres of land are necessary. Most presidential libraries have used up to 50 acres of land, but the buildings typically take up only around three acres.

Other community members raised concerns about the University’s role in the planning process and said the proposed land transfer amounted to a University land grab.

“Why would you want to give the first black president’s presidential library to an institution that has not at all shown any concern, care, or priority for your lives?” Fearless Leading by the Youth (FLY) member Veronica Morris-Moore said.

Mayoral candidates Chuy García and Bob Fioretti both spoke at Tuesday’s meeting and expressed their opposition to the use of park land for the library. “The people of Chicago are rightly opposed to encroachment on their public park lands. Yet the Mayor wants to allow a private institution to confiscate land they do not own: people’s land,” García said. “The parks belong to all of us, and I stand with the growing public campaign to keep it that way.”

Some attendees pointed out that other museums and cultural institutions in Chicago are located on or near parks, such as the nearby Museum of Science of Industry. Many felt that building the library does not mean making a choice between parks and the wellbeing of the community.

“I don’t want to fight. I want to win. Bring it on home,” said Carol Adams, former president of the DuSable Museum of African American History and member of the University’s Obama library community advisory board.

Meanwhile, city officials are determined to strengthen the case for making Chicago the home of the library.

“I want this to be an easy decision for President Obama and the first lady,” Mayor Rahm Emanuel told reporters on Tuesday. “I don’t want to look back after the decision and say, ‘Well, you should have done something,’ when it’s all within our power to actually make it easy for the president to pick Chicago and pick whatever location he decides, because of the tremendous opportunity this will have for the city of Chicago.”

Attendees of Wednesday’s meeting seemed indignant that New York City was even in the running, given Obama’s political roots in Chicago. KLEO Community Life Center director Torrey Barrett called it a “slap in the face” should Obama choose Columbia University’s proposal.