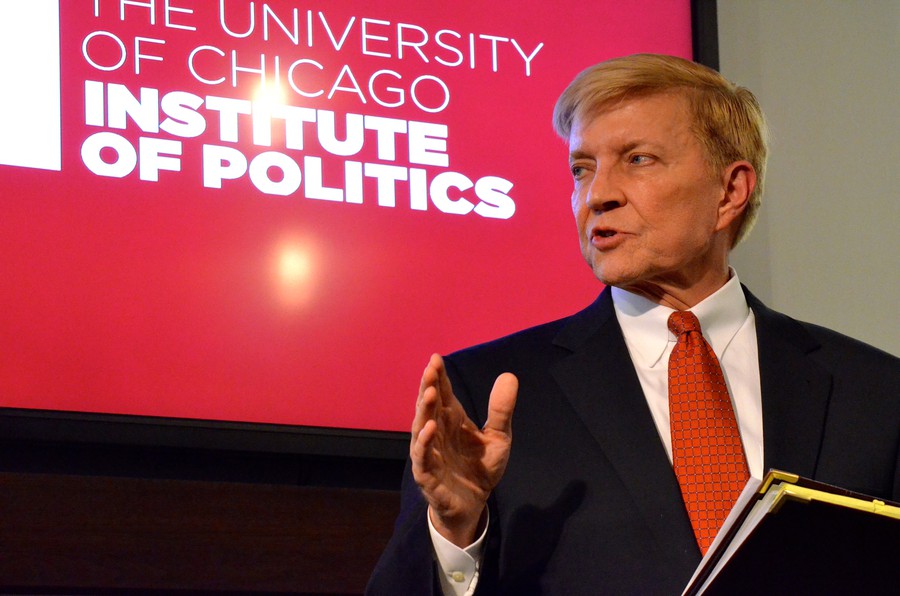 As the Chicago mayoral race gets underway, North Side alderman Bob Fioretti brought the campaign trail to the Institute of Politics on Monday evening.

Fioretti, a native Chicagoan who has been an outspoken critic of previous Chicago mayor Richard M. Daley and incumbent Rahm Emanuel, has represented the 2nd Ward of Chicago—which includes parts of Wicker Park, Old Town, and Lincoln Park—since 2007. He ran for mayor against Emanuel in 2011 before dropping out of the race to battle tonsil cancer. After being declared cancer-free last October, Fioretti is once again a candidate.

“This city [is] headed in the wrong direction,” he said, explaining his motivations to run. “On all counts, I said we can do better.”

Fioretti began by describing his South Side roots, coming from a home with an Italian immigrant father and a mother who spoke seven languages, translating letters for their neighbors. He eventually became a lawyer, working to overturn wrongful convictions in Chicago before joining the City Council.

“I learned that politics in Chicago is not a spectator sport—everybody gets involved and engaged,” he said.

Chicago’s fiscal issues are one of the three main problems in the city today, he said, in addition to crime and education reform. He said a property tax increase, which has been used in the past to financially support the Chicago Public Schools, is “off the table”—but suggested that the city should ask the state of Illinois, which is also strapped for cash, to help fund the CPS system.

Fioretti explained how the city is also severely challenged by the lack of opportunities in certain neighborhoods. “We cannot divorce poverty from violence, from a lack of education, from a lack of hope,” he said. He wants the city to become more business-friendly, encouraging investment in lower-income neighborhoods through tax-free zones.

At the same time, Fioretti advocates for increasing taxes on corporations and closing loopholes that cost the city millions of dollars. He described how the airport commissioner told him that the reason Chicago funds part of the Gary/Chicago International Airport in northwest Indiana is because that partnership allows Boeing, a corporation the city lured to Chicago several years ago, to store some of their corporate jets there.

Fioretti also noted his plan to introduce a commuter tax, adding a 1% increase to the federal tax rate on the paychecks of people who work in Chicago but live outside the city. “If they don’t like it, they can move here,” he said.

To address recent events regarding racial profiling and tension between police departments and residents across the country, Fioretti touched on the importance of hiring police officers from communities across Chicago, so they understand the intricacies of the issues facing the areas in which they work.

“Police officers can make mistakes.” One way to confront this issue, he added, is to encourage kids’ interest in the Chicago Police Department and public service through summer mentoring programs.

The alderman is running against two other well-known Democrats in the February 2015 election—Emanuel and Cook County Commissioner Jesús “Chuy” Garcíåa, who has been endorsed by several unions including the powerful Chicago Teachers’ Union, already.