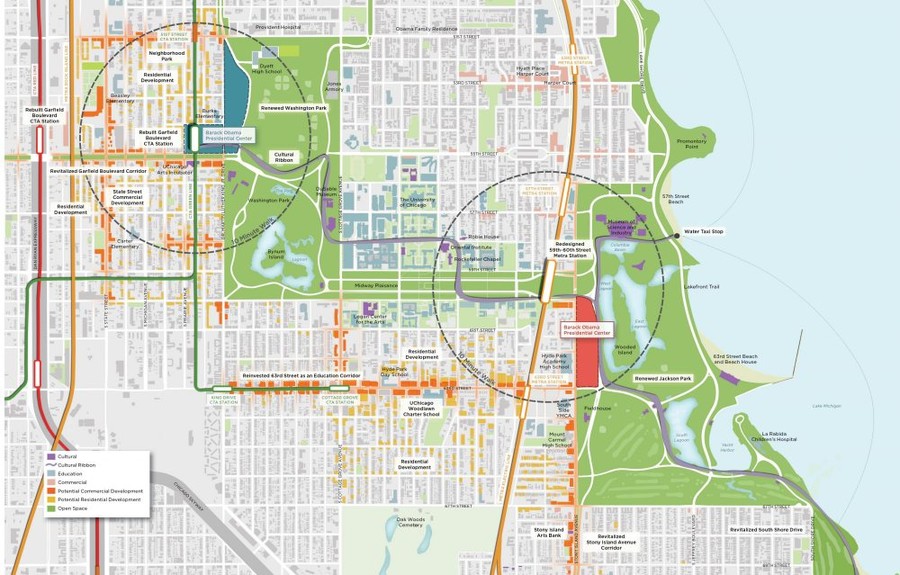 After the Barack Obama Foundation expressed concern with UChicago’s Obama Library proposal, the University has mobilized the support of the mayor, several local aldermen, and numerous community groups to try to save its bid. The University on Tuesday disclosed the location of its proposed sites for the first time in the start of a public process to secure the land it hopes to be the site of the library.

The University had proposed three different sites as potential locations for the library: Washington Park, Jackson Park, and an area close to the South Shore Cultural Center. Neither the University nor the city of Chicago owns the land on any of these sites—a major concern of the Barack Obama Foundation, the organization charged with planning the logistics of the library, according to comments recently made public.

The South Shore Cultural Center is now off the table due to controversies over its lakefront location. Mayor Rahm Emanuel announced on Monday that he would begin the process of transferring control of the two other sites from the Chicago Park District to the City of Chicago.

A spokesperson for the Chicago Park District declined a request for comment. The Park District will be holding two community meetings next week to solicit community feedback.

University spokesperson Jeremy Manier said that the University could not use land it currently owns in Hyde Park and Washington Park because none of it is large enough to accommodate a presidential library.

“If you look at the last three presidential libraries, the total land is 50 acres on average,” he said. “The conclusion we came to after a long process of talking to people in the community, the city, city agencies, and the Foundation gave feedback in various ways throughout the process, was that parks offered—in these areas, in this part of the South Side—the best chance of having a site that was right for the library and would benefit these neighborhoods.”

The University, city officials, and community members also wanted to ensure that any library site would not displace South Side residents, making park land a viable option.

Louise McCurry, president of the Jackson Park Advisory Council, said she supports the University’s proposed sites due to their accessibility and relatively minimal impact on the community.

The Washington Park site sits on the western edge of the park. The 22 acres of parkland would be combined with 10 acres of land on King Drive already owned by the University. The Jackson Park site covers about 21 acres.

A source involved with the University’s bid said the University was aware that the use of parkland might draw community anger. He cited in particular a track in Jackson Park gifted by the Chicago Bears that might have to be removed.

“They were saying that if we did this parkland we would have to remove this track, which might be a problem—the [site] in Jackson Park. Or if they did the [site] in Washington Park there was a lot of trees in the area that they would have to clear that would make people angry.”

According to Manier, the University was aware that the use of parkland would draw community backlash but expected that its commitment to creating as much as or more parkland than the library would use would assuage opposition.

Manier reiterated that the library bid has the backing of the community.

“The community members that we’ve worked with are overwhelmingly supportive of bringing the library to the South Side, and they continue to be,” he said. “There has been a competitive process, and there have been a lot of ideas that came through that. We had a lot of different sites that we looked at, at the beginning, and narrowed that in light of feedback. We think these are the best sites. A lot of folks on the South Side agree, and we see overwhelming support, still, for bringing the library here.”

On Thursday, all four aldermen representing the land covered by the two sites signed a letter in support of the University’s South Side bid, in which they emphasized the importance of “establishing appropriate governance over the land.”

In addition, nearly 40 community leaders, including members of the University’s Obama library community advisory board, penned a separate letter expressing similar support and pointing out the potential economic impact of the library. An economic study commissioned by the University found that the library would create 1,900 permanent jobs.