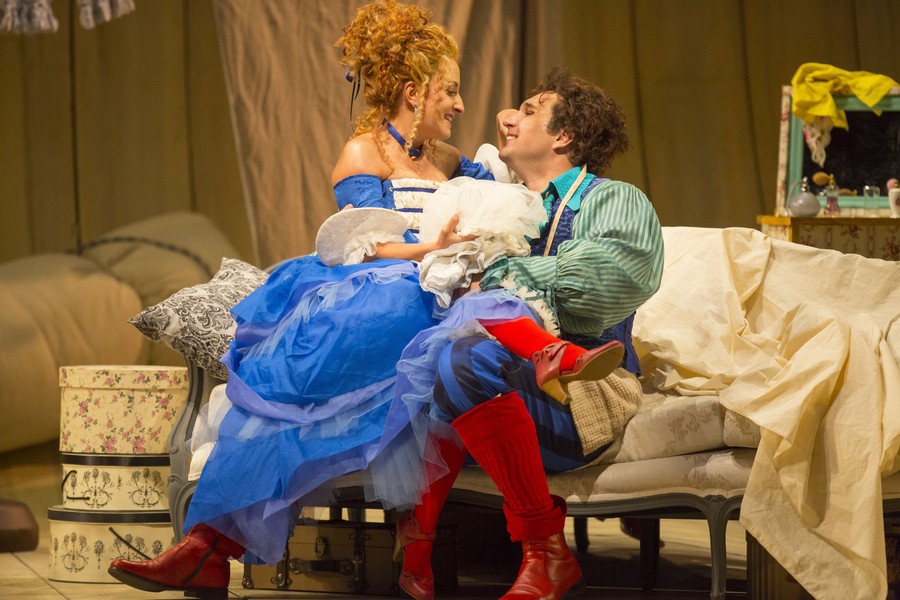 “This is not a stylized production.” So claims director Barbara Gaines in the program notes of her gaudy, tasteless excuse for Mozart’s Le nozze di Figaro, which opened Lyric Opera of Chicago’s 61st season this past Saturday. Thank God the music’s good.

Based on the Beaumarchais play of the same name, Mozart’s Figaro is a comic opera in four acts. Figaro, a valet, plans to marry the maid Susanna. But his master, Count Almaviva—who is chronically unfaithful to his wife, the Countess—has more carnal designs for the bride. A chaotic farce ensues, packed with wit and profound humanity.

Figaro was the first opera I ever saw, a ’95 Met broadcast on YouTube. I fell in love with the music through my 10-cent speakers: Nothing else I had heard sounded so natural yet so sublime. Though it’s tempting to dismiss the opera’s plot and words as banal, Figaro’s true magic happens when performer and director successfully unify music and text. Consider the Act I trio “Cosa sento!,” in which the philandering Count and his go-fer find a pageboy hidden under Susanna’s petticoat. Despite the absurdity of the scene, the pageboy’s arias offer poignant moments of introspection and vulnerability. In scenes like this, Mozart confronts us with a spectacle of humanity through words and music, which speak to us in synergistic unity. Figaro’s most powerful moment arrives at the Act IV finale, where the Count asks his wife to forgive his infidelity. The line is powerfully simple, arching submissively upwards. Its emotional content builds on and contrasts the chaos that saturates the rest of the opera: A single word, “Perdono,” offers peace and reconciliation.

Director Gaines agrees that Figaro is “a feast of joy, love, harmony, and grace.” If such a feast took place last Saturday, it was lost under the affectation and irrelevance presented onstage. I witnessed librettist Lorenzo da Ponte’s text desecrated as projected surtitles mistranslated the libretto for cheap laughs. All wit and nuance was lost: What Mozart composed as an ironic catfight between Susanna and Marcellina in Act I (“Via resti servita”) devolved to a trite exchange of “Bimbo!” and “Bitch!” More significantly, the Countess’s soul-searching “Dove sono” shriveled to a handful of platitudes: “I must be strong./ I’ll show him that love conquers all./ Someday he’ll come back to me.” To reduce the text to its barest meaning insults both the work and patronizes the audience. Are we so incapable of critical engagement that Mozart needs be fed to us like infant formula?

Not that the onstage juvenilia helped what little integrity the production had. God forbid the work speak for itself: It needs gratuitous slapstick lest nobody knows it’s funny! God forbid Figaro stay still! How can anyone get that it’s dramatic unless we overact everything?

I’m sorry—“this is not a stylized production”?

Forget that the set looks like the biggest ramp at an indoor skate park dressed with junk from Pier 1 Imports. Forget that Susanna looks like Smurfette playing the prostitute from Les Misérables. Forget that Basilio is, inexplicably, gayer than West Hollywood and resembles an extra from SNL’s The Californians. Forget these and 10 other equally heinous directorial decisions and of course “this is not a stylized production”!

Artless, witless, and soulless as the production was, its music provided the evening’s single success. Lyric’s Figaro was mostly well-cast: Soprano Christiane Karg delivered a spunky, perky Susanna, floating her silvery upper register easily above rowdy ensembles. Her second-act aria, “Venite, inginocchiatevi,” flaunted attractive phrasing and a delicate vocal tone. Adam Plachetka delivered as Figaro but did not impress, frequently swapping his booming, handsome baritone for a barky talk-shout that did little to endear his interpretation.

Amanda Majeski played a rather forgettable Countess Almaviva. Her voice seemed more comfortable in the middle and lower registers, demonstrating audible difficulty when her role demanded the high notes typical for lyric sopranos. At one point during the trio “Susanna, or via sortite,” her sound disappeared completely. Though Majeski recovered for a creamier “Dove sono,” I took issue with her phrasing—she seemed to run out of air by the end of each line—and less-than-clear Italian.

Luca Pisaroni made a dashing Count, armed with a suave, powerful bass-baritone: His only aria “Hai gia vinta la causa” thrilled with bombast and dramatic finesse. Mezzo-soprano Rachel Frenkel delivered a stellar performance as the pageboy Cherubino, pairing a sparkling upper register with keen narrative understanding. During “Voi che sapete” she made clever use of a pillow to conceal an implied erection: doubly clever because a) every teenage boy has done that before, and b) it’s an esoteric pun on the gender ambiguity of trouser roles.

While preparing this review, I thought back to our conversation with Maestro Riccardo Muti of the Chicago Symphony Orchestra last Monday. “Instead of helping the public to become more concentrated on the substance of what art is,” he worries, “we are ruining the quality of the audience.” Last Saturday, Lyric Opera opened its season with a Figaro absent of cultural stewardship. Under the guise of freshness and accessibility it degrades both Mozart and the public. Pity, because the music is quite good.