Pelosi talks issues with Congress and U.S. debt at Institute of Politics 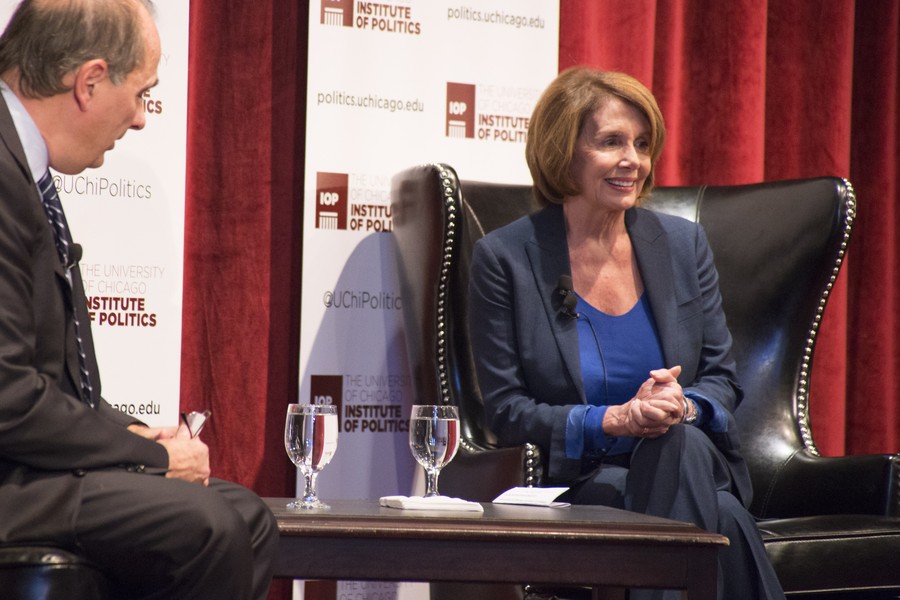 Institute of Politics (IOP) director David Axelrod sat down with House Minority Leader Nancy Pelosi (D-CA) on Friday in front of a full crowd at the International House Assembly Hall.

Since Speaker John Boehner announced his resignation, frontrunner Kevin McCarthy has withdrawn from the race to replace him. In Pelosi’s view, this is the latest sign that the Republicans in Congress are struggling to govern.

“I would be the last person to tell you what is going on in the Republican Caucus, and anybody I might suggest as a good leader would immediately be not considered,” Pelosi said.

“The majority party in Congress is an anti-governance party,” she said, citing Republican opposition to a short-term bill with Planned Parenthood funding that prevented a government shutdown. “President Washington cautioned, as he left office, against political parties at war with their own government, and that’s kind of the situation we have.”

When asked by Axelrod if Congress will pass bipartisan legislation now that Boehner is a “short-timer,” Pelosi replied that Axelrod started asking her about the Speaker crisis without talking about the Cubs, or giving her a chance to say hello.

Axelrod joked that he was getting lectured on his manners.

Pelosi denounced the Republican Party for attempting to cut Pell Grants, social security, and Medicare in order to provide tax breaks for big oil companies. She also alluded to hypocrisy within the Republican Party platform, stating that a large national debt is of primary concern to the party, but student debt is not.

However, when asked if Boehner is committed to raising the debt ceiling by the November 3 deadline, she did not hesitate to respond. “Yes, this is a moral obligation,” she said. “We will lift the debt ceiling.”

The debt ceiling limits the amount of money the federal government may borrow, and failing to raise the borrowing limit could result in a default, which would hurt the country’s credit rating.

But Pelosi couldn’t respond with the same confidence when, moments later, Axelrod asked if the Trans-Pacific Partnership (TPP) will pass. She said that it would depend on how many Republicans vote for the agreement.

The proposed 12-country trade agreement would lower tariffs, but it has faced opposition from members of both parties, who believe it will send jobs overseas.