At 125th anniversary panel, the past and future of civic engagement 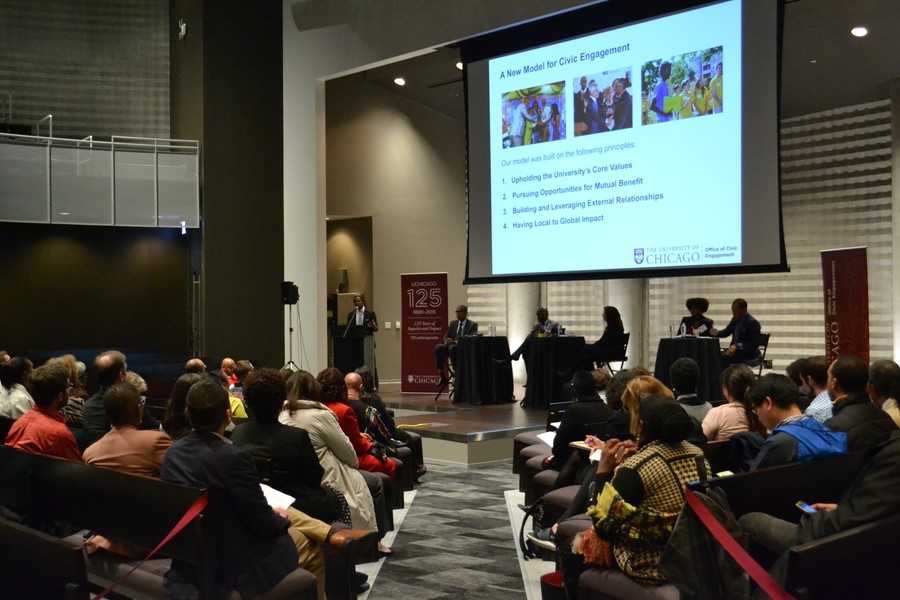 On Tuesday, the Office of Civic Engagement (OCE) hosted a panel at the Gordon Parks Arts Hall to discuss the University’s plans for the next 125 years of civic engagement. The panel also provided opportunities for local residents to provide input on the University’s programs.

Derek Douglas, the University’s vice president for civic engagement, opened the panel with a brief explanation of the OCE’s work. Douglas highlighted programs like the UChicago-affiliated Becoming a Man program, which directly inspired President Obama’s My Brother’s Keeper initiative, and the No Barriers program, which has contributed to a 43 percent rise in first-generation students in the College within its first year.

UChicago Charter Schools CEO Shayne Evans delivered a powerful message about Chicago’s traditionally abysmal college graduation rates, especially among blacks, but noted major improvements in recent years. “I’m here to tell you that there’s nothing wrong with the young person—the young people are in fact amazing—and our goal is to create enough knowledge at the University of Chicago to ensure that more of our students across the nation graduate from college,” Evans said.

Bright Star Church Pastor Christopher Harris discussed how his organization, the Bronzeville Dream Center, plans to train local faith and community leaders for post-trauma counseling, bringing what would otherwise be a costly and stigmatized service to the South Side. They also hope to provide mentoring and workforce development programs to the community.

Finally, Deborah Gorman-Smith, director of the Chicago Center for Youth Violence Prevention (CCYVP), spoke about her organization’s mission to analyze risk factors for local youth. The Center develops intervention programs and provides critical data on area neighborhoods and families to the Bronzeville Dream Center and other organizations.

The panel was then opened to questions from audience members, who asked about issues like the University’s focus on charter schools rather than the Chicago Public School system and the potential benefits of building additional athletics facilities on the South Side. After the panel, breakout discussion sessions were held for attendees to discuss and provide input to the University through feedback cards.

Monica Morrow, a local public school teacher who was in attendance, acknowledged that her colleagues often have a negative view of charter schools, but said, “I enjoyed hearing that the plan is to build a relationship between neighborhood schools and charter schools. The better we do at building that bridge and understanding that the goal behind all of these is to teach children and to educate them at a level that’s above mediocre, that makes some big differences.”

William Scott, a neighborhood resident who asked a question about engaging seniors in community outreach programs, said, “I was more than pleased I came out tonight. There was quite a bit that I know I garnered from listening to [the panelists]…what I heard was quite refreshing.”