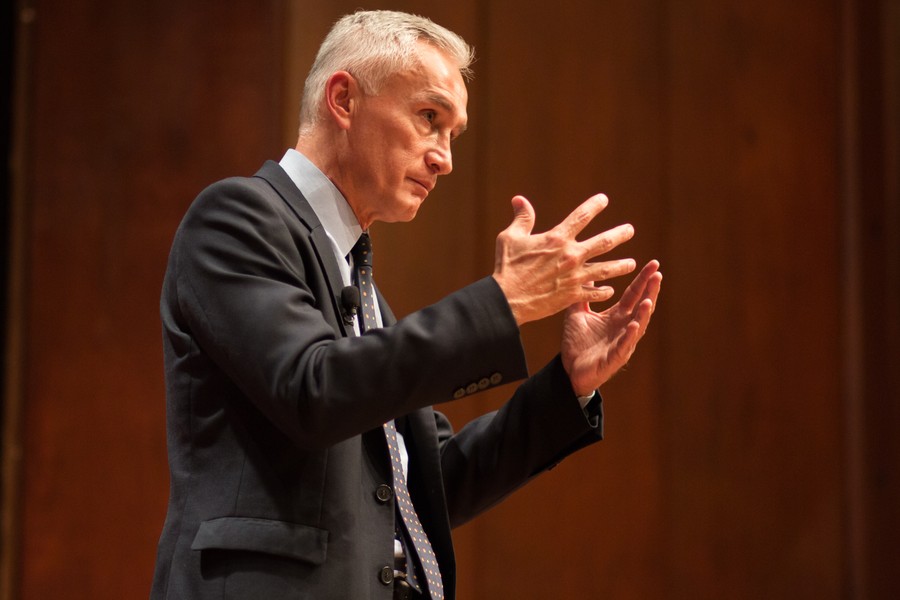 Journalist Jorge Ramos speaks at International House on Wednesday about immigration, the responsibilities of journalists, and the upcoming presidential elections.

Eight-time Emmy Award-winning journalist and Univision news anchor Jorge Ramos spoke to a packed audience in the I-House Assembly Hall on Wednesday night. As a self-proclaimed “proud Mexican immigrant,” Ramos emphasized the intersection between his identity and his reporting.

His talk, which focused on journalism, politics, and Latinos in America, was part of the Institute of Politics’ (IOP) Road to 2016 speaker series and the International House Global Voices lecture series. Third-year Liz Stark, a member of the IOP Student Advisory Committee, introduced Ramos, saying that he “epitomizes what it means to be a fearless journalist.”

Ramos structured his 25-minute talk around three different interview clips. Each clip offered a lesson in journalism, ethics, and “taking a stand.”

“People have been asking me, are you an activist, or are you a journalist?...And my answer is...that I am just a reporter asking questions. However, there are some times in which as a journalist, you have to take a stand.” He later added, “When we don’t do that, we are failing our profession.”

The first clip was of an interview with President Obama in which Ramos asked about U.S. deportation practices. The second highlighted a conversation about racial profiling during police stops with Arizona Sheriff Joe Arapio. The final clip showed Ramos’ controversial removal from Donald Trump’s press conference this summer after he repeatedly asked Mr. Trump to clarify his immigration policy.

The tension between the two had arisen earlier that summer when a personal letter asking for an interview from Ramos to Trump, which contained Ramos’s phone number, was published online without Ramos’s permission. Ramos explained the logic behind his confrontation with Trump, noting that everything was intentionally planned in order to shift the balance of power between interviewer and interviewee to a more equal standing.

At the press conference, Ramos and his crew had three cameras instead of the typical one in order to capture every angle. Ramos was also intentionally microphoned so that his voice would be the same volume as Trump’s even though this is not a standard practice for press conferences. “His voice is as loud as mine. It’s a different balance,” he said.

Confrontation of power was a common thread in Ramos’ talk. He asserted that journalists should be a force, constantly pushing back against those in charge and reporting news to the common consumer.

A question and answer session moderated by IOP Executive Director Steve Edwards followed the talk, and 20 audience members, many of whom had their own personal stories to share, asked questions. Ramos gave his thoughts on a broad range of topics, ranging from Venezuelan politics to the role of Black/Latino solidarity.

When an audience member asked what Latinos could do to with their growing numbers, Ramos highlighted the purchasing power of the 26 million Latinos who will be eligible to vote in 2016. “You have to go vote,” he simply responded.

“One, this is a multi-cultural, multi-racial, multi-ethnic country,” he said. “Second, take a stand when it really matters. And third, don’t give your cell phone to Donald Trump.”