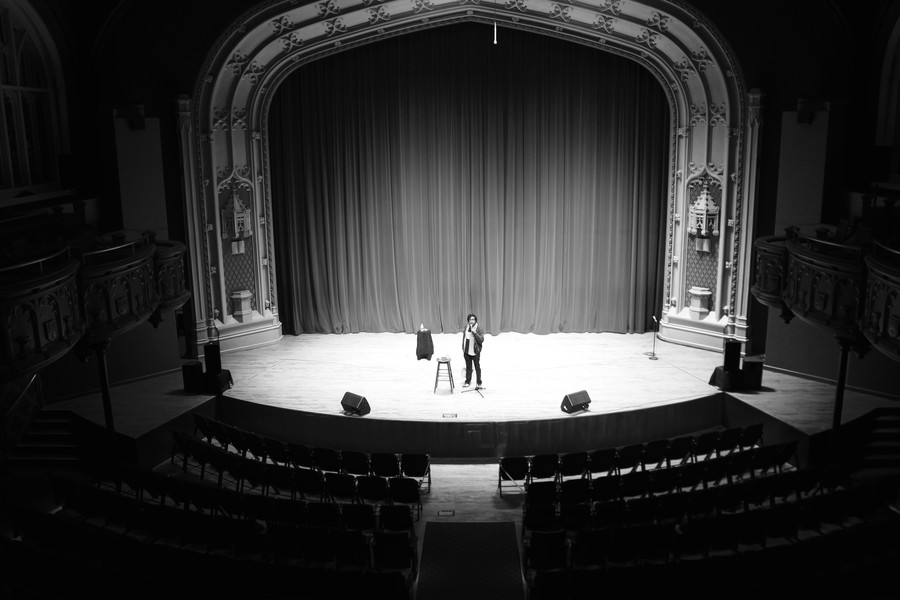 Stand-up comics such as Jerry Seinfeld have begun claiming that they can’t perform for college students anymore. Apparently, we just don’t think anything is funny. But on Friday night, Hari Kondabolu’s performance in Mandel Hall had 500 University of Chicago students in stitches.

Good comedians turn everyday situations or news stories into hilarious anecdotes and knee-slapping one-liners. But the best comedians can take the mundane and reveal its absurdity.

The South Asian Students’ Association invited Kondabolu to campus to do just that.

With a Masters in human rights from the London School of Economics and experience working with nonprofits and other groups before becoming a career comedian, Kondabolu is a comedian whose humor is both whip-smart and responsive to issues of racism and sexism.

In July 2014, The New York Times called Kondabolu “one of the most exciting political comics in stand-up today.” He’s been on Conan, The Late Show with David Letterman, and Jimmy Kimmel Live!. He’s even had his own Comedy Central Presents episode. He made it clear that he might be ethnic, but that his views certainly aren’t. The laughter he gets is to be expected.

While a fair number of his bits (including “the first ever feminist dick joke”) could also be found on his 2014 album Waiting for 2042, Kondabolu also had plenty of new material. On the topic of Halloween, he suggested perhaps brown face paint should be kept behind the counter with the Sudafed, and perhaps those who dress up as Native Americans should be “unjustifiably killed” at the end of the night—just for accuracy’s sake.

He name-dropped—telling stories about the Surgeon General and Vice President Biden’s home—but was always ready to make fun of himself for a laugh. He described single-handedly starting a war with a Louisiana politician over Twitter—from the couch in his apartment with no pants on. It delighted him that the politician later released a statement in response to the comments from “the liberal media.” “I am the liberal media!” he announced in disbelief.

This wasn’t a stand-up show that made students uncomfortable, but it was one that made us think. When it comes to those devil’s advocates, Kondabolu asked why they are interested in doing Satan’s bidding. When it comes to the phrase “boys will be boys,” he pointed out that this is never used for accomplishments. So then why do people persist in saying these things?

In a Q&A after the show, he explained that it’s never the art form—never stand-up itself—that’s the problem. It’s the content people put into the genre. For him, it just makes sense to be funny without encouraging appropriation or objectification.

Before the show SASA offered free samosas and food courtesy of the Bartlett catering fund. Students could also pose with whiteboards reading “Humor is healing because…” or “I fight (blank)-ism by (blank).”

The next day Facebook was inundated by blurry selfies with Kondabolu accompanied with sentimental thoughts. In a world where too many comedians seem to believe college students never laugh, Kondabolu stands out as a comedian who understands that humor is healing and profound, and that even where fun may or may not come to die, we treasure those who can make us laugh.