Not so “Flawless” feminism

Female popstars are increasingly expected to conform to a certain type of feminism. 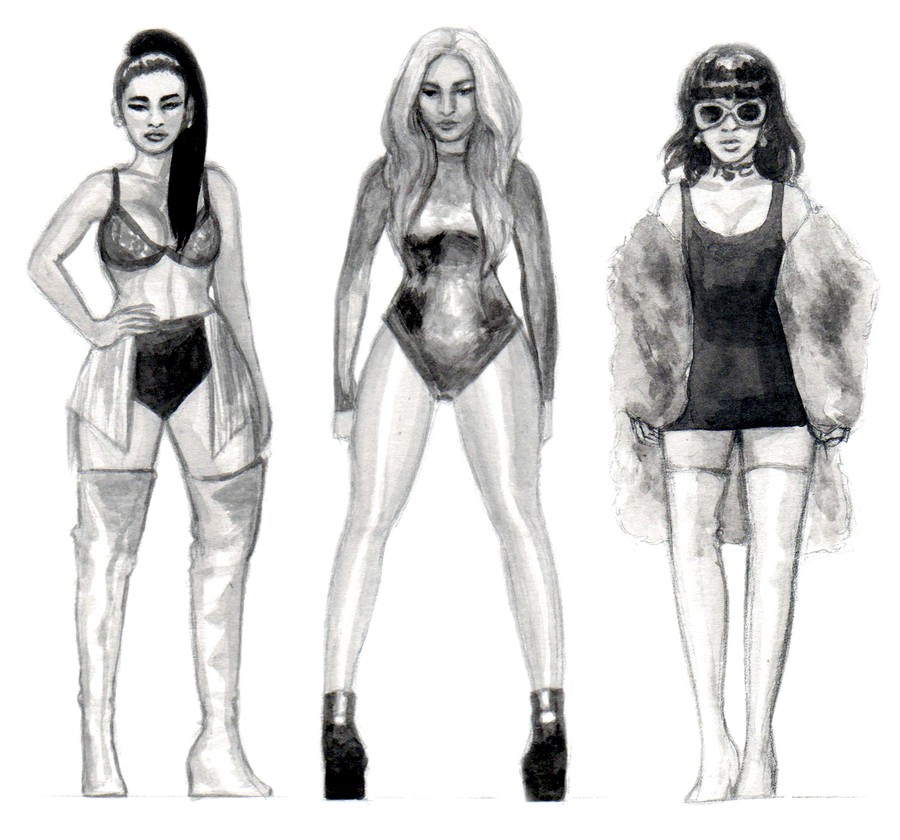 Sometimes, I watch a Beyoncé music video strictly for her outfits. When the “Feeling Myself” music video dropped, I watched it at least 10 times within an hour. My friends and I have even dressed as Beyoncé and Nicki Minaj for the past two Halloweens. I could convince myself that this level of adoration and commitment comes from a thoughtful place of reflection on who these women are as celebrities, role models, and businesswomen—and it does in part—but I’d be lying if I said I didn’t love these women so much because of the way that they look.

It’s not just that they’re black. It does help that they’re known for being bodacious, but I honestly just love how much fun they seem to have being beautiful and cultivating their own distinctive styles in ways that I can’t afford. Honestly, if I could buy a 30-inch kinky straight sew-in every four weeks, I’d be in the salon chair the first of every month. Circumstance has unfortunately worked against me there. Instead, I can only meditate on what my appreciation for these stars says about me, the image they’re selling, how I consume it, and how media outlets present it to me.

The sexy outfits Beyoncé and Nicki Minaj wear represent their ownership over not only their own bodies, but also over their sexualities. This reality is inherently a feminist statement. Both women own these looks; they sensually move about the stage with utmost poise and confidence. Who could forget Beyoncé’s 2014 VMA performance, in which she stood in front of a sign flashing the word “Feminist” as she rocked a tight body suit?

But for many people, these artists don’t represent a complete picture of what feminism is. Perhaps not all of their songs carry an explicitly “feminist” message—from old school Destiny’s Child’s “Cater 2 U” to modern-day “Hey Mama,” Beyoncé and Nicki have both sung about waiting on their men. These ideas don’t always line up with feminist rhetoric that a woman shouldn’t be submissive to men. Besides lyrics, people also take issue with these women’s images. They argue that in sexualizing themselves—talking about their bodies and dressing scantily—these women are playing into the male gaze. Ultimately, these ideas represent little more than counter-productive gender-policing.  And this type of thinking, quantifying the actions and statements of women by how “feminist” or “non-feminist” they are, is prevalent well beyond the world of pop music. It is a constant in our everyday lives.

The fact that the feminist movement is so mainstream and present in our current culture is heartening. Yet, I am displeased that the media, at times, only praises works created by female artists depending on if they promote a stereotypical feminist narrative.

A recent Noisey article entitled “Why Do Songs by Female Pop Stars Always Need to Have a Feminist Message” anchors this argument in the public’s reaction to Rihanna’s single “BBHMM.” The song was praised when the audio file was released as a powerful, assertive, feminist song. But, when the music video was released, many questioned its depiction of girl-on-girl violence, and if such violence was consistent with mainstream feminist ideals.

At the end of the day, these arguments feel restrictive—is critiquing Rihanna’s creative work the best way to discuss its feminist impact? Can we equate “goodness” or “badness” with the extent to which a song or video has a feminist message?  Can I appreciate Rihanna as an artist without her being some kind of bastion for feminist ideals in every work? Apparently not.

I can feel peers or my friends evaluating me based on my level of engagement with these ideas, which is normal. What is not normal is when my friends and I judge other girls on campus for, essentially, not seeming “feminist enough.” I can feel other people doing the same to me, this cartoonish form of deduction about what kind of person I am based simply on whether or not I see myself as a certain type of feminist.

Feminism is not a thoroughly defined movement. There aren’t particular rules that dictate that you have to be an independent, empowered, or completely asexual woman to be a feminist. We shouldn’t discount Beyoncé because she wears revealing clothing, or Rihanna because her video is violent; they are feminist role models, but also artists, and also complex and creative human beings. We need to realize that feminism is many different things to many different people and its manifestation in other people’s actions depends on its interactions with other facets of their identities. Ultimately, by imposing on young women certain ideas of what feminism should look like, we do more harm than good.

Kanisha Williams is a second-year in the College majoring in political science.