Statistics show that victims of violent crime are far more likely to be individuals of color, not rich white kids who “feel unsafe” 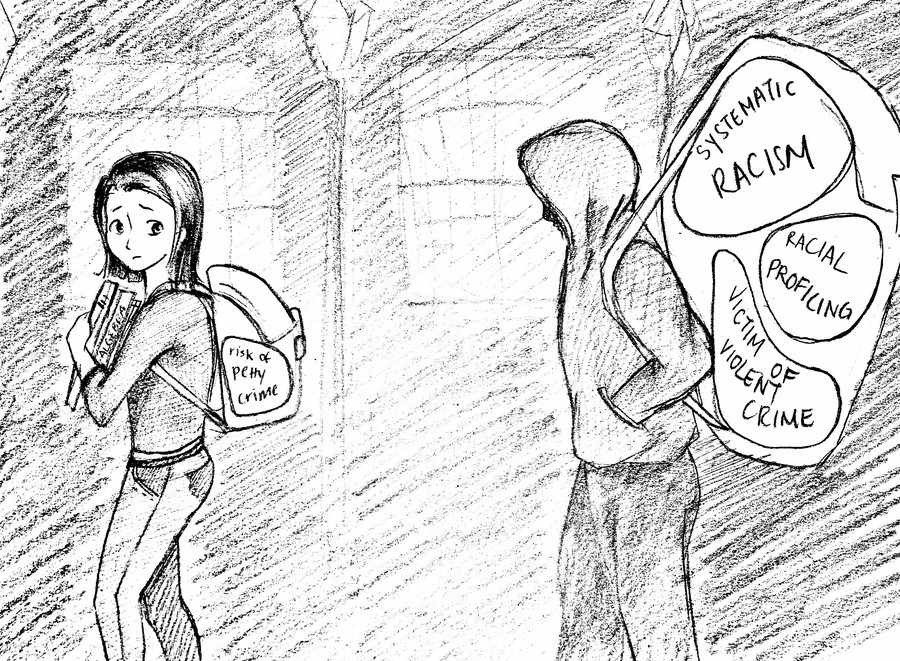 As a University of Chicago student, it is a point of pride for me that I often study late into the night at the library, returning to my dorm across the Midway sometimes as late as one or two in the morning. If I happen to leave with a friend, more often than not they will exclaim, “It’s so late! This is so scary… Don’t you feel unsafe?”

There’s a lot that goes through my mind when someone asks me a question like this. I grew up in a wealthy neighborhood in New York but was raised by parents who grew up there in the violent and turbulent 1970s. They taught me that no matter where I am, who I’m with, or what the time of day, I should always be looking over my shoulder—especially as a woman “of a certain age.”

But ultimately, the reality of crime for a white, upper-class woman like myself is more or less nonexistent. Yes, I’ve had friends of similar backgrounds mugged, and I have seen phones and $20 bills stolen out of back pockets, but these types of crimes are ubiquitous in all cities. But violent crime? I’ve never been witness to or victim of any—and growing up, I’ve known only a few who have been. And that is a point of enormous privilege for me—that because of my white skin and nice clothing, I will be safe almost anywhere I go.

So when I leave Harper alone at 1 a.m. and the Midway is deserted, do I feel unsafe? No. I am sure that some will call me naïve, but the reality is that while many people are not safe in these neighborhoods, I am not one of those people.

Those most in danger—most likely to be the victims of violent crime or to face brutal repercussions for petty crime—are individuals of color, and in particular young males of color. So when friends from middle- and upper-class backgrounds who are not people of color tell me that they feel “unsafe,” I am compelled to explain why, in fact, they are not. The kid who’s really unsafe is the black boy walking around with his hoodie on.

Statistically speaking, yes, the neighborhoods surrounding the University do report more crime than most others in the city. But it’s also worth noting that in 2014, the most recent year for which full statistics are available, there were no reported incidences of violent crime occurring on “public property” around the University, defined by the UCPD as “all publicly owned property within the campus…or immediately adjacent to and accessible from the campus.” In fact, the only crimes that occur immediately around the campus, more or less, are petty crimes like theft and vandalism.

According to heyjackass.com, an unaffiliated group that regularly tracks Chicago media and police sources to carefully collate their statistics, 79.7 percent of homicide victims in the city of Chicago were black. More than 90 percent were male, and the majority were between the ages of 18 and 24. Similar statistics from the United States Bureau of Justice Statistics show that, nationwide, victims of violent crime are far more likely to be individuals of color.

And the University of Chicago Police? Many students view them as a bastion of security, one that can save them from the “Big Bad” of violent crime. But the UCPD does little more than help to maintain the protective bubble that surrounds the school, effectively shutting out any “suspicious” characters—mainly young men of color. A 2014 article in The Gate, Chicago’s undergraduate political publication, detailed numerous instances of racial profiling of students and neighborhood residents and the unequal treatment that individuals not affiliated with the University receive.

From a student perspective, one of the easiest things we can do to actually stop crime is to shift our narratives around safety and policing. If you, like me, are privileged enough to be from a higher-income background and/or are white, then stop saying you feel unsafe. You’re not. Stop acting like the neighborhoods around us are “dangerous” and that the police are the only ones standing between you and the communities that our school, in reality, has successfully shut out.

Ultimately, when we continue to say these things and act these ways, we perpetuate systemic racism and promote police brutality. The more we say we’re unsafe, the more we reinforce the idea that we are, and the more we destroy any chance for safer communities in the long run.

Lily Grossbard is a first-year in the College majoring in gender and sexuality studies.