Students hold vigil for victims of terror around the world

The event was sponsored by UChicago Spiritual Life, the French Club, and the Turkish Students Association. 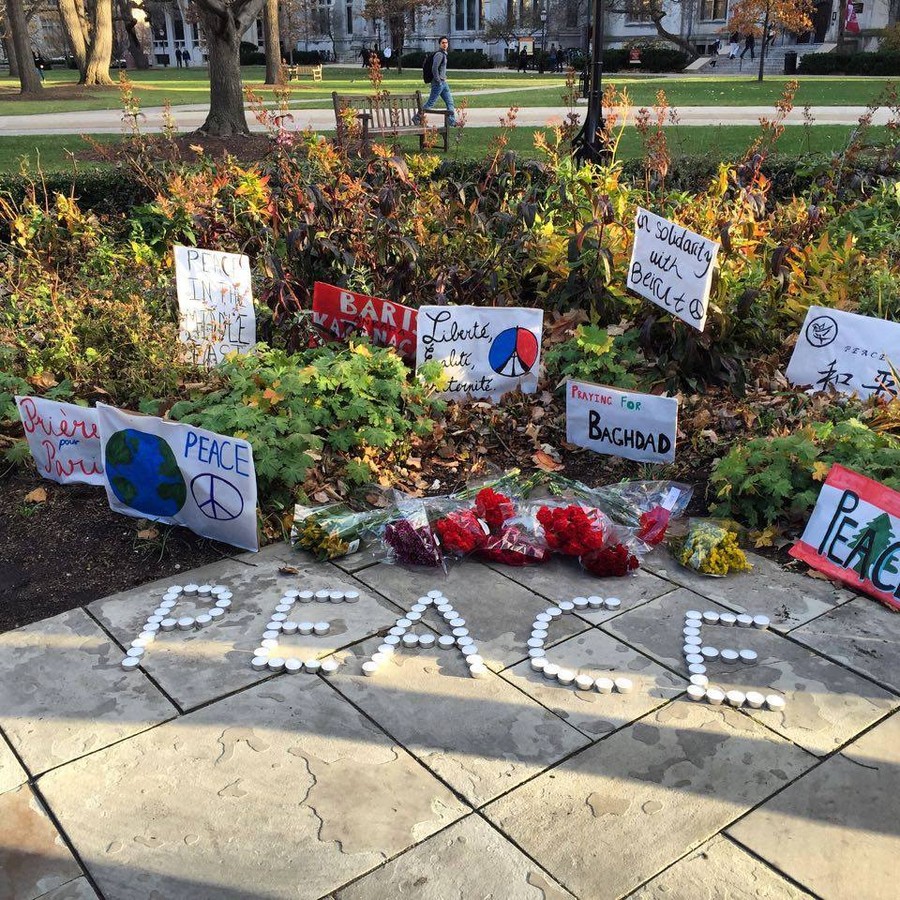 About 100 students attended a “Vigil for All Victims of Terrorism” on the Main Quad on Thursday in response to recent terrorist attacks in Paris, Ankara, Baghdad, Beirut, and Garissa, among others.

UChicago Spiritual Life, the French Club, and the Turkish Students Association sponsored the event, in which students gathered to mourn victims everywhere. Attendees lit candles around bouquets of roses and signs pleading for peace in an effort to raise awareness about each attack.

The half-hour long vigil included words from second-year event organizers Rajiv Hurhangee and Asya Akça, the heads of each participating RSO, and Kevin Bales, the Pozen Visiting Professor in Human Rights. A moment of silence followed, until a single man in the crowd began to sing “Let it Be,” and a handful of crowd members joined in.

Hurhangee and Akça believe that although terrorism affects civilians all over the world, the global media has been disproportionately focused on the November 13 deaths in Paris.

In some cases, this frustration with a single-issue news cycle arose from students’ personal connections to those affected areas that they believe have been overlooked. “For me, the Ankara attacks hit really close to home—in fact, they hit in my home country. It took an emotional toll on me, and there was no sort of ceremony or form of closure that I had as an individual, so that was the impetus to plan this event,” Akça said.

Because the vigil was dedicated to all victims of terror, controversy arose on the event’s Facebook page over whether it should include those affected by fighting between Israelis and Palestinians. “We talked extensively about the definition of terrorism, because some people had asked us, ‘why did you include these cases over those?’ It was not supposed to be a comprehensive list; it was just supposed to show that terrorism is not a phenomenon that only affects Paris,” Hurhangee said.

Bales advocated for an approach emphasizing forgiveness. “It is a myth that there is such a thing as ‘redemptive violence.’ This is the most powerful and destructive myth in our lives—that if you confront evil with violence, you can somehow redeem violence. No, violence begets violence. Our real challenge is to break the chain of damage that echoes and echoes through Paris, through Chicago, through all the parts of our world,” Bales said.