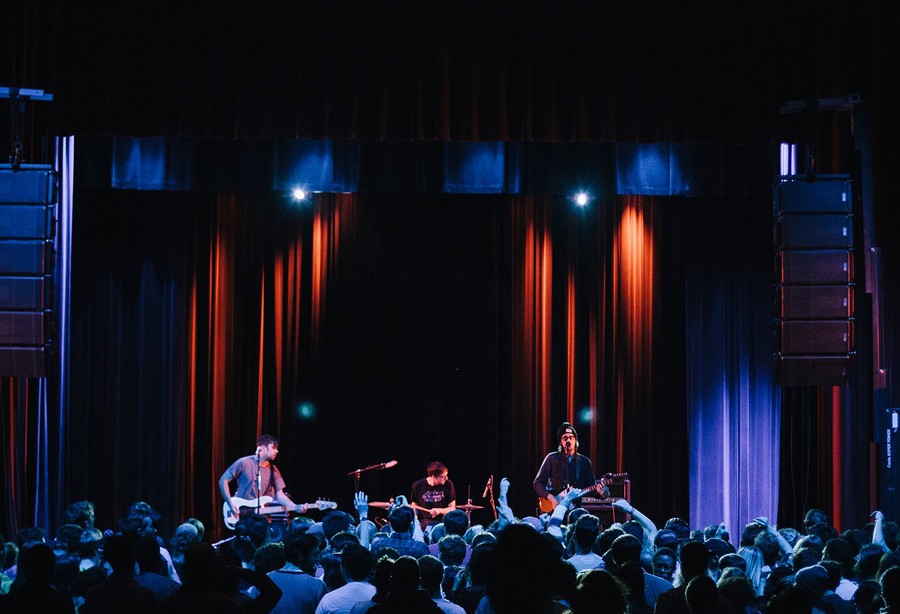 I feel that I should start off this review by giving a big shout-out to MAB for diversifying their lineup for this year’s fall show. Instead of an EDM artist opening for a rapper like the previous two fall concerts and last Summer Breeze, MAB brought electronic/R&B artist How to Dress Well (HTDW) to open for punk rock band Cloud Nothings. It was almost the antithesis of the normal MAB lineup and a welcome stylistic departure that hopefully sets a precedent for the representation of more genres at future MAB events.

Unfortunately, MAB’s efforts to diversify the lineup did not increase the amount of interest in the show. While attendance was certainly impacted by the poor weather that evening, I’ve seen bigger crowds for bands at Bar Night. This pitiful turnout sends the wrong message–that MAB should stick with its formula, even if it means scraping the bottom of the barrel to get good acts (I’m looking at you, Pusha T). That said, the acts were somewhat from out of left field.

After the opening DJ, HTDW took the stage, dressed in classic indie fashion, with skinny jeans and a white t-shirt on top. HTDW is the stage name of Chicagoan Tom Krell, who was joined onstage only by his drummer and two mics. His soft voice glided over dreamy synths, reminding me of some of James Blake’s better recordings. The set was surprisingly intimate: the small crowd clustered close to the stage, and Krell engaged well with the audience. At one point, he even had an impromptu Q&A session with the crowd—surprisingly, no one asked him how to dress well.

However, stuck between punk rockers and a DJ, HTDW felt a bit out of place. The crowd was already hyped from opening act Boi Jeanius, and instead of keeping the energy going, HTDW was a much slower act. Try as he might, HTDW never got the crowd’s undivided attention, and certain spots that could have been concert highlights—such as one part when he left his mic setup to finish a song acapella at the front of the stage—were largely drowned out by the slightly-inebriated audience. As fun as they were, HTDW never really hit their stride until the last song, “Words I Don’t Remember,” a song whose beat was just heavy enough to get people dancing again.

Next onstage was the headliner, Cloud Nothings. Unlike HTDW, Cloud Nothings sprinted through their set, wasting no time on crowd banter. I can’t really comment on the quality of Cloud Nothings musically—only one or two of their songs really jumped out at me as particularly memorable—but what I will say, though, is that they succeeded in creating a charged atmosphere. As they started their first song, the center of the crowd immediately descended into a giant mosh pit that lasted nearly the entire evening. The concert from this point on was a blur of killer basslines, driving guitars, and flailing bodies struggling to stay upright.

Like HTDW, Cloud Nothings’ final song was a high point of their set. A mix of a couple of their songs, it seemed to go on forever in the best kind of way, with initial guitar riffs bleeding into a slower bridge. This was overtaken by an explosive drum solo, which kept the energy high until the end of the concert.

While the attendees seemed to have a rocking time, leaving Mandel sore but satisfied, the concert ended up being a rather niche affair. The crowd was overwhelmingly white and male. While MAB has included many females acts in the past—last year’s winter comedy show featured Sasheer Zamata and Summer Breeze’s headliner was Azealia Banks—the last woman to appear onstage at the fall show was the lead singer of Sleigh Bells in 2012. Hopefully as MAB diversifies musically, they will diversify demographically too.

It’s not yet clear how Cloud Nothings and HTDW will fit into the history of MAB shows, but we can only hope it’s an experiment that foreshadows a new wave of MAB lineups—not just a blip on the radar in a sea of rap and EDM.