Outside that system defies boundaries of university, UCPD 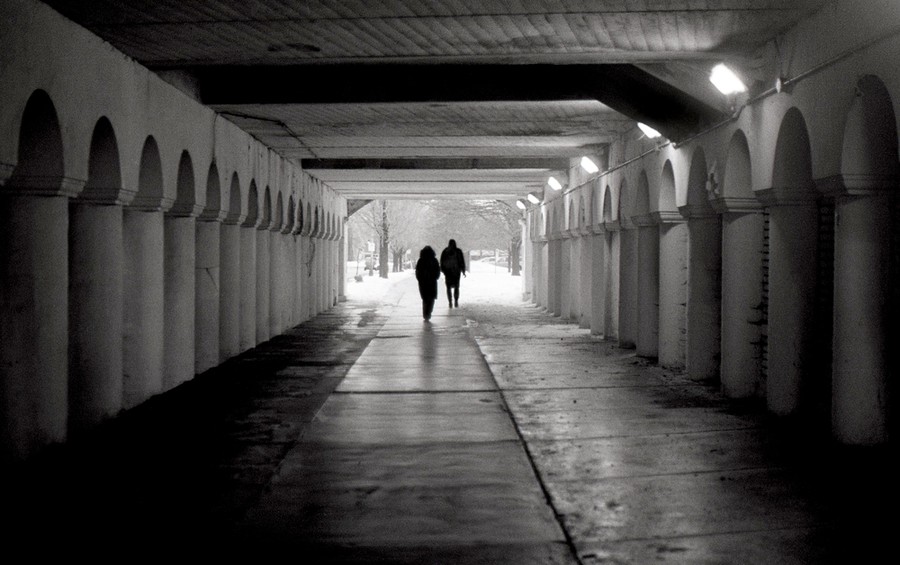 For her project Outside That System and Hence Unspeakable, third-year Juliet Eldred spent several weeks walking around Hyde Park photographing places within the University of Chicago Police Department’s jurisdiction.

After making her photographs public on her website last month, Elder was interviewed by Mike Stephen for WGN radio and published an article in the South Side Weekly. Eldred has been working on her photo essay for a long time: She began her project last winter as part of her advanced photography class, but her inspiration dates back to something she was told during O-Week of her first year.

The patrol zone, which extends from East 37th to 64th Streets and South Cottage Grove Avenue to South Lake Shore Drive/South Stony Island Avenue, includes many blocks unaffiliated with the University. To better visualize this massive territory, Eldred divided buildings into three categories that she refers to as spatial typologies.

Eldred described her enterprise, a series of black-and-white shots, as a cross-disciplinary project using photography and archival research. She is most interested in observing seemingly banal spaces as a way to understand the definitions of space and place. In that vein, her subjects range from a dilapidated alley way with a worn out basketball hoop to corner stones of buildings, tunnels, and a lone swing.

Through her artistic pursuits and research, Eldred discovered that, as a private police force, the UCPD boasts massive numbers—one of the largest in the nation.

“Of the 65,000 people under the UCPD patrol jurisdiction, only 15,000 are university-affiliated, which means that 50,000 unaffiliated people live within the jurisdiction of a private police force,” Eldred said.

Eldred commented on another discovery she made through her weeks of attention to space and boundary:

“There so many dead ends, cul-de-sacs, or streets that just sort of don’t really go anywhere,” Eldred said. “I know they were not always that way, and this is at least in some way an attempt to constrict mobility."

In Hyde Park, there are only two streets—South Woodlawn Avenue and South Cottage Grove Avenue—that run uninterrupted north to south from East 47th Street to East 63rd Street. Over the last 50 years, the University has been expanding and acquiring more property in Hyde Park, and, in that time, extensive construction has altered the neighborhood’s buildings and streets, creating a patchwork maze of city blocks.

“The dead ends are spatial manifestations of the university’s desire to make it more difficult for outsiders to enter,” Eldred said. “What are they trying to say? We don’t want you here.”

Despite her disapproval of some aspects of the UCPD, Eldred says she is not an activist. However, she hopes her work will prompt people to think critically about their surroundings.

“I am not necessarily trying to effect policy changes in my work, but at the very least I want people to consider the extent of the policing boundaries and what they mean and also the umbrella of the University of Chicago and how these definitions and places came into being.”

To view the photographs and learn more about the project, visit Eldred’s website at unspeakable.info and keep an eye out for her flyers hanging up in Hyde Park.