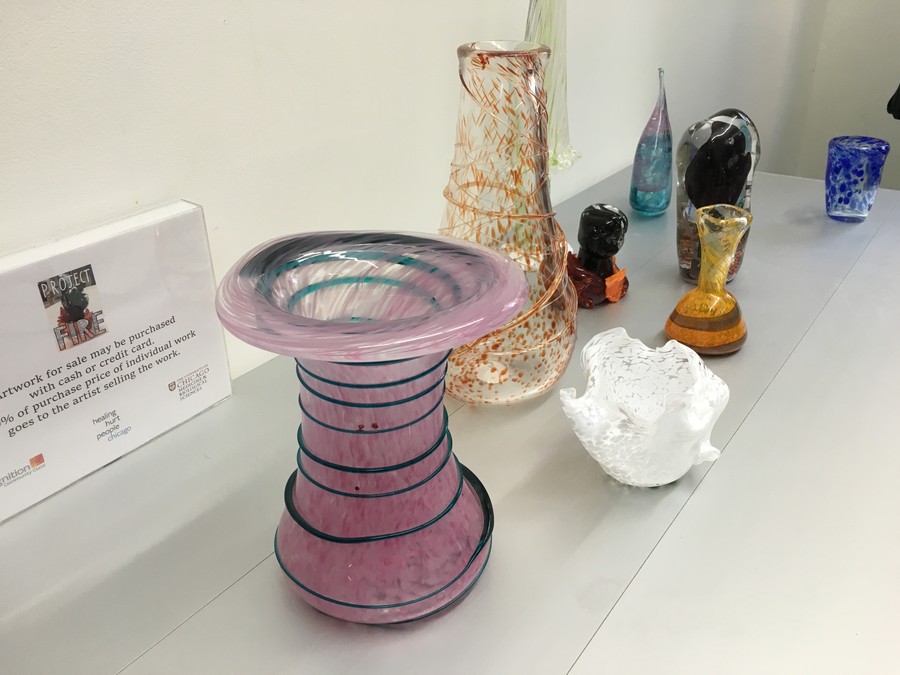 What do after-school glassblowing, an original theater production, and religious trauma counseling have in common? Despite their apparent disconnection, all three of these programs are part of the University of Chicago Medical Center’s (UCMC) effort to address violence and crime prevention in the South Side of Chicago.

Through various programs, such as the Urban Health Initiative and the Center for Community Health and Vitality, the UCMC supports and funds numerous community health and violence prevention initiatives. Three of these programs are: Project Fire, an after-school glassblowing program for youth who have been affected by gun violence, Community Grand Rounds, a health and wellness education outreach program, and Brightstar Community Outreach’s Bronzeville Dream Center, a post-trauma counseling center in Bronzeville led by faith and community leaders.

Leif Elsmo, the executive director of community and external affairs at the UCMC, said the violence and crime prevention programs are part of the UCMC’s larger attempts to address community health needs.

“There are data that say…[it is] important for community health in general if we work together on addressing these issues, because a safer community is a more healthy community,” Elsmo said.

According to Elsmo, these programs are a collaborative effort between local organizations and the UCMC to improve community health.

“We have some resources here—faculty, knowledge, medical students, and other resources—that can be helpful in helping communities work on addressing health needs. We also believe that the communities are our neighbors and have assets as well that can address some pressing health needs. We try to bring those things together, so we work in collaboration where possible to improve health,” Elsmo said.

Funded by the Urban Health Initiative, Project Fire is an after-school glassblowing program started in March 2015 for young people who have been affected by traumatic violence in Chicago. Developed by clinical psychologist Dr. Brad Stolbach of the UCMC, Project Fire is a therapeutic program aimed at providing psychological counseling and preventing the recurrence of violent incidents by providing a safe space and community for youth affected by violent trauma.

The idea for Project Fire came after Stolbach heard about its therapeutic potential from a colleague, who was taking glassblowing classes at the time. The colleague connected Stolbach with her instructor, Pearl Dick, and together they started applying for funding in October 2014.

Stolbach explained that Project Fire challenged common media portrayals of young black men, educating the medical community and the public about the contexts in which gunshot and knife trauma occurs.

Stolbach also pointed to an economic advantage to the program, as most violent trauma injuries are expensive to treat and recur within five years of the first incident.

“We can try to intervene and reduce the likelihood they are going to come back with another injury. That benefits [the patients] and also the institution because these are very expensive injuries to take care of, and we don’t have a health system that adequately covers the costs of benefit care for poor people,” Stolbach said.

Alex Harris, an 18-year-old participant in the program, joined Project Fire after he lost his brother to gun violence a little over a year ago. He says glassblowing serves as a form of meditation, and looks forward to entering the medical field in the future.

“To me, the glass is alive. Most of the time, it’s moving; every time you turn the pipe it goes one way, then you have to turn it another way, and you’re constantly rolling your wrist. Eventually, you get a rhythm,” Harris said. “While you’re subconsciously doing that with one hand, with another hand you’re over here just using your tweezers or your jacks or your shears, and you’re either cutting hot glass away or using your tag wheels to mold it into a star….Eventually, once you do it so much, it’s just subconscious. It changes everything, it gives you something to do, gives you something to look forward to.”

Community Grand Rounds, funded by the Center for Community Health and Vitality, is a health and wellness education outreach program run by Dr. Doriane Miller of the UCMC. The program, launched in 2010, hosts events in community centers outside the University where community members can discuss with and ask questions to medical professionals about broad health issues such as diabetes, mental health, and gun violence. Miller, a primary care physician, says that the inspiration for the program sprung from her experience working with grieving patients.

“When I would start asking about their past medical history, social history, some of whom had been shot themselves, they did not make a connection between what their physical symptoms were and their unresolved grief and distress over what had happened to them or a loved one,” Miller said. “That’s when the lights started going off for me as a primary care provider to say, ‘It’s not about giving somebody medication, it’s about what has happened to them in their lives and how it’s being manifested in other ways.’”

One early success of Miller’s program was an original 2010 play called *It Shoulda Been Me*, which addressed the psychological effects of violence and trauma on South Side youth.

“[The play] addresses the issue of a young man whose friend was killed in a drive-by, the subsequent deterioration of class relationships, and the potential of a teacher coming in and talking with the family members and the young man about ways in which he could start to heal and develop some resilience,” Miller said.

The play was so successful it was picked up by a local South Side theater company and performed for over 60 middle and high schools in Chicago over a two-year period.

The Bronzeville Dream Center, a program run by Brightstar Church and funded by the Urban Health Initiative, provides post-trauma counseling from faith and community leaders for residents of Bronzeville. Pastor Chris Harris, who founded the Dream Center in 2012, said that the program was developed due to social norms and stigma deterring black and brown people from seeking clinical therapy.

Indicating the need for independent, non-governmental funding, Harris expressed satisfaction with the way the UCMC and Northwestern had invested in Bronzeville.

“We want to have the right type of proper funds to be able to provide the services that our community needs. What the universities have also been sensitive to is that a lot of times, these organizations or universities or medical centers will come into communities and they do research, and they get the data, but they never provide resources or programming to change the issues,” Harris said. “But that’s not the case with the University of Chicago and Northwestern, and we’re really, really excited about this.”

Harris is beginning another violence prevention program, combining prevention science and social development strategies, with funding from the University of Chicago and Northwestern University called Communities That Care (CTC). CTC has already completed a 127-question survey of over 1,600 middle and high schoolers in Bronzeville on various social conditions that may lead to violence and tension.

Harris indicated that the survey may open the door for evidence-based violence prevention programs, though he did not mention any details since they have not yet been implemented.