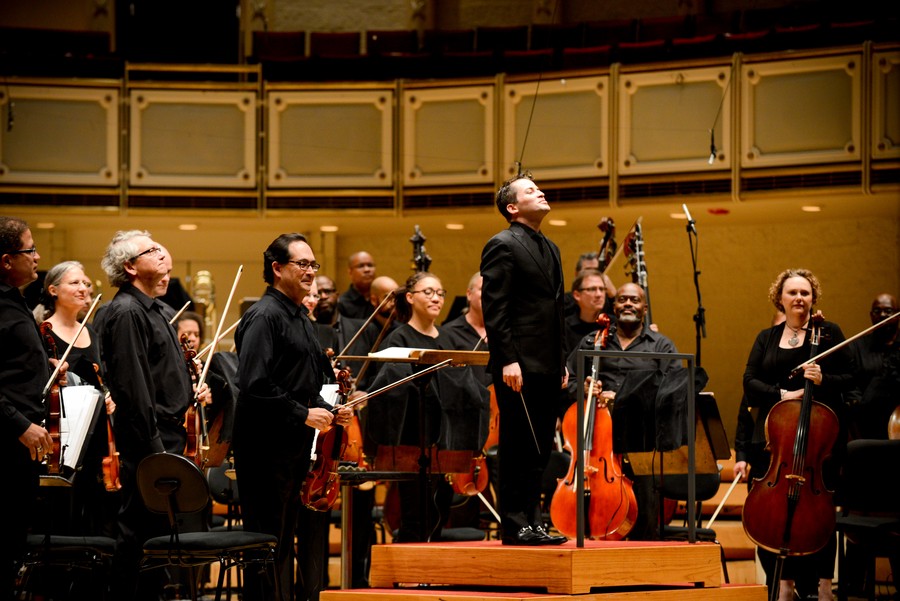 Alongside the Chicago Sinfonietta, conductor Andrés Franco bows for a receptive audience in Orchestra Hall.

Having attended plenty of Chicago Symphony Orchestra (CSO) concerts in the past year, I’m accustomed to routine. Every concert, I take my seat, gloss over the program notes, and perhaps wander to the Grainger Ballroom—a grand, opulent space on the second floor of Symphony Center—to stretch my legs during the interval and watch Chicago’s white-collared elite sip merlot.

But on Monday night, the CSO was out, having returned from a domestic tour just a few days before. That left the Chicago Sinfonietta—a treasured, if not lesser-known local mainstay—to take over the space and shake things up for its first concert program of the season, a Día de los Muertos-themed celebration.

And shake it up, they did. The buttoned-down, predominantly white mass that so often frequents Symphony Center refracted into a rainbow of faces—young, old, black, white, brown, sneakered, bow-tied, and everyone in between. Even Grainger Ballroom itself was splashed with color, strewn with festive decorations and activity stations—a coloring table here, a costume prop station there. All this was centered around an interactive offering table, upon which patrons could pin the names of deceased loved ones during intermission.

Needless to say, the Chicago Sinfonietta isn’t your grandparents’ symphony orchestra. It’s something more vibrant, laid-back, and intrepid all at once—a formula enticing to both seasoned aficionados and classical music initiates alike.

Such is the legacy of conductor Paul Freeman, who founded the Sinfonietta in 1987 and died this summer at the age of 79. Though Freeman may have passed the baton to current music director Mei-Ann Chen in 2011, the orchestra remains committed to Freeman’s raison d’être, which is to increase the visibility of nonwhite musicians and composers. As a case in point, three of the six composers on Monday’s program—which was dedicated to Freeman’s memory—were Latin American. 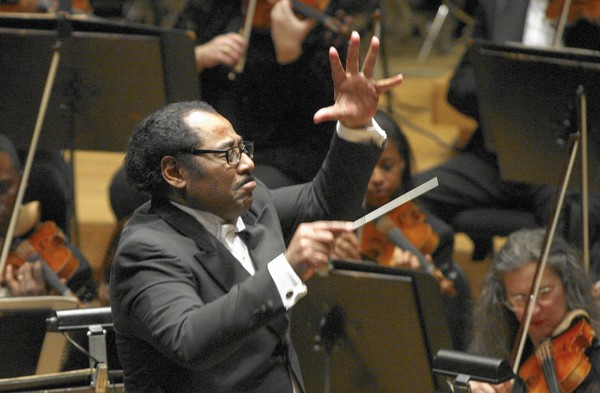 The program began with Samuel Barber’s wrenching Adagio for Strings, in a gorgeously contoured and amber-warm interpretation. The lights in Orchestra Hall were dimmed throughout, then faded to complete darkness as the choir filed across the terrace, singing the “Dies irae” plainchant. As they entered, each member of the chorus clasped a small, white light, evoking the movement of stars across the sky.

After the choir completed its celestial migration, it joined the orchestra for three movements from Gabriel Fauré’s Requiem. The three selections were organized so that the elegiac first and fifth movements were performed before intermission, with the seventh movement saved for the second half.

As it happened, high school-aged voices fit Fauré’s masterpiece quite well. The young vocalists were mature enough to meet its technical demands but were endowed with a softness of delivery well-suited for the Requiem’s pastels. Alongside the intuitive accompaniment of the Sinfonietta, the Waubonsie Valley Choirs delivered a profound, hair-raising interpretation that was impressive regardless of age or professional experience.

Two three-movement suites by contemporary Latin American composers sandwiched intermission: Ofrendas by Chicago-based composer Elbio Barilari and Three Latin American Dances for Orchestra by Gabriela Lena Frank. Commissioned by the Sinfonietta for the concert, Ofrendas is an evocative triptych of motifs associated with Día de los Muertos, with stylistic undercurrents reminiscent of Silvestre Revueltas. The first movement, “Mictecaihuatl,” is named for the Aztec queen of the underworld, and sounded accordingly: distorted and dirge-like, similar to the awakening of some long-dormant beast. The ensuing dance movements—“Marigold” and “Dance of the Sugar Skulls”—fittingly united the playful and grotesque.

Before conducting Frank’s Three Dances, Franco quipped on the podium that the Berkeley-based composer may “take the prize” for the composer most representative of the Sinfonietta’s mission. An American of Chinese-Peruvian and Lithuanian-Jewish extraction—and a woman to boot—Frank also took the prize for the most sonically intriguing contribution on the program. In the second dance, “Highland Harawi,” the strings are directed to play in a staggered, delayed fashion that mimics the sound of echoes—an ingenious expansion of space.

After the angelic last movement of Fauré’s Requiem, the program hit its only major stumbling block with the odd inclusion of Richard Wagner’s Ride of the Valkyries. Though this detour into Germany is understandable within the context of its source opera—in which fallen heroes are whisked away to Valhalla, the hall of the Norse gods—it was paired poorly with the preceding “In paradisum” movement of the Requiem, and seemed to just be thrown in as a recognizable crowd-pleaser.

Luckily, all was forgiven when the Sinfonietta brought it home with José Pablo Moncayo’s rollicking Huapango, played with as much joy from the orchestra as the audience felt in receiving it.

Surely, Freeman would have shared in this mutual joy, had he been present at this concert. During an emotional speech given at intermission, Sinfonietta violinist James Sanders paid tribute to Freeman, whose every mention was met with hums of approval from the audience. Paraphrasing Freeman’s mission, he asked the audience, “Why is diversity important? Is diversity important?”

“Yes!” came an emphatic cry from the balcony. The cries proliferated, then were overridden by applause.

In a genre that is too often marred by socioeconomic exclusivity and homogeneity, the Chicago Sinfonietta is a resounding voice in the classical music world, insisting that yes, diversity is important. As Monday’s concert affirmed, there is much to celebrate, but also much to be done.