CSO and UChicago plan daylong Bach party on South Side 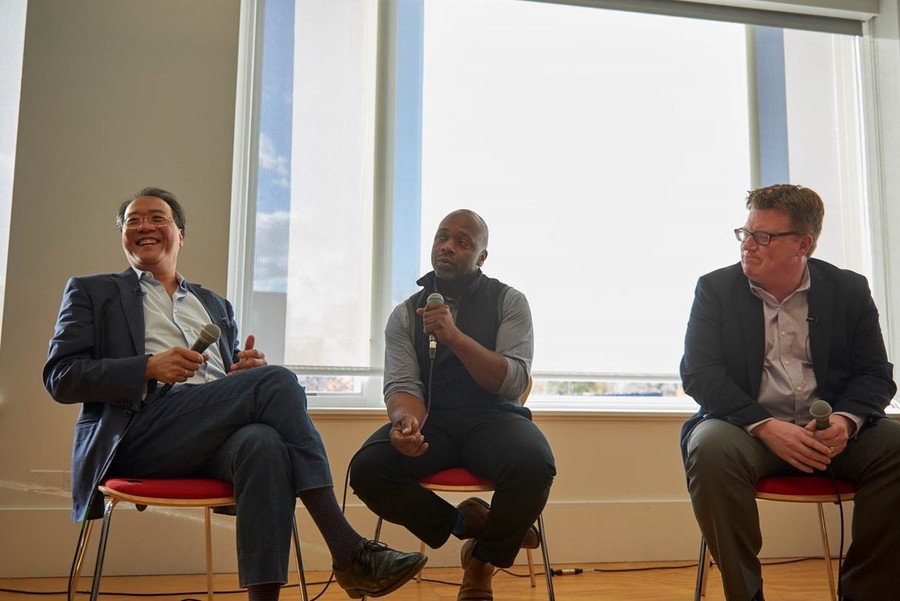 At most times of the day, the area around Washington Park’s Garfield Green Line station is characterized by a solemn stillness. Lined with boarded-up storefronts, the streets boast few pedestrians, save for those shuffling off a sporadic stream of buses. Only whizzing cars and, occasionally, the tectonic rumble of trains overhead break the quietude.

Thanks to a collaboration between the University of Chicago and the Chicago Symphony Orchestra (CSO), however, another sound—albeit an unlikely one—will soon pierce the silence: the stately strains of Bach’s Brandenburg Concertos.

The music will be part of this Thursday’s Bach marathon, in which small ensembles from the CSO’s pre-professional Civic Orchestra will perform all six concertos and selections from The Art of Fugue in various community locations around the South Side of Chicago. UChicago’s Arts Incubator and the KLEO Community Family Life Center—both on Garfield Street—are just two of ten community spaces that will be transformed into concert halls for the free, daylong event.

Last month, cellist Yo-Yo Ma and conceptual artist Theaster Gates—the CSO’s Judson and Joyce Green Creative Consultant and the University’s Director of Arts + Public Life, respectively—met in the Arts Incubator before an audience of Civic Orchestra musicians, reporters, and local representatives to discuss their hopes for the Marathon.

“There’s this [misconception] that different kinds of music need to live in different kinds of places—that classical music is white music and doesn’t have a place in black neighborhoods,” Gates explained. “What I’m interested in is: How does excellence happen everywhere? We can try to create these moments of interruption from whatever we imagine as normal.”

Both Gates and Ma know a thing or two about interruption. A potter-turned-urban planner, Gates is prone to speaking about social change in terms of pottery. (“I believe that things can be shaped and reshaped. Nothing’s absolute. Everything’s plastic; just heat it up.”) His ambitious projects take neglected buildings on Chicago’s South Side and reimagine them as creative spaces, the Arts Incubator being one such project. Ma himself is something of an outlier in the classical world for his blend of genre-bending curiosity and down-to-earth accessibility. During the public conversation and subsequent social hour, he often broke off in the middle of a thought to enthusiastically greet Civic musicians.

Though the Marathon marks Ma and Gates’ first collaboration, the two men bantered like old friends. When Ma mentioned that Bach was “one of the greatest improvisers the world’s ever known,” Gates deadpanned, without missing a beat: “It’s ’cause he was black.” Later, an impromptu take on the famous “Flower Duet” from Léo Delibes’ Lakmé sent the men into childlike paroxysms, Ma playing air cello and Gates theatrically gesticulating.

Despite these antics, their conversation was permeated with a deep thread of seriousness about the upcoming event, and, more generally, the need for an artistic dialogue between entities like the CSO and the surrounding communities.

“It’s a big trek—both psychologically as well as physically,” Ma said, referring to the distance between the South Side and downtown Chicago. “But we want great things to happen in this great city, in every neighborhood.”

At one point, Gates asked Ma how he “hacked the system”—what made someone of his stature and fame deviate from the well-worn path of concertizing to found, for instance, The Silk Road Ensemble, or to collaborate with a street dancer for a 21st-century take on choreographer Mikhail Fokin’s The Dying Swan.

“I wasn’t necessarily aware that I was ‘hacking the system,’” Ma confessed. “But I did see a lot of things in the classical world that displeased me.”

Gates nodded appreciatively. “See, I use the word ‘hack’ when some values should be implicit, but they’re not,” he said. “[For example], why do we have to work so hard at diversifying our ensemble? It’s like how we have to bill this event as ‘Bach on the South Side,’ ’cause it ain’t already happening.”

Though just one brief “interruption,” Gates and Ma expressed hope that the Bach Marathon will be the first step in establishing a symbiotic guest-host relationship between the Civic musicians and young people living in the mid-South Side.

“How often do you know the community you’re playing for?” Ma asked the musicians. “Relationships are key to any creation. You may be guests in these venues, but when you begin to perform, you become a host.”

Gates agreed, and pointed out that the event’s success would be best gauged by its very immeasurability.

The performance schedule for December 3’s Bach Marathon is as follows:

11:30 am–2:00 pm: Brandenburg Concertos 1-6 and selections from The Art of Fugue, Christkindlmarket, 50 W Washington St.

All performances are free and open to the public.