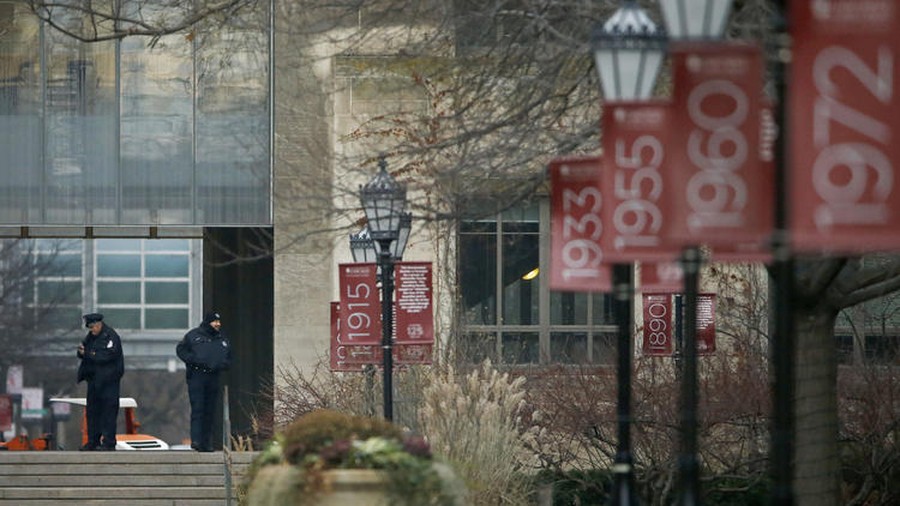 Classes and activities resumed normally Tuesday, following an online threat of gun violence reported Sunday night that shut down the Hyde Park campus on Monday. There will be an increased security presence across campus through the end of the autumn quarter, according to an e-mail sent to the University community by President Robert J. Zimmer.

On Monday Jabari R. Dean was arrested in connection with the threat and charged in court with transmitting a threat in interstate commerce. Dean, 21, is a University of Illinois at Chicago (UIC) student. If convicted, the charge carries a maximum sentence of five years in prison.

According to the criminal complaint filed by Special Agent Sean Burke, Dean admitted to posting the threat and said he removed it shortly after posting. According to the Sun-Times, investigators found no guns in his off-campus apartment. Dean was released into his mother’s custody on Tuesday and ordered not to use the Internet, according to DNAInfo. Federal prosecutors stated in court Monday that he did not have the means to carry out the threat.

The online threat was posted to worldstarhiphop.com and threatened to “execute approximately 16 white male students and or staff” in response to the fatal shooting of Laquan McDonald last year by a white Chicago Police Department officer, according to a CPD report obtained by the Chicago Tribune. The threat was posted in response to a movie clip from the 1995 movie *Panther*, and was reported to the FBI on Sunday morning by a New York resident.

It read: “This is my only warning. At 10AM Monday morning, I’m going to the campus quad of the University of Chicago. I will be armed with an M-4 carbine and two desert eagles, all fully loaded. I will execute approximately 16 white male students and or staff, which is the same number of time McDonald was killed. I will then die killing any number of white policeman in the process. This is not a joke. I am to do my part and rid the world of white devils. I expect you do the same.” Dean signed the post with the initials JRD and a Chicago Bulls logo, according to the police report.

The threat led to the closure of the Hyde Park campus on Monday. Classes and activities were cancelled, and campus facilities, libraries, gyms, cafes, the University bookstore, the Charter School campuses, and Laboratory schools were shut down.

“Based on the FBI’s assessment of this threat and recent tragic events at other campuses across the country, we have decided in consultation with federal and local law enforcement officials, to exercise caution by canceling all classes and activities on the Hyde Park campus through midnight on Monday,” Zimmer wrote an the e-mail sent Sunday evening.

According to an e-mail sent by Jennifer Luttig-Komrosky, there was extra security staff outside dormitories and dining halls. Cathey Dining Commons was open on Monday for students living in the Renee Granville-Grossman Residential Commons and Burton-Judson Courts. Bartlett Dining Commons and all campus cafes were closed.

UChicago students’ responses were mixed when they learned of the threat on Sunday night.

“I was really surprised,” fourth-year Peter Boxley said. “We’ve had snow days and lockdowns but I’ve never had a time when school was cancelled because there was some kind of violence issue, like a terrorist threat or a gunman. It was no school so I was excited but then I was like, ‘should I really be excited about that?’”

Claire Roosien, a fourth-year history Ph.D. student, was largely unconcerned when she received the first email from Zimmer. “Honestly, I wasn’t that worried,” she said. “I mean, I stayed off campus and everything, but there were people who didn’t even want to leave their houses, and I figured it was being taken care of.”

For philosophy graduate student Daniel Rodriguez-Navas, the threat localized the racially-charged violence and protests taking place on campuses across the country. “In a sense it brings it closer to home, all of these events that are happening around the country.”

He added that Zimmer’s initial email left him with many questions. “What happens after Monday, after campus is shut down, if the threat doesn’t get caught? How serious is the threat? Is it just someone who happened to say something somewhere online or was the person prepared? It was the kind of information not in the email that raised some concerns.”

Overall, however, students appeared pleased with the University’s decision to shut down campus and send periodic updates.

None of the students interviewed expressed concern for their continued safety, but Roosien said she is wary of the increased security presence promised by Zimmer.

“They were probably right to shut down campus,” she said. “Given the nature of the threat, it seemed reasonable. I am a little concerned about the heightened police and security presence that they’re now promising to have for the rest of the quarter because I don’t like that kind of atmosphere, especially given issues with police brutality and racial profiling with the UCPD.”

In his final e-mail on Monday, Zimmer wrote, “I want to express my great admiration for and appreciation of members of our community—including faculty, students, staff, and friends—for their mutually supportive and thoughtful approach in what has been a challenging day.”