“I just want people to realize how unsafe a lot of us feel on this campus and it means a lot that you all are here just willing to stand with us.” 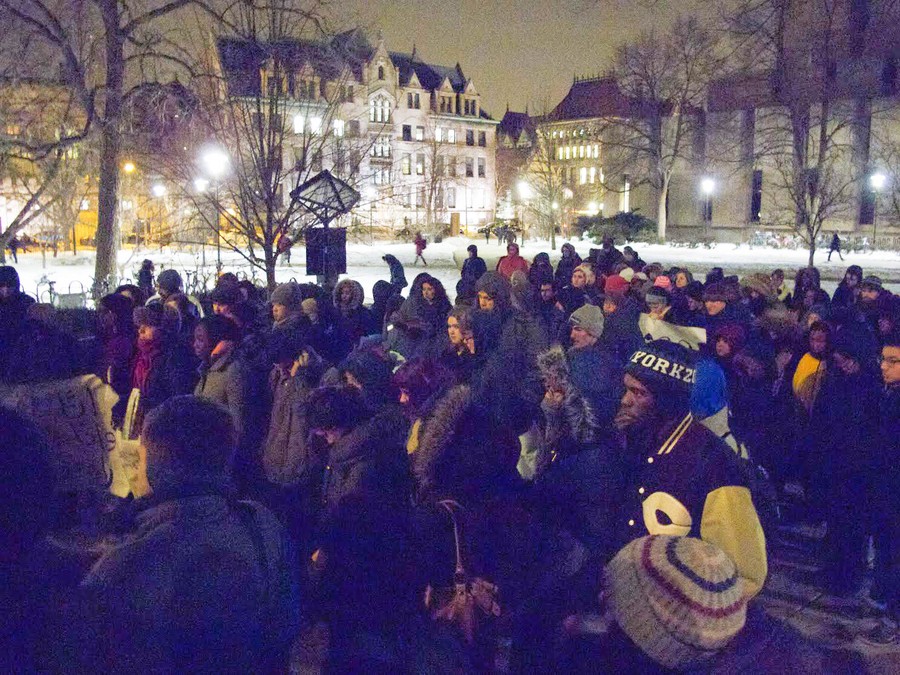 Police said that the incident allegedly occurred because of a dispute with a neighbor over parking, but the families of the victims believe that it was a hate crime, dating back to previous run-ins with the same neighbor.

People across the United States and the world have also criticized the media for not reporting on the news for at least eight hours after it occurred.

Third-year Maira Khwaja, who helped organize the vigil, discussed the importance of arranging this community response, even on such short notice.

“I think there is a lot of grieving and fear and concern in the Muslim community, and I think we want grieving together. That’s a strong tradition within the Muslim community, for people to mourn together and pray together,” Khwaja said. “Having it in such a public setting where allies can come to support is very comforting because we’re at a time right now where on our campuses, Muslim students feel harassed or unsafe, especially if they’re wearing hijabs.”

Fourth-year Sumaya Bouadi, a member of the Muslim Students Association and another organizer of the event, also discussed the need to create a more welcoming and inclusive environment for Muslims.

“I think there’s definitely a lot of tension. It’s not only a UChicago campus thing—it’s a United States thing,” Bouadi said. “People point this out in terms of the media coverage of this attack: It took eight hours for any media outlet to report it, and it had already exploded over the Internet by that point.”

The candlelit vigil outside Bartlett Dining Hall began with a welcome speech and prayer recited in both Arabic and English led by Imam Tahir Abdullah, assistant director of spiritual life and adviser for Muslim affairs at the University.

“Gatherings like these are proof that faith and prayer and the space to worship in community with others are essential, not tangential, to human life,” Abdullah said. “Whether you come from Syria or Nigeria or the South Side of Chicago, your lineage, your community, your historical memory about where you come from is precious and must be preserved and protected.”

Abdullah’s words were followed by a moment of Fatiha, a specially designated time of silence to recite the Surah al-Fatiha, a prayer for God’s guidance in the first chapter of the Quran.

Following these speakers, students and faculty were invited to share words, prayers, and poems in an open-mic format.

“This hints at a larger problem of people feeling unsafe because of how they look, what they believe in, the way they decide to practice their beliefs by wearing a headscarf,” said second-year and student vigil organizer Maha Ahmed. “I just want people to realize how unsafe a lot of us feel on this campus and it means a lot that you all are here just willing to stand with us.”