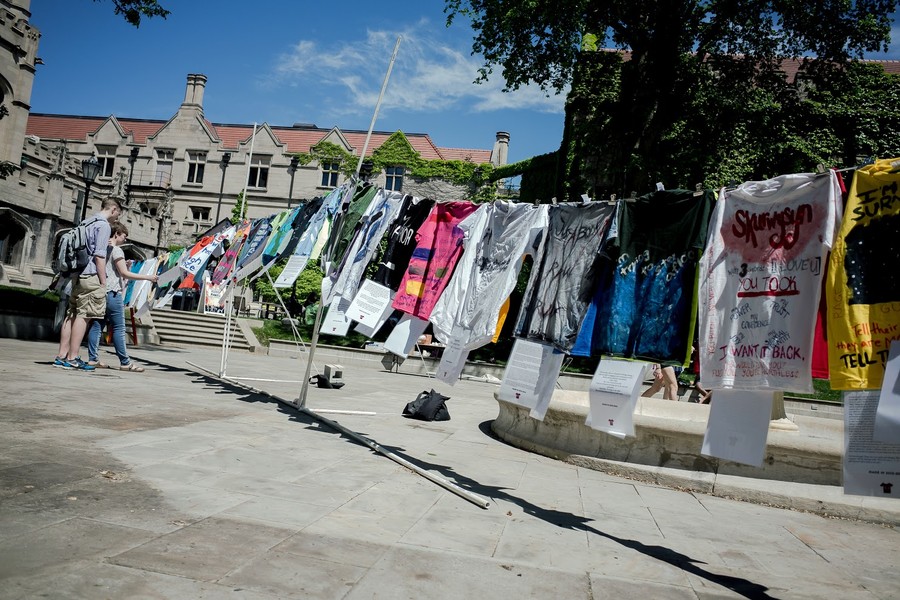 From May 17 to May 22, a wave of student-run anti-sexual violence events and initiatives washed over campus as part of Sexual Assault Awareness Week (SAAW). An allocation of $10,000 from Student Government and additional funding from the Campus Dialogue Fund, the Office of LGBTQ Life, and the Office of Multicultural Student Affairs (OMSA), along with the efforts of many students and RSOs, provided for a week’s worth of workshops, lectures, and artistic displays aimed at raising awareness about and working toward the prevention of sexual assault on campus.

Over the course of a week (with a few events occurring before and after the seven-day period), Lambda Pi Chi, Hillel, UChicago Clothesline Project, Phoenix Survivors Alliance, Risk Aware Consensual Kink, UChicago Amnesty International, Resources for Sexual Violence Prevention at UChicago, Know Your IX, Axis UChicago, and the Center for Gender and Sexuality Studies teamed up with the Student Government to host 21 different events.

Much of the week’s programming underscored the significance of recognizing marginalized groups in assault, with the keynote address including speakers that challenge conventional perceptions of victims. Veronica Portillo Heap, the Student Government coordinator of the week, described the misperceptions surrounding rape. She states: “Previously the only narrative of assault was [that it occurred to] women who were teenagers and young adults, and [the rape was perpetrated by] strangers jumping out of a bush.... I truly think the new version [of this stereotype] is gang rapes at fraternities....but there are so many other narratives that just aren't covered in the media.... It's not effective for social movements to focus on one.”

Olivia Ortiz, who served as a speaker for the keynote event and engaged in discussions on a series of panels, said in a phone call: “I'm someone who expressly does not fit that mold [of the white assault victim]: [I’m] brown [and] it was my partner and not a stranger... the media has treated me as a special case.... Black women survivors are all treated as special cases when in reality we are the norm according to data, so it’s hard to experience that marginalization. It’s very invalidating.”

A “Lunch with John Kelly” event during the Sexual Assault Awareness Week highlighted queer dating and assault. While a student at Tufts University, Kelly was the victim of same-sex sexual violence and became the first person to testify against dating violence within the LGBTQ community before the Senate. Their work has achieved a level of prominence, with features on NPR and a host of other media outlets.

“For a long time, Kelly was a sort of token male survivor.... I think one of the things good about John [is that they represent] survivor advocacy on campuses. A lot of the people who attended were survivors or genderqueer and/or activists. People who had things in common with the speaker [attended the speech], so it was very personal,” Portillo Heap said.

SAAW included a weeklong installation of the UChicago Clothesline Project, a campaign that seeks to magnify the voices of sexual assault survivors through art. The project at UChicago began in 2012 shortly after Angie Epifano, a former student at Amherst College, published a widely read essay on the mishandling of her sexual assault on campus in the Amherst student newspaper.

The project displayed 170 shirts hung from a clothesline spanning Hutch Courtyard, each one representing the story of a UChicago sexual assault survivor. Poems and narratives affixed with clothespins accompanied the suspended shirts.

A warning sign cautioned viewers entering the courtyard about the graphic, explicit content of some of the survivors’ stories.

“You will see hope, love, and healing,” read the sign. “You will also see anger, fear, and sadness. Each story is different, and each story took courage to share.”

“This project is extremely important because it amplifies the voices of those who have been affected by sexual violence—it isn’t statistics, it’s stories,” said second-year Sydelle Keisler, co-director of the UChicago Clothesline Project. “I think it’s important for survivors of this violence to have as many outlets to express themselves as possible.”

“I think the UChicago Clothesline Project is, in itself, a form of resistance,” Keisler continued. “Survivors at this school and in general are told to shut up about their assaults, and so they do… This project rejects the isolation that comes from sexual violence and encourages community instead.”

Third-year Leah Von Essen, official photographer and staff member of the Clothesline Project, commented on the potential impact of transforming trauma into art.

“We take these stories of people who have gone through terrible things, and they become art, and that art draws people in and causes an impression that no PSA or poster can,” she said. “We have so many diverse stories, some that break from the ‘common’ narrative that we see most represented in the media.”

Describing recent changes by the University, Ortiz said, “I think there will be some improvement this year, but it should be ongoing. There is a small office called Resources for Sexual Violence Prevention, and lots of students don't even know their office exists. [But] the University has a federal obligation to tell students these things.”