“We’re excited to keep building off the progress we’ve made." 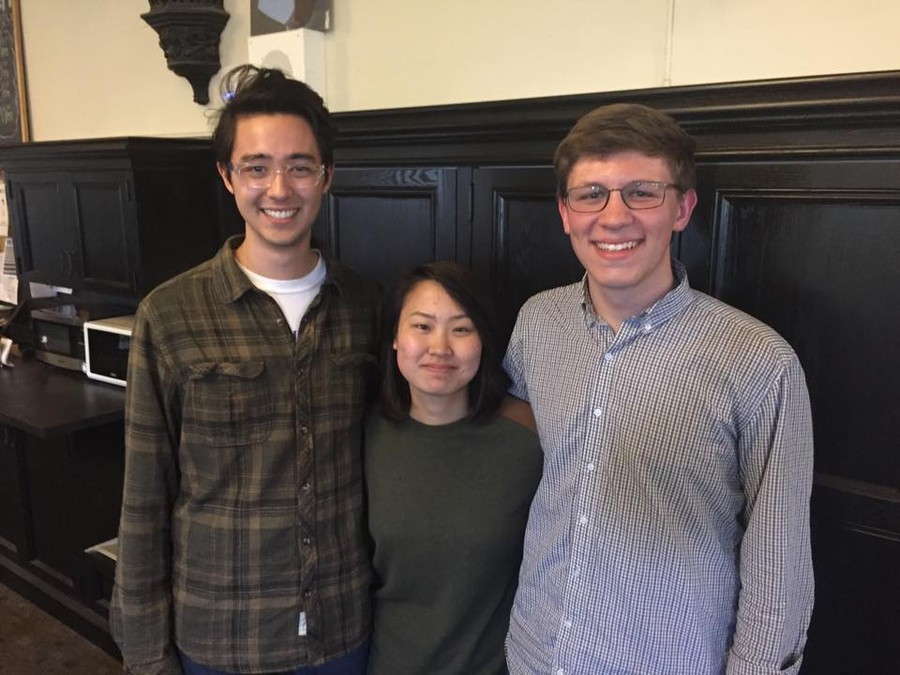 Tyler Kissinger, Alex Jung, and Kenzo Esquivel celebrated their victory with cake after the results were announced.

On Wednesday afternoon, results for the 2015 Student Government elections were released to the public. Turnout for this year’s election was much higher than last year’s, with 3,127 votes cast. This is a 57-percent increase over last year’s turnout of 1,991 votes cast, and is the largest student turnout since at least the 2011 elections.

United Progress, consisting of President Tyler Kissinger, Vice President for Administration Alex Jung, and Vice President for Student Affairs Kenzo Esquivel, won the race for Executive Slate by a huge margin, with 1,340 votes—more than all of the other slates combined. The Moose Party, The Very Good Slate, and One Slate, finished second, third, and fourth, respectively.

“This year, we’ve worked to make Student Government into a place where any student can come to substantially impact the way their University is governed,” Kissinger wrote in a statement. “We’re excited to keep building off the progress we’ve made this year in creating a more active and engaged SG, and look forward to making sure all students have the opportunity to take part in this process every step of the way.”

Andrew Young won the race for Undergraduate Liaison to the Board of Trustees, defeating Anthony Downer by more than 150 votes.

“I’m looking forward to making this position mean something to the student body. Next year I will work my absolute hardest to increase every student and RSO’s ability to communicate and connect with members of the Board of Trustees,” wrote Young in a statement. “In doing so, I hope to build a foundation that will prove critical in allowing us to shape the decisions of the Board.”

Katie Perri won the race for Graduate Liaison to the Board of Trustees by a large margin, with more than 50 percent of the total vote, defeating Eduardo Arenas Hernandez and Rafadi Hakim.

"I know I would not be in this position without the incredible support of graduate students across the University of Chicago, and especially at Booth. I have never felt so unconditionally supported by a group of people as I have by the Booth community in the last week," Perri wrote in an email.

Nina Katemauswa won the position of Community and Government Liaison. She was the only candidate running for the position who was on the ballot.

“I’m really excited and honored to have been elected as the Community and Government Liaison because I really think that this will get me the opportunity to be able to best serve the interests of low-income students, underrepresented students, sexual assault survivors, and all types of minority students whose voices might not have been heard otherwise,” Katemauswa said. “I look forward to working with all of the relevant RSOs on campus to allowing these positive changes for students and for the surrounding South Side community.”

The winners of the 2015 College Council Elections are listed below: