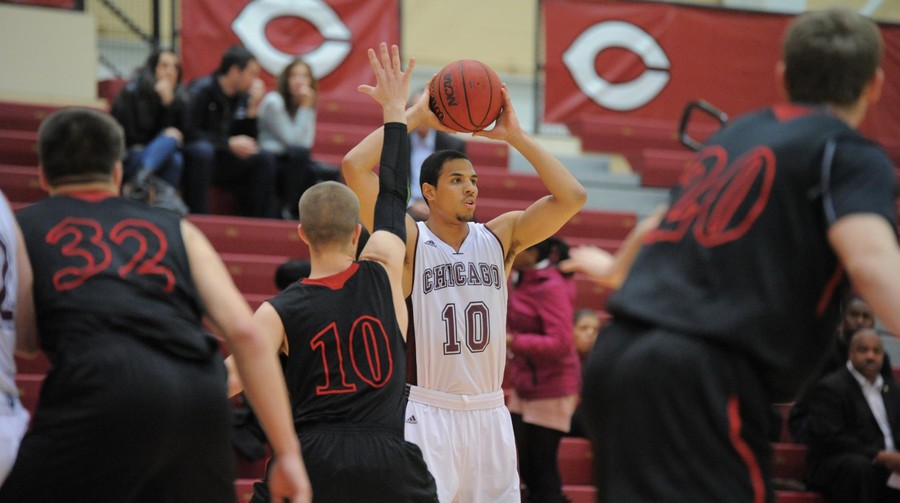 The No. 16 Chicago squad had a huge weekend on the road, first pushing past the Carnegie Mellon Tartans on Friday and then dominating the Case Western Spartans two days later.

The Maroons (12–2 overall) improved to 3–0 in conference play and are currently ranked No. 16 in the country, having won 11 games in a row. It was a long weekend for the team, as both games were away so the squad had to first travel to Pittsburgh for Carnegie Mellon, and then straight to Cleveland for Case Western, before finally returning home to Chicago.

The first game of the weekend was a 70–68 nail-biter against Carnegie Mellon. The two squads battled relentlessly for all 40 minutes, creating seven lead changes and seven ties throughout the game. Going into halftime, the Maroons were down by one but came back stronger in the second half to get the win.

The Tartans (7–7 overall) gave the nationally ranked Maroons all they could, but that was not enough. Third-year forward Blaine Crawford came off the bench, giving the Maroons a strong presence in the post. He joined fellow third-year forward Waller Perez scoring in double-digits on the night.

After the close game, the team packed up and headed to Cleveland for its next matchup against Case Western.

The team rebounded and looked dominant against an 8–6 Case Western squad. Despite again finding themselves down at halftime, the Maroons outscored the Spartans 61–46 in the second half. The high scoring game ended with the Maroons winning by 12, 112–100. Fourth-year forward Nathan Brooks, Perez, Howard, and second-year forward Collin Barthel all scored in double digits. Brooks earned a double-double on the night with 13 rebounds and 17 points.

The leading scorer of the day was fourth-year guard Jordan Smith, who tallied up 26 points and broke 1,000 total points in his career.

First-year Noah Karras talked about Smith and how much Smith means to the team: “Not only is Jordan such an outstanding basketball player, he is such a great guy. He’s always leading the way for our team in a positive manner. He’s also such a great influence and person to look up to. I know that us four freshmen really look up to him, and he’s always trying to help us on the court with things we don’t understand, and to also make us better people.”

As the Maroons continue into conference play, they will have a target on their backs, but the Maroons are ready for it. “There is a high sense of expectations, but once the games start, I think the guys have a lot more confidence in their abilities which has really been able to carry us through these tough away games,” Barthel said. “As the rest of the season goes, I think we will continue to take it one game at a time and continue to play basketball we know our guys are capable of playing.”

The first-years also got to make an appearance against Case Western, earning valuable experience from a talented opponent. Named the “white squad” for the color of the jersey worn during practice, they have gotten more playing time as the season has gone on.

“The white squad checked in with two minutes to go in the game, with the lead being the smallest of any game the white squad played before,” Shearmire said. “It was great experience to play against a good team’s starters with high stakes.”

The Maroons’ next game is this Friday against No. 15 New York University.