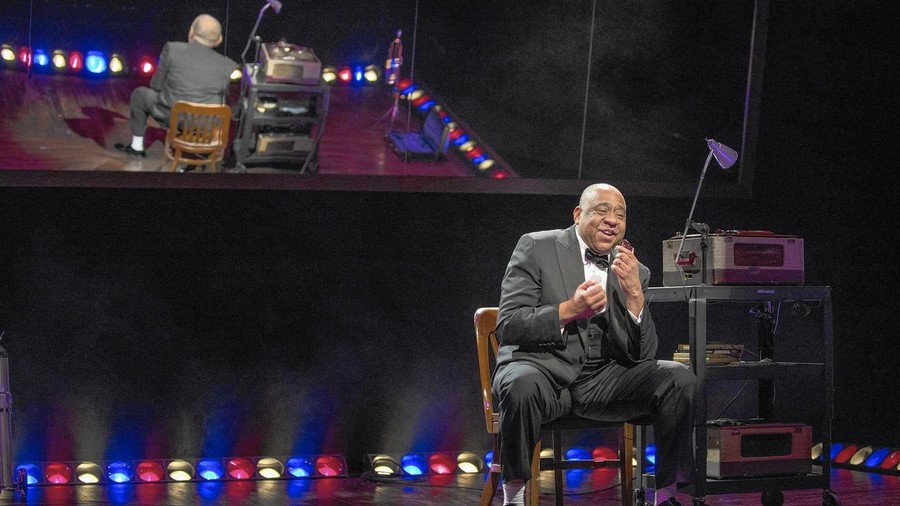 Barry Shabaka Henley stars as Louis Armstrong in the Court’s Satchmo at the Waldorf.

By 1971, Louis Armstrong, affectionately dubbed “Satchmo,” had long since deviated from the trailblazing jazz pathways he had forged throughout the 1920s and ’30s. Instead, he fully embraced the role of American icon; familiar and palatable, Armstrong’s affable and charismatic persona enabled him to succeed as a black entertainer in a white-dominated industry. As he aged, his musical accomplishments took a backseat to his grandfatherly stage presence, and by the advent of the 1960s, Armstrong felt his relevancy—particularly with black audiences—slipping away at the hands of more socially conscious and politically outspoken musicians.

Satchmo at the Waldorf, written by Terry Teachout and directed by Charles Newell, portrays Armstrong after what would be his last public performance—only months before his death at 70—in the dressing room of New York’s luxurious Waldorf Astoria Hotel. The aging trumpeter, now reliant on an oxygen tank, chronicles the story of his life in a spartan stage setup, from his childhood as the illegitimate son of a New Orleans prostitute to top billing at America’s most prestigious venues.

Actor Barry Shabaka Henley is brilliant as Armstrong. One-man, biopic-style productions often force the actor to take on rigid, exact characterizations, but Henley’s Satchmo is looser, more relatable. His voice, musical and gravelly, is full of Armstrong’s trademark warmth, but also colored with the melancholy of a man who knows his life is nearly over.

Although Henley is the only actor on stage, he plays two characters other than Armstrong: Joe Glaser, Armstrong’s longtime manager, and Miles Davis, a caricature of the jazzcat aesthetic embodied by Davis and Dizzy Gillespie. Glaser, a Chicago-born son of Russian Jewish immigrants, was perhaps as well known for his connections to the mob as he was as for representing jazz legends Armstrong, Benny Goodman, and Dave Brubeck. Henley, when he assumes Glaser’s persona, abandons Armstrong’s slouch and dons a sharp, tough Chicago accent and swagger. When he portrays Davis, the lights dim and Henley adopts a silky, pretentious tone: he chastises Armstrong as a relic, a sell-out who abandoned black America to win favor with white audiences. (“Louis, he’s got to play the clown. Nod his head and grin real big like he’s some kind of old-time darky.”)

While Glaser and Davis certainly add texture to the performance, and briefly give Henley vehicles other than Armstrong, neither of these auxiliary characters are true antagonists or foils. Glaser represents the shady underworld that Armstrong was forced to navigate to achieve success, and Davis adds terrific doses of cynical comedy (although Henley’s Armstrong offers plenty in the way of laughs as well).

Although Armstrong seldom spoke out regarding issues of race during his life, race is omnipresent in Armstrong’s solitary confessional. In one scene, he reminisces coldly on his early career, when he headlined clubs and hotels that would make him eat dinner in the kitchen. In one of the most energetic segments of the play, Armstrong decries President Eisenhower for refusing to act during the Little Rock desegregation crisis of 1957.

Teachout’s dialogue seems to emphasize that while Armstrong never attempted to hide his identity as a black man, he never completely embraced the idea of himself as a black artist, either. For Teachout’s Armstrong, music was about making people—white people, black people, all sorts of people—happy.

Despite these noble intentions, some, such as Davis, could never look past the fact that, in a period of high racial discontent, Armstrong was less than willing to take a stand on civil rights. Instead, he only smiled, laughed, and played in front of audiences so predominantly white that they resembled “a carton of eggs.”