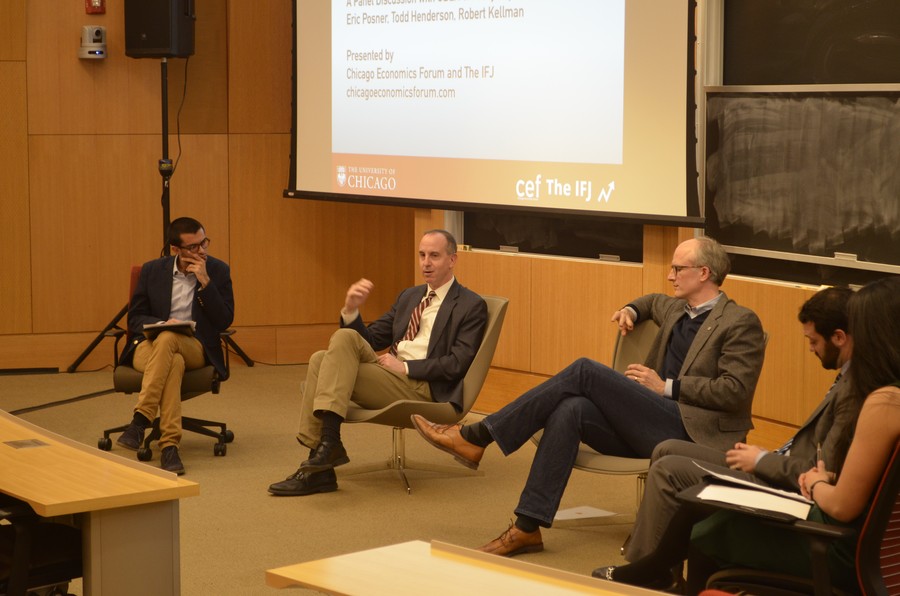 The event aimed to address three topics: Uber’s growth and strategies, the company’s challenges, and the rise of the sharing economy in general.

Henderson, the Michael J. Marks Professor of Law and Mark Claster Mamolen Research Scholar, observed that Uber’s rise is simply a variant of the larger trend towards services such as Amazon and eBay that rely on the self-regulation of customer reviews as a cornerstone of their business models. In addition, Uber does not compete with a field dominated by entrenched private companies. Rather, it targets failings of the government.

“What Uber does that’s interesting to me, is—they don’t challenge incumbent businesses. Their business model is to be in direct competition with government. Their rival is the City of Chicago’s taxi commission. They come to the people and say ‘we offer a better system for regulating cabs through our star system rating. If you rate the ride one star you get your money back, and all the while you can track it on GPS.’ That’s a better regulator than a taxi commission. They’re trying to go after inefficient regulation,” Henderson said.

Kellman, Uber’s representative, spoke of how the company offers opportunities for both riders and customers. “Parts of this city and many others once had no access to transportation five years ago. Now everyone takes it for granted that you can just open up a phone app and within five minutes have a car in front of you. That kind of freedom and connectivity does incredible things for cities. The opportunities for everyone are massive,” he said.

He went on to note that in June, Uber announced its intent to create 10,000 driving jobs on the South and West sides of Chicago in twelve months. They were more than halfway to their mark after four.

The panel mainly disagreed over whether Uber should be regulated by the government. Posner suggested that such regulation would be inevitable, and that Uber would establish a monopoly by displacing taxi companies completely. Otherwise, he suggested that multiple ride-sharing companies would dominate the market, and price haggling would become the norm.

Both Henderson and Kellman disagreed with Posner, arguing that Uber serves a different market than taxis—citing the idea that in congested downtown areas such as the Loop, taxis would maintain dominance. To emphasize this point, Kellman mentioned that prior to the entry of Uber, San Francisco International Airport saw 150,000 to 160,000 taxi rides per month. In the time after Uber’s introduction, however, Uber served roughly 250,000 people per month while the taxis maintained their numbers.

Henderson and Kellman further argued that Uber is much more efficient without government regulation. “Uber has created a model that is inherently efficient, that responds to changes in demand nearly instantaneously. It can adjust to the pressures of the market in real time,” Kellman said.

Henderson spoke of Las Vegas as an example of government inefficiency in response to cabs taking purposely circuitous routes—‘long hauling’ their customers. “They tried a report system where they would have people, when they felt they were cheated, fill out an affidavit in the hopes that they would gain reimbursement through hearings. They tried a system of roadblocks where they would stop cabs, ask where they were going, and if they said the Strip, riders were handed a piece of paper that said ‘head to this hearing and you can get your money back’. They delayed people from getting to where they want to go in order to give them an opportunity to be further delayed. This is the way the government works.”

The event was held by the newly formed Chicago Economics Forum and co-sponsored by the Intercollegiate Finance Journal.