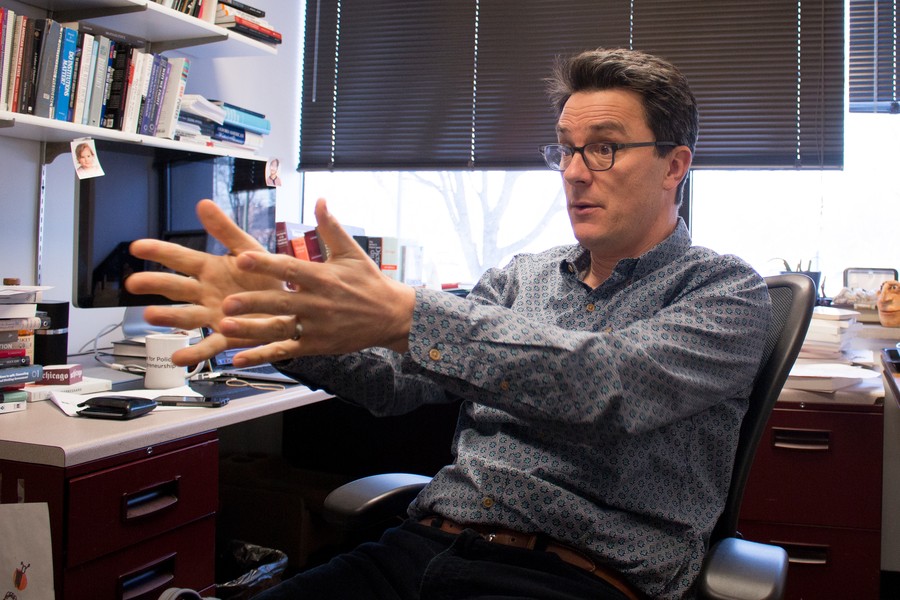 William Howell, a professor of political science at the Harris School of Public Policy, published the results of a controversial survey about tenure last month. Howell administered the survey in September to faculty at the University of Wisconsin (UW), where it raised many questions about anonymity, the format of the questions, and whether the results could be used against faculty in the state legislature’s debates over tenure protection in the UW system.

Overall, the survey had a 22 percent response rate, which, according to Barry Burden, a UW political science professor, may not be representative of the UW faculty population as a whole. Several professors did not complete the survey once they had started it and more than 200 participants also opted out of the survey after completing it due to the concerns mentioned above.

Howell had decided to administer the survey because tenure issues have been particularly contentious at UW, after the legislature eliminated tenure from the state statute in June. However, he did not anticipate the extent of discontent with the survey.

“I was surprised at just how live an issue it is,” Howell said. “When I wanted to go out there and do the survey I thought…it’s controversial, it’s relevant, but didn’t realize that the anxiety is right there.”

The results of the survey reaffirm UW faculty’s anxiety over losing tenure. When asked how they would respond if tenure were replaced with renewable contracts and corresponding salary increases, nearly 90 percent of participants said they would consider leaving the state of Wisconsin altogether to teach at universities elsewhere.

“If I undertake a project, I think about a timeline, [i]t may take 10 years but I have protection to pursue that line of inquiry and figure out if it’s going anywhere. But I don’t know if I would pursue it if my contract was up for renewal every few years,” he said.

Burden agreed. Tenure is “a protection of ideas, a mechanism to support faculty to pursue research or teach courses in a way that…isn’t conventional wisdom, or popular, or expected. It’s really at the heart of what a university is,” he said.

Howell explained that this trend is not unique to the University of Wisconsin.

“There’s been a much larger conversation about the humanities’ role, and the country has seen a decrease in funding for humanities, in humanities majors, and a shift in discourse about the purpose of higher education and whether or not you’ll get a job,” he said. “In those areas members of the humanities are disadvantaged.”

Several professors worried that even if their responses remained anonymous, they could be used for political purposes. At the time, rumors circulated that the survey had been funded by the American Legislative Exchange Council (ALEC), a group that writes and promotes conservative legislation in state, though this was later proved untrue.

Burden added, “even if the survey was well-intentioned, well-designed, and carefully analyzed by the researcher, there’s still a fear that journalists or advocates or politicians might try to spin the data to their advantage.”

A UW professor of population and health sciences, David Vanness, quit the survey halfway through because he did not agree with the presentation of the questions.

“I was uncomfortable with…the statements and wanted to leave [the question] blank but the software did not allow me to do so,” he said.

While the issue of tenure is currently pertinent in Wisconsin, it is, according to Howell, less so in other states and especially at private universities.

“At the University of Chicago we don’t have a state legislature breathing down our necks, one that looks skeptically upon the name of open-ended inquiry,” Howell said. Working at a private university “allows me to take risks like [putting out this survey]. I had notions and ideas and didn’t know if they’d pay off and if I’d been more constrained they would’ve been more watered down.”

To Howell, the University of Chicago’s response to the controversy demonstrated its specific commitment to academic freedom.

“I felt incredibly supported by the University of Chicago,” he said. “I know that this institution’s commitment to free and open inquiry is often discussed…in the abstract…but I really came to feel…and deeply appreciate it in its aftermath.”