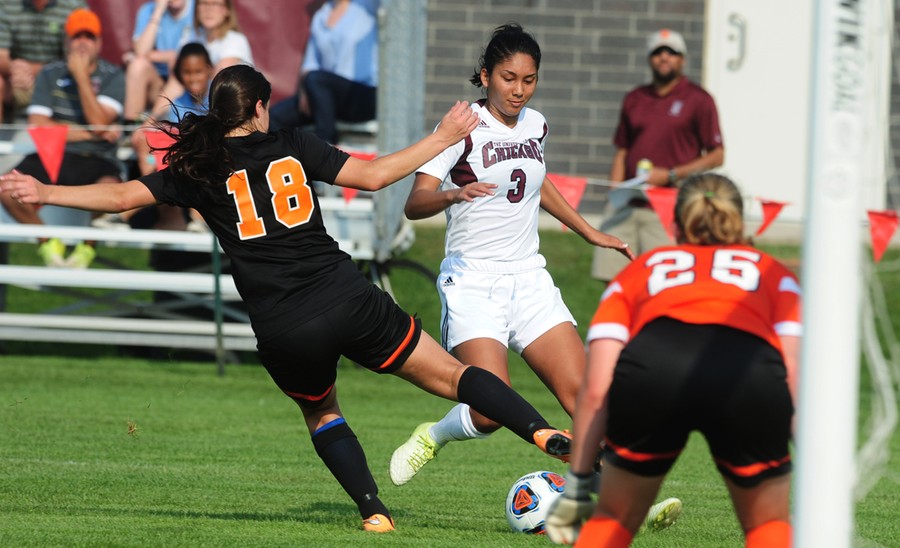 Kelsey Moore avoids a defender as she dribbles up the field.

Following its first loss of the year, the Chicago squad responded by beating the University of Rochester 1–0, improving its record to 10–1 overall, 1–1 UAA. Rochester dropped to 2–5–4 overall and 1–1 UAA.

After coasting through non-conference play, the No. 6 ranked Maroons came up short in their first UAA game last week against Emory University. Third-year defender Kaitlin Price commented on the team’s work ethic and renewed focus following that loss in preparing for the Yellowjackets. “Our heads were in the right place,” she said. “It was hard to lose the way we did because we got outworked. So the next week of practice we did a lot of competitive games. We knew that we needed to work hard with and for each other to get the outcome we wanted.”

The game was a nail-biter, as it remained 0–0 until the 80th minute when first-year Rachel Dias broke through to score the game winner with help from fellow first-year Clare Suter and third-year Caroline Olivero. Chicago tallied 21 shots on the day, with 15 coming in its second half barrage of Rochester. Ten of the Maroons’ 16 corner kicks also came in that second half push to take the lead.

“I think we stayed very calm throughout the entire game. We have gone through games where we have had a hard time scoring, so no one freaked out,” Price said. “Of course it would have been great to have put one away earlier than we did but with the momentum we had, we all believed the goal would come.”

First-year goalkeeper Katie Donovan made four saves for her sixth shutout of the year. The Maroon defense stifled the Yellowjackets’ attack, only allowing them six shots in the game.

Fourth-year Sophia Kim commented on how important this win was. She said, “This win was absolutely huge because the UAA is arguably the hardest conference in the country, and 3-4 teams on average advance to the tournament, so every win is big points. We’re training harder than ever since conference has started, and we’re fired up to continue upsetting teams. We really have an amazing group that I fully believe can make it to the finals this year.”

Three of Chicago’s remaining UAA games are against opponents who are nationally ranked, starting this Friday against No. 8 Brandeis University. Despite starting conference play with a loss, the Maroons can still win the UAA outright since every team has at least one conference loss of its own.

“UAA play has been great,” Price added. “We finally get to see good, hard teams that give us some challenges. These games are fun because conference games are never easy and they mean a little bit more to everyone on the team. Everyone has a loss, so the conference title is still up for grabs, which makes it that much more fun to play with each other.”

The women’s soccer team will play again this Friday at 3 p.m. at home versus Brandeis University.