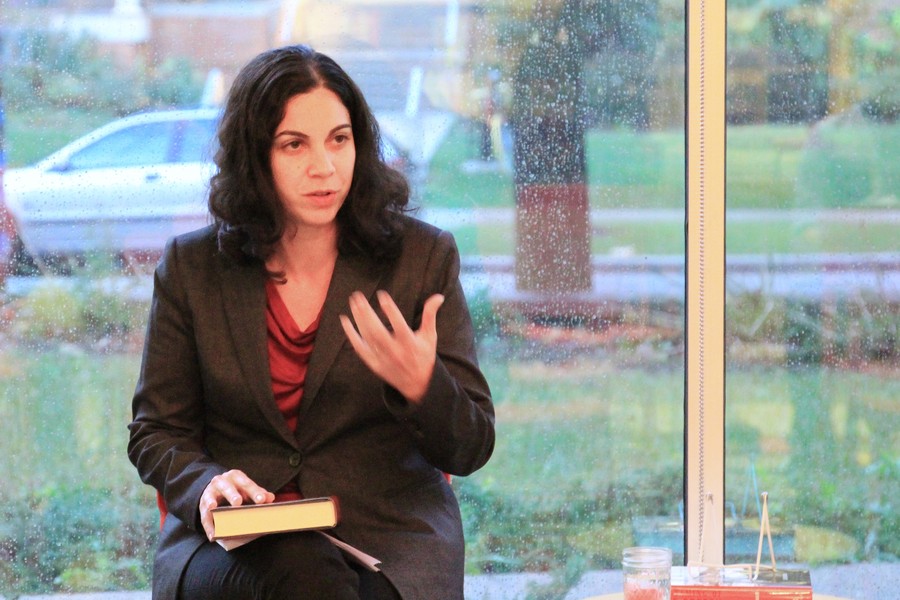 Laura Weinrib discusses her book The Taming of Free Speech: America's Civil Liberties Compromise on Oct. 6 at the Seminary Co-op.

A Law School professor led a discussion on Thursday evening on how judicial enforcement of free speech was reached through compromise between liberals and conservatives in the early twentieth century.

After reading the book’s first few pages, Weinrib described modern America’s conception of free speech: the idea “that people are free to stand on the street corner or publish a journal with the most inflammatory, unpopular, subversive sorts of arguments, and the First Amendment supports them in this.” Weinrib argued that this liberty is fairly recent, as illustrated by the lax oversight of courts over Congressional free speech restrictions before 1925.

According to Weinrib, law historians have traditionally attributed the shift in judicial interpretation of free speech to a realization of its importance after stringent government restrictions on speech during World War I. Weinrib said the conventional view holds that “this repression was so obviously bad, it chilled speech to such an extent, that a number of important thinkers, legal theorists, and especially a couple of very important Supreme Court justices awoke to the importance of a robust commitment to free speech enforced by the First Amendment.”

The Taming of Free Speech claims the opposite: the emergence of free speech as a protected doctrine occurred despite, not because of, the courts. The movement toward free speech was also both more radical and conservative than is typically assumed, Weinrib said.

Weinrib identified two phases in the development of free speech: the 1910s through the 1920s, dominated by progressive defense of strikes, boycotts, and other economic activities, and the 1930s through the 1940s, marked by conservatives’ use of the First Amendment to protect corporations’ privacy.

Progressives distrusted courts and viewed them as backing the interests of industries over the rights of workers, Weinrib said. The American Civil Liberties Union (ACLU), founded in 1920, called to eliminate judicial review—a sharp contrast, Weinrib observed, to its focus today on slashing laws it feels constrain individual liberties.

In order to retain authority, courts drifted away from the Interstate Commerce Clause and toward the First Amendment to defend corporate rights, Weinrib said. This ushered in the second age of the free speech movement, marked by cases like National Labor Relations Board v. Ford Motor Co. (1940), as a result of which Ford was allowed to distribute anti-union pamphlets to its employees.

Asked how her project came about, Weinrib revealed that she originally planned to study internal ACLU conflicts and “places where there was a clash between what seemed like two liberal values: equality and autonomy.” The real story, however, proved more complex.

“This was a surprise,” she said. “This was not what I expected when I set out to research this book.”