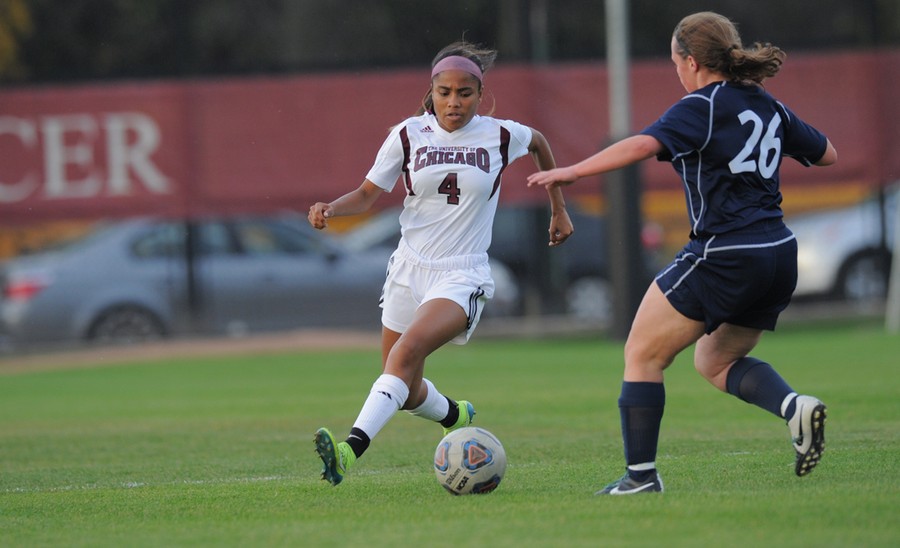 Second-year defender Sydney Mathis runs the ball past a defender.

The No. 11 women’s soccer team looks to keep rolling this weekend with its first doubleheader of UAA competition. On Friday the Maroons will face No. 8 Brandeis, followed by a Sunday match up against NYU for Senior Day.

Both opponents are coming to Chicago riding a successful season thus far. The first match up pits the Maroons (10–1, 1–1 UAA) against the Brandeis Judges who have yet to suffer a loss and are sitting at a clip of 12–0–1, 2–0 UAA. The second contest of the weekend features a face off against the NYU Violets (7–1–1; 0–1–1 UAA). The last match up against the Violets in 2015 ended in favor of the Maroons in a double-overtime 2–1 victory.

This weekend will be a true test for the Maroons, facing two successful programs back-to-back.

Noting how the team has been preparing for the upcoming weekend, fourth-year Sophia Kim said, “To prep for a double header we have to be smart about how we practice and how we play in the first game. Training has been extremely competitive since conference has started, but we are still 1–1 in the UAA and we need to train hard but efficiently so we can play 100% both games. Getting the job done in the first 90 min will be critical for us to maximize our chances of winning. Coming out of this weekend 3–1 in conference will be massive for our record.”

The Maroons will need to be battling for every ball start to finish this weekend in order to knock off both teams and solidify their place at the top of the rankings. If Chicago can take two W’s this weekend, the squad will likely return to the top 10 in the national rankings.

“Handing Brandeis their first loss will completely shift the UAA standings,” said Kim. “The conference is wide open right now as almost every team has a loss. We did it to them last year though and we’ll do it again this weekend: play our game and play smart. Beating Rochester last weekend was a team win and everyone needed to contribute in order for us to come out on top, and we’ll need to do the same to beat Brandeis, who is consistently one of our toughest games of the year”.

While their season is far from over, the South Siders will take a moment on Sunday to acknowledge their three seniors and what they’ve given to the program over the last four years. The senior class, made up of Anase Asom, Sophia Kim, and Lily Wolfenzon, has compiled a record of 49–18–4, giving them an impressive .731 winning percentage over their tenure. Plus, they are on track to add more wins and another NCAA playoff run.

“Sophia, Anase, and Lily always bring a competitive edge that really energizes the whole team,” said first-year goalkeeper Katie Donovan. “They always motivate us and keep the team positive, even when we are in tough situations. This ability to compete and uplift the team has been such a positive force throughout the whole season and will really be missed next year.”

The Maroons kick-off the weekend on Friday at 3 p.m. and will also see action at 11 a.m. on Sunday for Senior Day.