"These people,” Heilemann said, gesturing around the lecture hall, “are entitled and happy.” 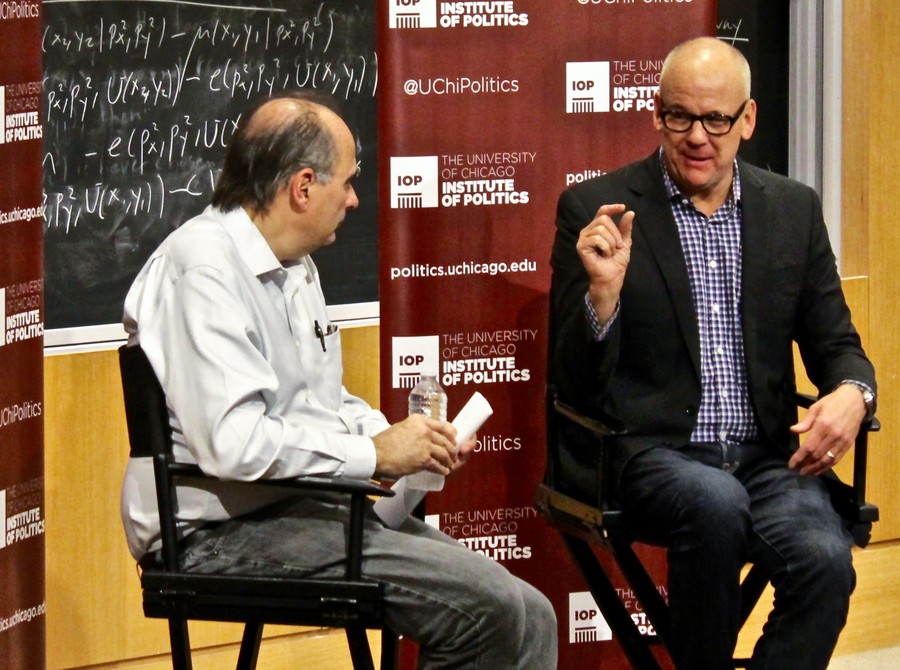 David Axelrod met with John Heilemann, co-managing editor of Bloomberg Politics, at Saieh Hall on Monday, in the latest of his  Decoding 2016  series of guest talks. Heilemann also covers U.S. politics for  New York  magazine, and is a frequent contributor on MSNBC.

Heilemann opened the talk with the claim that the presidential race is over, and Hillary Clinton will be our next president, barring “intervening or exogenous events.”

“A huge terrorist 9/11 scale event on U.S. soil, I don’t know what that does to the political dynamics. A piece of WikiLeaks e-mail that in a clear way found Hillary Clinton guilty of some criminal conduct. Hillary Clinton collapses on stage in the third debate. Those things could change the electoral dynamics,” Heilemann said.

Axelrod asked Heilemann to speak to the economic conditions that have given rise to Trump.

“For 30 years, life has sucked for somewhere between 40 and 50 percent of the American people. The wages have been stagnant or falling, they don’t believe their kids are gonna be better off than they have been, the death of the American dream… all of that’s really deep, and people are pissed off. Like,  pissed off . Not any of you, and not any of the people we all hang out with, mostly. These people,” Heilemann said, gesturing around the lecture hall, “are entitled and happy.”

Axelrod looked around the lecture hall. “How many are entitled and happy?” he asked. Most students raised their hands.

As Trump has slipped in the polls, he has ramped up his claims that the election will be rigged against him. Heilemann thinks Trump may be positioning himself for a post-election business opportunity.

“25 million people who are virulently anti-Clinton and believe the election was stolen, that’s a pretty good market opportunity—if you want to start a radio network, a television network, a website, if you want to become the new farther right rival to Fox News, you want to team up with Steve Bannon, who’s now running your campaign, call it Breitbart-Trump network,” Heilemann said.

As the pair discussed the future of what Heilemann called a “deeply fractured” Republican party, they emphasized the importance of Clinton’s margin of victory.

If Clinton wins narrowly, “Trump will say three things. One, the election was stolen at the ballot box. Two, the media was stacked against me. And three, the Republican establishment fucked me. With Paul Ryan and the rest of those Republicans, we would have carried it… He will exacerbate that, and will drive towards a civil war within the party,” Heilemann said.

Heilemann hopes for a Democrat-controlled Senate but wants to see Paul Ryan lead a slim Republican majority in the House, without which he doesn’t think Ryan will be able to corral Republican support for any bipartisan measures.